A Close Reading of the Best Opening Paragraph of All Time

From Shirley Jackson's We Have Always Lived in the Castle, of course

One hundred and one years ago today, Shirley Jackson was born. During her lifetime, she wrote “The Lottery,” and The Haunting of Hill House, and We Have Always Lived in the Castle, the latter of which features what I consider to be the best first paragraph of all time, or at least of any novel that I have ever read. Here it is:

My name is Mary Katherine Blackwood. I am eighteen years old, and I live with my sister Constance. I have often thought that with any luck at all I could have been born a werewolf, because the two middle fingers on both my hands are the same length, but I have had to be content with what I had. I dislike washing myself, and dogs, and noise. I like my sister Constance, and Richard Plantagenet, and Amanita phalloides, the death-cup mushroom. Everyone else in my family is dead.

It almost seems like overkill to explain why this paragraph is so wonderful. It either strikes you or it doesn’t. You must have a certain sensibility to truly appreciate its charms. The rhythm is key. But let’s make an attempt, shall we?

It begins straightforwardly, with our narrator’s name—a somewhat old-fashioned way of opening a book, appropriate for our somewhat old-fashioned, or at least sheltered, perhaps even stunted, narrator. And what a name it is—a somewhat old-fashioned name, Mary Katherine Blackwood, evocative of witch trials and cultists, dense trees in far-away continents and Nancy Drew mysteries (The Ghost of Blackwood Hall was published 14 years prior to We Have Always Lived in the Castle). She tells us she is eighteen, but by the very next sentence, she already sounds younger, and she sounds younger still by the third (“I dislike washing myself” is a prim schoolgirl’s complaint—well, prim in tone if not in meaning). This too presages what will we come to discover about Merricat (for that is what she is most often called), who lives by a logic quite disconnected from that of the the adult world, i.e. the world of men, the world exterior to her cherished sororal bond, and who will aggressively reject all encroachments by same.

The real delight, for me, begins in that third sentence, which wiggles beautifully. First, we learn that Merricat wishes she were a werewolf, and so we know that she is a girl who wants magic, but a particular kind of magic—feral, earthy—and also power, and also transcendence. But it’s not only that she wishes she were a werewolf, but that with any luck at all the fact that two of her fingers are the same length would have made her one, but it hasn’t. She considers herself unlucky. She realizes that magic exists, but in this case it has passed her by. The perfect surreality of her matter-of-fact association—the length of her fingers to her potential as a werewolf—signals that Merricat is a magical thinker, and a confident one. We are entering a different world, Jackson is telling us, and it is definitively Merricat’s world. Submit to her logic or give up now. The third clause in that wiggly third sentence, I have had to be content with what I had, is almost ominous on second read—considering what exactly she’s done with what she has—but the prim stiff-upper-lipness of it is so fantastic. She is talking about not being a werewolf, remember. We all must make do with that particular shortcoming.

Next, two lists—who doesn’t love a good list?—of likes and dislikes, much like a child keeping track of her own opinions in her journal. The dislikes are slightly discordant. I would assume that a girl who dislikes washing herself would rather go in for dogs and noise, but Merricat is not simply an overgrown, magic-practicing tomboy; she is also a member of a family almost entirely cut off from society. Dogs and noise mean townspeople, and the townspeople do not care for the Blackwoods, or at least the Blackwoods who are left.

As for her likes: first we get a second pointed mention of Constance in twice as many lines, which should alert us to her importance. Richard Plantagenet, second on her list of likes, is rather more obscure. She could be referring to a number of people, including Richard the Lionheart, but she probably means the third Duke of York, whose claim to the throne (then-occupied by a weak and mentally ill Henry VI) was a primary cause of the Wars of the Roses. In 1460, the English Parliament compromised and declared that Richard would succeed to the throne after Henry VI’s death, but he was killed in battle by the Lancaster forces, and his son wound up becoming king instead. The mnemonic “Richard Of York Gave Battle In Vain” is used to remember the order of the colors in the rainbow. So at any rate, now we know we’re dealing with a teenage girl bizarre and erudite enough to name a member of an ancient English dynasty, killed before he could achieve the goal he’d fought his whole life for, as one of her three favorite things.

The third favorite thing, of course, is a poisonous mushroom. This should set off certain alarm bells, especially when it is immediately followed by the revelation that everyone in her family is dead. I also count this revelation as a third mention of Constance.

It is coercive, this first paragraph. I find it impossible not to go on reading after reaching the end of it, yes, even now, when I am supposed to be writing this close reading for Literary Hub. One of my best writing teachers used to ask her class, after finishing a novel, to go back and read the first paragraph for the ways in which it predicted the rest of the text, or in the most skillful cases, taught us to read it. This paragraph is brilliant because of Merricat’s voice, and so is the rest of the book. It immediately teaches us who she is, and what this book is going to be like. That is, it gives us, in a few scant lines, a strong impression of an unusual character, and also presents all of the major themes of the novel: isolation, protective interiority, obscurity, loyalty (at least to Constance—who rings like a bell in Merricat’s mind), natural magic, poison, death, mystery. It plunges us immediately into the world that will occupy us for the next 150-odd pages, and also, in retrospect, pretty much gives away the ending. You’d think that wouldn’t necessarily be a quality of a good opening paragraph, but turns out not everything that makes this opening paragraph good can be close-read. Some of it, necessarily, is ineffable. Maybe even magic. 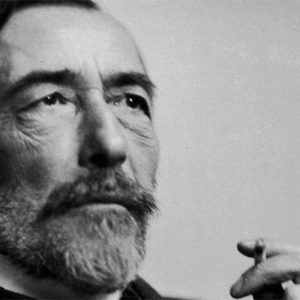 Edward Garnett’s daily job of ploughing through all the manuscripts submitted to Unwin by authors considerably less accomplished...
© LitHub
Back to top