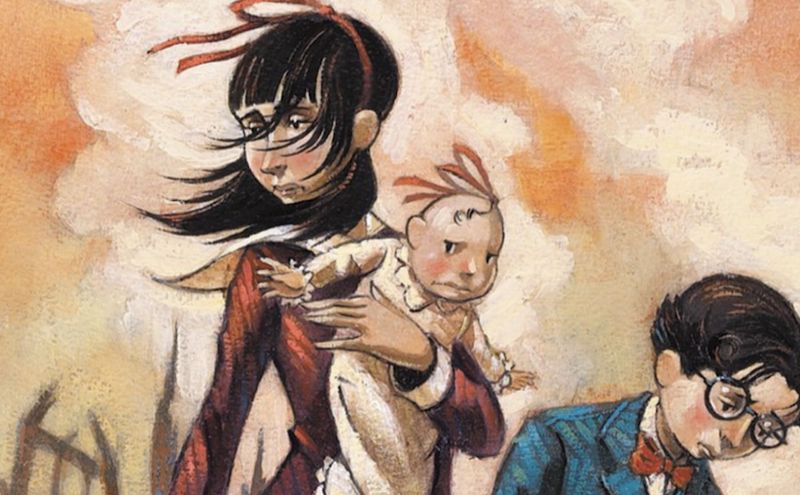 A brief ode to A Series of Unfortunate Events (also known as baby’s first metafiction).

A Series of Unfortunate Events looms large over my childhood. It was my favorite series growing up. Personally, I was never a Harry Potter person. I know you, dear open-minded reader of this site, won’t @ me, but the children of P.S. 153 could be so cruel, teasing me for my differing tastes. “But there’s magic in this series!” they would protest. And I’d dig my heels in. There didn’t need to be spells and wands and flying cars for my favorite series to be magical. It was all in the writing! (I was not cool.)

Many years and one experimental fiction class at a liberal arts college later, and I have the language to explain why Lemony Snicket’s stories held such power over me. The series was, when you really think about it, a child’s introduction to metafiction, a word which here means a story in which the author intentionally shows their hand, tips their hat, and alludes to the artificiality of a work by parodying or diverging from traditional narrative conventions.

Let’s look at the opening lines from The Bad Beginning, shall we?

If you are interested in stories with happy endings, you would be better off reading some other book. In this book, not only is there no happy ending, there is no happy beginning and very few happy things in the middle. This is because not very many happy things happened in the lives of the three Baudelaire youngsters. Violet, Klaus, and Sunny Baudelaire were intelligent children, and they were charming, and resourceful, and had pleasant facial features, but they were extremely unlucky, and most everything that happened to them was rife with misfortune, misery, and despair. I’m sorry to tell you this, but that is how the story goes.

Spine-chilling! The magic is right there in the first line. If you. You, dear child, holding this book in your hands, passing your eyes across this page. Yes, you! When you’re a kid, every story begins “Once upon a time…” and takes place in a faraway land that you are not allowed to go to because you cannot cross the street. So isn’t it special and delightful to open a book and find that the writer is taking directly to you? It catches you off guard. (The only time I can recall encountering a similar surprise is earlier this year, when I finally picked up Italo Calvino’s If on a winter’s night a traveler, which begins by encouraging you to fetch your tea and empty your bladder and get comfortable in your chair. If I’m being honest, I can be quite needy as a reader, and I strongly feel that not enough stories begin by feigning interest in my current condition.)

The opening passage goes on to dissuade you from reading any further, which is a brilliant move because obviously telling a child to put a book down will only make them want to pick it up more. And to give away the vague fate of these characters from the start—well, it’s the reason we were all so enchanted with the first line of The Secret History, is it not?

And then of course there is the question of the “I.” (Not to be confused with the question of the villainous Count Olaf’s eye, which, now that I’m thinking about it, is also very meta.) Who is Lemony Snicket? And what kind of a name is that, anyway? Why does he know so much about the children?

As the series unravels, it becomes clear that the author is very much wrapped into the drama of their lives. A key clue to his involvement can be found in the dismal dedication pages. Each book is dedicated to a woman named Beatrice. A few of my favorites:

Spoiler alert: the person who was once Beatrice does become a character in the story. As a kid, my mind was blown yet again—to think that the dedication page was not merely to the author’s Mom and Dad but that it could indeed be a vital part of the mystery! A Series of Unfortunate Events cast its own kind of magic, a word which here means to expand a young reader’s notion of what a story could be.