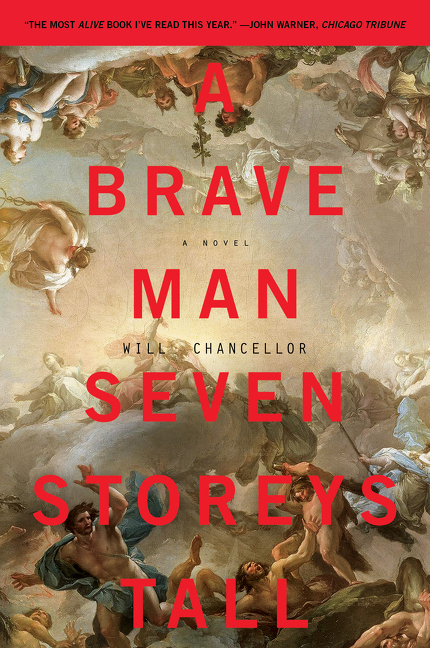 The following is from Will Chancellor’s debut novel A Brave Man Seven Storeys Tall. Chancellor grew up in Hawaii and Texas. He lives in New York.

The Argo, his first remote-controlled boat, buzzed into the concavity of a kickboard, bumping it through the Mission diving well, nudging it under the shadows of concrete slabs, five, seven, ten meters high, while divers waited in the bright sun, wicking their arms with aqua shammies, yoking their necks, and stretching on the platforms above until the white-haired boy piloted boat and board away.

And Owen, eyes full of chemicals, explaining on the drive home that he needed two boats to pull the kickboard through the aerated diving well, the roiling deep he and his father called Charybdis. He thought that if the boats could make it across that cauldron without sinking, they could surely cross the entire Pacific and make it to her island.

The second RC boat, the Mentor, had been for his first report card, not the swim meet. No. It was for the swim meet. Already bored with the six-and-under thrash across the deep end, Owen begged the coach to let him swim up an age division. He won the race, a full lap, by body lengths.

A week later Owen coupled both boats to his boogie board and steered for the white water of the diving well, water sparging to cushion thirty-foot falls, compressors birthing cloudheads that plumed from the bottom of the pool and misted into the thin blue sky.

Owen dug up an antique ring buoy from the supply closet and set it on his foam board. Then he rolled out a medicine ball that weighed about as much as he did and balanced it in the ring. By now, Owen’s machinations were far more interesting than the review Burr had brought to the pool.

The divers shut off the bubbler to practice entries on smoother water. Jet spray riffled the surface, breaking the reflection so they could spot the water precisely and enter with a rip. As the divers held chrome rails and dialed in tension with their feet on large white cogs, Owen sat on the padded lip of the pool, running more engine tests and breaking the quiet rhythm of their approach.

Bound— bzzz—rebound, then the warble and clatter of lumber tossed from the bed of a truck.

Charybdis returned. It was the women’s turn to practice new dives. Early in the season, when they were still setting their programs, they kept the stakes low by bubble-wrapping their misses with the upwelling air. Owen focused on the turbulence. He sat behind a veil of thunder and burbling, like sitting in the cave behind a waterfall.

The senior in Burr’s Homer seminar stopped mid-stair to talk with her coach. High-cut suit and hair glinting like a swirled gallon of gold-flecked paint. She noticed Owen’s fascination with the boats, how he smoothed the cordage and pulled as tight as he could. She clapped a few times and yelled down, “Let’s go, Owen!” whooping until he blushed.

Leash woven between the catamaran hulls, Owen set the board and boats in the pool. He stacked the two remotes back to back in his hands, turning the bottom joystick in the opposite direction from the top. At first, he was able to pull everything—kickboard, buoy, and medicine ball. But once the boats hit the blister’s edge, the rig pitched, sputtered, and drowned.

The team groaned with Burr. But Owen was undaunted.

He spent the next hour yoking the boats like plow oxen, then linking them to the board. But it did nothing. Side by side they stalled. Burr tried to help. Owen glared.

Owen, a four-foot Ajax. That was the moment Burr understood heroic stubbornness, the Sophoclean refusal to relent, as something real rather than rhetorical, something Owen had inherited from his mother’s side of the family.

Still. Owen never managed to drag the medicine ball more than a few feet. He sat on a towel in the passenger seat, totally shattered that his plan had failed. Burr tried to bring him back through bribery.

— You already have the Argo and the Mentor.

— You mean an RC yacht? Those don’t come cheap.

— It would be a present from you and Mom.

Before the afternoon was up, Owen was unboxing the ship, christened Zebulon, and Burr was left to wonder why two pounds of molded plastic needed eight D-cell batteries in its hull.

The night of Owen’s sixth birthday, they were reading a condensed edition of the Odyssey.

The picture on his nightstand was her new-discovery smile.

— Beyond the setting sun.

The phrase was imprecise, but it sounded fatherly— a pipesmoking answer, his best Gregory Peck.

— The sun sets in different places, though. That’s why we have time zones.

— No. It’s always in the west. And your mother is waiting for us beyond the west.

Burr let the words linger and hoped they’d gather weight in the silence.

They were Division III, but Mission University’s diving team took their practices seriously and quickly grew tired of their unofficial mascot zipping his boat over aerated water while they summoned enough confidence to turn a handstand into a back double. Owen’s first boats, the smaller boats, were cute peripheral distractions that cut the tension of divers pushing the limits of their abilities. Zebulon, however, was louder than the bubbler and made it to the center of the plume, right under the ten- meter platform.

After a freshman landed on Owen’s kickboard and sprained her wrist, the head coach asked father and son to take their afternoons to the beach.

First Pfeiffer Beach, then Sand Dollar Beach, then the coves of Point Lobos, but there were never any other kids. The drive was the most enjoyable part of their beach trips, so they soon ventured farther afield to Zuma Beach and Point Dume. Burr only owned one pair of shorts, orange- sherbet corduroy, and wore them on their monthly outings to Zuma. Legs strong and tan, not yet varicosed and dead-fish blue. He sat on the southern outcrop in the shadow of rock climbers, correcting papers while Owen swam past the basking crowd. He was reviewing a dissertation on Nonnos the day Owen’s rude engine cut the chatters.

While Burr edited from the rocks, Owen coiled the rubber leash around Zebulon’s twin hulls, coupling boogie board and battery- devouring boat with a Velcro wrist bracelet.

Owen of outlier height, six years old, white-blond hair he certainly didn’t inherit from his father, behind a kickboard and toy boat, scissor-kicking his mom’s old swim fins due west. Beyond where the sun sets. To Caroline.

How many minutes wasted from when Burr first looked up and thought Owen was swimming out too far until even the thought of action arose? Yes, I should definitely do something. I should do something before things get out of hand. How much idle contemplation as the word riptide became real. Finally, Help? Then choking out, help! Finding knees strong enough to stand and stumble for the water. Now yelling, Help!

Burr wasn’t the first, not even the fifth, to respond. Those minutes of failing might still be won back. But the sting of that engine, a hornet fighting the wind that blows it out to sea, would always remain. On most days the wasping stayed in the background, but on some days the wasp dove straight for Burr’s ear and he could hardly look at his son. Hard to bear, and harder to be rid of.

Wall of memory. Wave rising on the skin of the sea; misting away as it gathers and towers down; surging up- shore until it cuffs your waiting wrists with foam. Water slips through scooped fingers, no matter how tight you bowl them; first it’s droplets, then it’s driplets, then only whorls of brine in your fingertips and salt chains in the lines of your palm. When attention returns, saturating a memory that was finally dry and salting away, what then?

Swim for that floating remote control while your son drifts out to sea, because this gift was a quarter of your paycheck and who knows if you can replace that joystick without buying a whole new boat. Drift down the beach, showing no more concern than the rest of the Sunday crowd, biting your lip rather than answering anyone’s question: Where are the boy’s parents? If you weren’t holding that neon- orange remote control, no one would be staring. Drop it. Pick it up. Yell to your bobbing son with the crowd

They have it under control.

Then, get ready. This is the best part. Cave to the underemployed twenty- something sirs on the skiff. Wrench your hands in supplication even before they return your son to the shore. Volunteer your failings as a father, a single father. Nod and apologize to someone no older than one of your students as they hand you Caroline’s old fins.

But Owen came back smiling. Boat and board in one hand, high fives for all the lifeguards. He marched through ovation, a son returned.

But not returned by you.

He didn’t want to read the Odyssey that night. He grabbed an illustrated Iliad and announced that he was no longer a kid. From now on he would read by himself.

It took Burr a week to realize that reading had been the last thing they had left.

From A BRAVE MAN SEVEN STOREYS TALL. Used with permission of HarperCollins. Copyright © 2014 by Will Chancellor.

"Call Me Ishmael": At the Nantucket Book Festival 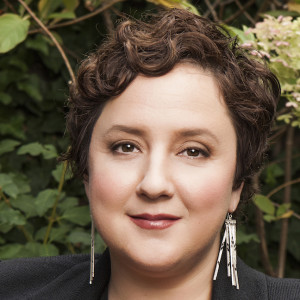 Writing Sex, Watching TV, Hangin' with Edith Wharton Julia Fierro is the author of the novel Cutting Teeth, out July 7th in paperback. A graduate of the Iowa Writer’s Workshop,...
© LitHub
Back to top