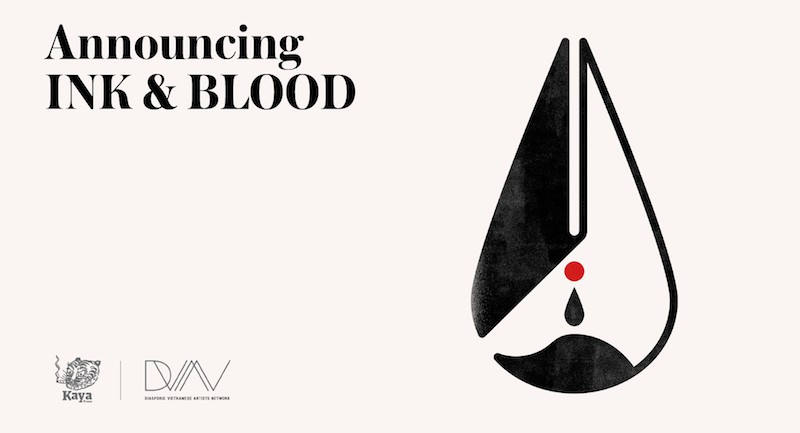 A brand new imprint will focus on publishing diasporic Vietnamese literature in English.

Today marks the announcement of Ink & Blood, a new joint imprint from Kaya Press and the Diasporic Vietnamese Artist Network (DVAN), focused on the publication of diasporic Vietnamese literature in English. The first book to be translated in the Ink & Blood series will be Line Papin’s Les Os de Filles, to be released spring 2022.

Kaya Press and DVAN are a wise collaborative match: Kaya Press, led by publisher Sunyoung Lee, has been publishing Asian Pacific American and Asian diasporic literature for twenty-six years; DVAN was founded by Pulitzer-winning writer Viet Thanh Nguyen and writer and San Francisco State University professor Isabelle Thuy Pelaud to celebrate and foster Vietnamese literary voices. Said Nguyen, “Vietnamese diasporic literature is flourishing globally, and being published in a diversity of languages”—yet it can’t be accessed by English readers. “This is why translating into English becomes important, and that’s the work that this imprint does.”

According to Pelaud, the name “Ink & Blood” comes from the Vietnamese literary group Nguyen and Pelaud participated in as graduate students, where they met. Said Pelaud, “The name Ink & Blood was decided on as one that evoked the act of writing intertwined by a history marked by a war whose consequences most of us were all too familiar with . . . [the name] stands as a gentle poetic embrace of who we were and came from.”

Said Kaya Press publisher Sunyoung Lee, “Ink & Blood is the realization of a long-held desire to share Kaya’s publishing experience with other editors and organizations by helping them to create their own imprints.”

A virtual conversation with Nguyen and Papin in celebration of Ink & Blood’s launch will be held on June 11th at 4:30 PST on Facebook Live.