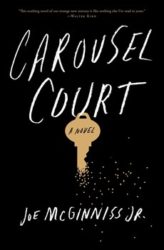 The following is from Joe McGinniss, Jr.’s novel, Carousel Court. McGinniss Jr. is the author of Carousel Court and The Delivery Man. He lives in Washington, DC, with his family.

Phoebe can barely hear the music coming from next door over the incessant chorus of cicadas as she walks around the house with Jackson held to her chest, turning on all the lights. Nick left for work an hour ago, his third night this week. The last two words from him as she closed and locked the door behind him and set the ADT were “Lights on.”

She carries Jackson and his clean laundry upstairs to his room. A CD of international children’s songs plays from his Bose box. Jackson fills a Tonka truck with Matchbox cars while Phoebe hums along to his songs. She folds his size-2T shirts and shorts and places them neatly in his blue three-drawer dresser. The blinds are closed and the ceiling fan turns slowly as she arranges his books neatly on the shelf. She straightens a framed illustration from Where the Wild Things Are that hangs over his crib. She turns on the light and dims it. The room is bathed in orange light and peaceful as she sits on the plush beige carpeting with Jackson. Downstairs, the refrigerator hums, churns: a fresh batch of ice cubes. The LG stainless steel behemoth is restocked with organic raspberries, blueberries, kiwi, mangoes, and strawberries. Thick slices of bruschetta brushed with olive oil. She’ll eat both, one side rubbed with a cut garlic clove while it’s still hot, the way JW showed her once when he took her to a long lunch three months after she was hired at twenty-four, a perk and a leg up that she surely hadn’t earned yet.

All good? comes the text from Nick.

You should see this place—insane

She doesn’t respond. She has nothing to say about whatever he encounters on the other side of the door, all these rotting five-bedroom corpses and their Bermuda grass, yellow from neglect.

Before Nick left the house, he had her by the jaw. Something he’s done since their first weeks together, when he held it in bed, perched over her. “There’s something about you,” he’d say. It had a calming effect on her until recently, because now they’re thirty-two with a son and debt and tumbling down the face of something they never anticipated and the gesture sends all the wrong signals, draws attention to his limitations. Like a grandfather doing the same lame magic trick for the grandchild, who is a teenager now and bored, because that’s all he’s got. Tonight, when Nick was lacing up his boots, giving her instructions, she knew he was feeling guilty about leaving them alone again.

“Kostya and Marina are home.” The neighbors, who might be considered friends, were also in their early thirties, with two sons and a daughter, all somehow named after pickup trucks, Titan, Tundra, and she always forgot the third. “Call them, obviously . . .” Nick trailed off. “If anything happens.” His back to her, he sat on the stairs in the clean marble foyer. His voice echoed when he called out: “It’s Loma Linda. Maybe an hour from here.”

But Phoebe didn’t hear Nick because Jackson was awake again and wailing. He hadn’t slept through the night all summer, since they arrived in June. He knew something Nick and Phoebe only suspected. His fitfulness was an alarm they’d heed if they could. Phoebe was at the top of the double-ascending Couture by Sutton buttercream-carpeted spiral staircase. She was headed to their son’s powder-blue bedroom with its crown molding and accents of textured glow-in-the-dark galaxies of stars and moons. She turned and studied Nick, who had climbed back up the stairs, looking shorter than his six-foot frame when set against the sixteen-foot ceilings.

“You feel good,” he said as he gently massaged one of her breasts even though she held their son between them. “Really fucking good.”

She closed her eyes and rested her chin on his shoulder and exhaled. “Tired,” she said.

“When do you leave in the morning?”

“We’ll miss each other.”

Dirty dishes top off the kitchen sink, wet laundry clings to the inside walls of the washer, musty from neglect, forgotten last night or the night before. The landline never rings. They turned if off because all the calls are from lenders or collections and there’s no point in answering. The days are tough and grinding, long needles scraping bone.

It’s just past one a.m. In the upstairs bathroom, Phoebe swallows her last five milligrams of Klonopin because even curled up next to Jackson’s crib under her old comforter with his night-lights and hushed breathing, she couldn’t sleep. The pillbox she keeps in the Explorer (they drove to North Hollywood to pick it up the day before, a new battery installed) is empty. So, too, is the bottle in the bathroom vanity.

Did you take my klonopin? That’s the text she sends Nick.

She studies herself in their sweeping vintage Astoria pivot mirror, finds a single long silver hair, and pulls it from her scalp. Nick’s right: She’s too thin. And the thinner she gets, the older she looks. She runs her fingers lightly along her collarbone, then smiles weakly at herself, full dry lips and almond-shaped eyes and eyebrows that Nick traces with his thumb when they’re getting along.

The vibration is her iPhone.

No. You finished them. You just lost track. You’re not paying attention.

While she tries to think of a response, he writes:

She possesses an ability now, since the move, if not months before, to tune him out. Nick playing the role of concerned, engaged husband, her partner, looking out for her well-being: Watch yourself, careful, keep an eye on this because these are serious drugs. Want another reason why? Run your finger along the raised pink scar on Jackson’s scalp.

What Nick doesn’t know, what he can’t possibly grasp, is the interaction with the second glass of wine or the Maker’s Mark she sneaks in the afternoons when she finds herself home, skipping appointments while he works, wandering their bloated new-construction house, considering picking up Jackson’s toys, then deciding that their presence, scattered across the plush carpet and glass coffee table, gives the place warmth. She lazily undresses, runs a bath, places the bottle of Maker’s Mark on the cool tile floor.

And tonight, even with the low dosage, she has enough in her system to effectively complement the Maker’s Mark. She wipes condensation from the face of her iPhone, taps out another message to Nick after sliding into hot water.

Do you know how comfortable I am right now, Nick? This very instant?

I’m not trying to hide it.

As evidenced by the empty little MM bottles in the recycling bin.

Nick is also right when he prods her about work. She is slipping. The allergy and anxiety products she’s been selling for GSK are the same she sold for four years back east. Now she follows the GPS directions to medical office campuses and hospitals from Santa Ana to North Hollywood. She’s been back at it since they arrived, makes only some of her appointments, rarely tends to her cold-call list, occasionally dropping in to the doctor’s offices with her sample case and sales pitch, flat and without conviction. She makes the appearance, reads the script she’s memorized, leaves the office before the physician’s second glance at her legs. She’s doing enough to stay employed, barely, the handsome young physician she courted recently a unique exception.

What she also does is linger in the produce section at Whole Foods, watching brown men in black aprons thoughtfully arrange and tend to red, gold, and deep-green vegetables. Whole Foods trips trigger a uniquely intoxicating blend of adrenaline rush and sedation. Or maybe it’s the Klonopin. Or both. Since the move here, she’s learned that the fine mist showering the mustard greens, arugula, and summer squash is on a forty-second cycle—ten seconds on, thirty seconds off. Lentils, red beans, omega-3–enriched milk, brown rice, and kale: It is all there, aisles of superfoods, a road map to cultivate the healthiest child on the planet. Jackson deserves nothing less. On that much, she and Nick agree.

She’ll come home with too many organic red bell peppers, asparagus shoots. They can’t afford the food, don’t even always cook it. She’ll throw out the same bunches of kale and broccoli, never getting around to steaming them. Her attempt last Sunday at fennel with leeks, roasted red peppers, marinated feta, and Greek olives was a disaster, stuffed down the garbage disposal before Nick got home.

The down comforter is from the master bedroom, the same comforter they’ve had since they moved in together eight years ago. The faded stains are spilled wine and soy sauce. She clings to it like a child. She curls up with an oversize blue pillow next to Jackson’s crib and stares at her iPhone, listening to her son’s fitful breathing. She sends a message to Marina, apologizing for blowing off shopping the other day, and asks if she’s going to the playground this weekend and if they’re still on for

The image is of Marina: pouty, too tan, bleached blond, with her wide forehead and bright red lipstick and pale blue eyes. She wears a too-low-cut camisole, her swollen breasts spilling out.
Hot, Phoebe lies.

Nick’s right about her losing weight. But Nick’s wrong, too. She does not obsess about what didn’t happen. Of course, she considers where they were supposed to be instead of Carousel Court. After Jackson’s asleep and Nick is working or knocked out upstairs or on the patio throwing rocks at shadows on the dry hillside behind the house or walking the block playing vigilante, she spends idle hours Googling Redondo and Hermosa Beach and child-friendly restaurants and playgrounds within walking distance of where they’d planned to live.

It wasn’t a breakdown, but it was close. Her exhaustion sent her into the back of the idling UPS truck, then spinning helplessly into oncoming cross-traffic, and on that January night thirty minutes south of Medford, Massachusetts, she nearly killed Jackson. But it wasn’t the pastel pink, blue, and yellow pills, it was fatigue. That much she knew. And fucking Nick. It was all on her, Phoebe felt, to run this thing. To keep them going. If they were going to ascend, plateau at a level she could live with, it was all on her. Phoebe knew and resented it. Nick’s grand solution: Move them to a beachfront rental on the West Coast, secure an investment property to upgrade, flip for enough profit to secure their future. All the while giving Phoebe what she desperately needed, if not deserved: a summer off to spend with her son. An undisturbed period of rest and regeneration. Time and space to figure out what she wanted next for herself. Nick, though, can’t deliver on his promise once again. His overreach astounds her. The realization that he’s simply not up to this is too much to contemplate alone on a windy night.

Listen to the excerpt here: 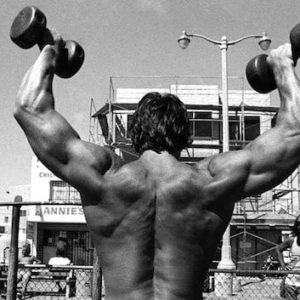 The Most Literary Book Ever Written About Bodybuilding After an 1879 ride on the Camden ferry—“What exhilaration, change, people, business, by day. What soothing, silent, wondrous...
© LitHub
Back to top