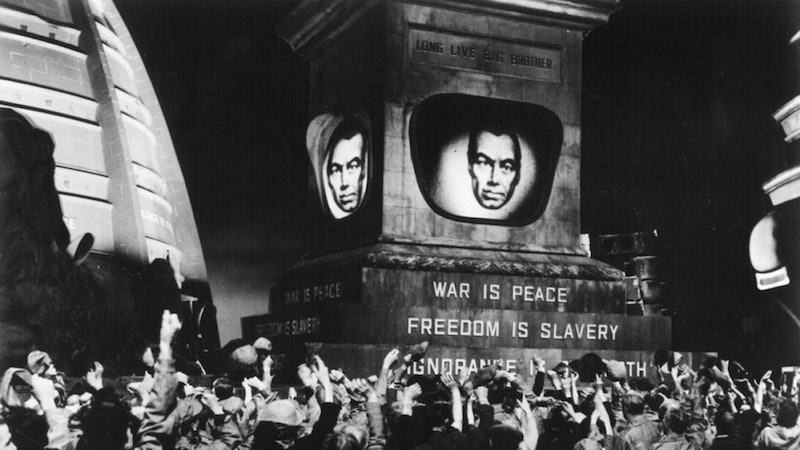 On January 21, 2017, the first full day in office of the new American president, Donald J. Trump—and the 67th anniversary of George Orwell’s death—the writer Orwell’s grim novel of a dystopian future, 1984, began yet another climb up the bestseller lists. A series of public statements by senior officials in the new administration had catapulted it to No. 2 within hours of Trump’s swearing in. White House press secretary Sean Spicer heatedly insisted that the inauguration had been the best attended ever—“period”—regardless of what the photo and statistical evidence might indicate. Two days later, on the Sunday morning television show Meet the Press, Kellyanne Conway, a close advisor to the president, defended Spicer by “explaining” that his false claims were merely “alternative facts.” Alarms rang out across the globe that Winston Smith could not have come up with a better line in his cubicle at the Ministry of Truth, where all fabrications are merely what could be termed “alternative facts.”

And by the morning of January 25, 1984 stood at No. 1—for an amazing fourth time since its publication 70 years ago this week on June 8, 1949. A widely syndicated cartoon two days later captured that moment, charging that Trump was keeping tabs on the New York Times (or some other purveyor of allegedly left-slanted “fake news”). The cartoon mocked Trump as an “Orwellian” leader who is keeping an all-seeing eye on any “enemy of the people.”

In an interview with CNN, I dubbed Conway, whose inadvertent masterstroke of euphemistic Newspeak suddenly made her the darling of the publishing industry, the “Oprah of the Oval Office,” a wonder woman who could immediately turn serious books—above all, dystopian classics—into bestsellers. (Within weeks, the rising tide of 1984’s sales also lifted Margaret Atwood’s The Handmaid’s Tale to No. 1, with classics such as Aldous Huxley’s Brave New World and Orwell’s own Animal Farm in hot pursuit.) Conway’s notorious phrase immediately went viral and was translated into numerous languages.

Fast-forward 18 months. In August 2018, another choice example of Newspeak—this time by the president’s lead lawyer, Rudy Giuliani—drew another round of countless references to Orwell and may even have “trumped” Conway’s howler. “Truth isn’t truth,” said Giuliani, replying to an interviewer’s comment that the president should just “tell the truth” if he met with the team of Robert Muller, the special counsel at work on investigating the president and other Trump administration officials about their connections to Russia and its alleged interference in the 2016 presidential campaign. Giuliani made the statement during a Sunday morning Meet the Press television appearance (August 18) in the course of explaining that he was advising his client not to testify before the special counsel since the president might make a statement that could lead to a perjury charge.

The outcry from both the media and political liberals about Giuliani’s “Orwellian” line was loud and immediate. Analogies were drawn between the disappearance of “objective truth” in Orwell’s Oceania and life in “Trumpland.” Headlines such as New York Magazine’s “Giuliani Goes Full Orwell” were also common—here again conflating and confusing Orwell with his “Orwellian” doppelgänger, “Orwell.”

As much as the political pundits enjoyed the hilarity of Giuliani’s blooper, book publishers took less delight in it, for unlike the case of Conway’s blunder, Giuliani’s remark had no discernible effect on sales of any books, including 1984.

The association of Donald Trump with Orwell reflects how a man of letters, the writer George Orwell, is transformed into a titanic totem, the icon “Orwell.”

Obviously, the sales of 1984 during the past two years have risen in response to Trump’s audacious attempts to manipulate facts throughout his long presidential campaign and since his November 2016 election victory. It is interesting that the connection between “alternative facts” and Orwell’s dystopia was first made by a reporter who dubbed it “a George Orwell phrase”—as if Orwell himself might have been a Winston Smith who crafted his lies in clever-sounding language or even a version of Donald Trump.

This confusion about and conflation of the author George Orwell with such “Orwellian” locutions is a common occurrence. Is “Orwellian” language the limpid, direct style of the author? Or is it the diabolical doublespeak of Big Brother? Certainly in the public mind—and in common usage—that proper adjective mainly signifies the latter. And this sinister meaning of the man’s name in adjectival form reflects the rise of what can be called the “Orwell legend,” that is, the transformation of an individual into an icon. All this points to the difference between Orwell and “Orwell,” with the latter representing the towering totem invoked by ideologically motivated (or ill-informed and careless) observers to bolster whatever arguments they seek to advance.

The association of Donald Trump with Orwell reflects how a man of letters, the writer George Orwell, is transformed into a titanic totem, the icon “Orwell.” That distinction was overlooked during the media’s feeding frenzy about “alternative facts” eclipsed and elided the writer Orwell into the bête noir “Orwell.”

Alas, the tendency is widespread, certainly not limited to Trump’s circle.  And sometimes the “confusions” are not at all accidental, but rather direct, frontal attacks on Trump and Orwell together.

Fast forward again to 2019. Just ten weeks ago on March 22, in a comprehensive 2,000-word critique (“The Real Parallels Between Donald Trump and George Orwell”), a Trump critic writing online for CounterPunch explicitly cast Orwell as his “Orwellian” creation, Big Brother. Leading off with an epigraph from Noam Chomsky charging Orwell (who had served in

Burma as an Empire police official in his early twenties) as “for almost 20 years [thereafter] the policeman of the Left,” the columnist proceeded: “One could argue that George Orwell  was one of those leftists who criticized the Deep State for the right reasons.  However, when we look closely . . . we see that Orwell had many prejudices he hid behind closed doors. . . . George Orwell and Donald Trump literally say the same thing: it is all fake news.”

The author concludes: “George Orwell is like Donald Trump in some ways. He has no loyalty to anyone but himself. He despises government, especially when it is in the name of socialism. He is racist, homophobic, and anti-Semitic. He is driven by his egotistical sexual urges more  than any ideology. Bad writers have only one story to tell, and it’s their own. 1984 was such a story. George Orwell snitched out his comrades to a member of the secret police he was in love with. . . . Donald Trump, who has no friends, and George Orwell, the snitch who proved that he had no friends he cared for, have a lot in common.”

Yet is Donald Trump the only president to be tarred with the “Orwellian” brush?  Not at all.

The presumed kinship between the man and writer (Orwell) and the bogeyman behemoth (“Orwell”), which serves to blur or completely efface any distinction between them, bears comparison with the perplexing mix-up between Dr. Victor Frankenstein and his mutant monstrosity. Among those who have never read Mary Shelley’s Frankenstein, “Frankenstein” is the monster—not unlike the case with Orwell and Big Brother (or “Orwellian” and “Ingsoc-ian,” to coin a jarring Newspeak-ism!) It warrants emphasis, however, that Dr. Frankenstein’s Promethean creation—which he variously refers to as “creature,” “being,” “thing,” “spectre,” “wretch,” “fiend,” “ogre,” and “demon”—remains nameless in the novel. In a passing remark, the monster does address himself to Dr. Frankenstein as “the Adam of your labors,” imputing godlike power to his creator.

Mudslinging about fake news, scandals galore, political gridlock, and internecine inside-the-Beltway warfare notwithstanding, Trump has proven a master at dominating the airwaves. It is as if he based his entire campaign strategy and governing outlook on the famous party slogan in 1984: “Who controls the present, controls the past. Who controls the past, controls the future.” The president has understood that the takeaway is this: whoever controls the present controls both the past and the future. Such a tremendous power to command headlines and dictate the public conversation of the moment—exemplified by his direct connection to the wider public via his ever-active Twitter account—is a terrifying demonstration of what Orwell termed the “mutability of the past.”

More than likely, if he were alive today, George Orwell would be a target, not an ally, of the president. In that event, while the American print and broadcast media have preoccupied themselves since 2016 with the question, “What would Orwell say about Donald J. Trump?” it is therefore worth asking, “What might Donald Trump say about a crotchety Orwell upbraiding Trump for one of his diatribes about ‘fake news’ or ‘crooked Hillary’ or ‘shithole countries’?” One can imagine a Trump tweet against him: “A total loser! Not a clue! Park yourself in Room 101 and open the rat cage.”

Yet is Donald Trump the only president to be tarred with the “Orwellian” brush?  Not at all. True, since the recent release of and surrounding controversy over Robert Mueller’s investigative report of the president, references to Trump’s “Orwellian” administration have escalated into demands for impeachment. It is worth noting, however, that the calls to “impeach Big Brother” did not begin with Trump and the aftermath of the 2018 midterm elections in the U.S., which witnessed control of the House of Representatives shift to the Democrats and the start of congressional investigations to impeach him. My research has turned up numerous cartoons and news articles satirizing “Big Brother” Ronald Reagan, who also confronted scattered calls for impeachment from his political opponents.  Attempts to impeach Reagan never gained strong congressional support. In 1999, however, the case turned out quite differently for Democratic president Bill Clinton, who was impeached by a Republican-led House in December 1998, though not convicted by the U.S. Senate two months later. Especially during the occupation of Iraq, George W. Bush was satirized as “Orwell Man” and his successor was labeled “Big Brother Obama,” with protesters chanting mockingly, “Yes We Scan” (a derisive pun on his popular 2008 campaign slogan, “Yes We Can”).

Admittedly, both the stagecraft and substance of the Trump administration’s foreign policy are quite different from those of Barack Obama and even George W. Bush. If anything, however, civil liberties seem under siege to an even greater extent today. And whatever one writes about the topic is soon hopelessly dated. Exposés uncovering the skullduggery of Cambridge Analytica, the misuses of Facebook data, and the Soviet and Chinese governments’ officially sponsored hacking programs reveal vertiginous quantum leaps in techno-tyranny on an almost weekly basis. Given the current state of affairs, in which incursions into and even abrogations of our personal freedoms are so frequent as to render them a casual, matter-of-fact norm of contemporary life, I believe that Orwell would voice anew his anxieties of yesteryear. Whether applied to state torture or techno-trespass, his novel’s cautionary warnings are unfortunately evergreen—or ever ebony. 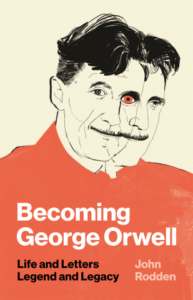 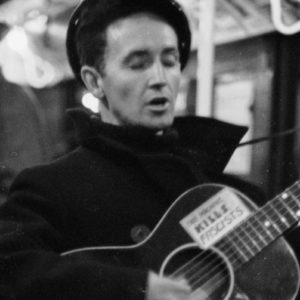 Indelible performances like Bob Dylan’s at the Newport Folk Festival in 1965 and Jimi Hendrix’s at the close of the Woodstock...
© LitHub
Back to top
Loading Comments...