In recent weeks, I’ve found myself being a little too moody. Melancholic, you might say. I’ve found myself agonizing over the state of the world, and meditating a little too long on the tragic meaningless of life. Getting a bit obsessed, maybe. A bit dark. So for absolutely no reason at all, I have decided to rank all of the Hamlets in film, television, and elsewhere. Yes, this is the kind of thing that makes me feel better.

Here are the rules (though this be madness, yet there is method in’t):

1. I have included both full and partial Hamlets, though if not a full Hamlet, the character must be actually portraying the Prince in some way—in rare cases, a soliloquy might be enough (basically only if you’re Withnail), but a tossed-off quotation or lofted skull (sorry, Chewy) will not.

2. I’ve also had to exclude legendary (and er, less-legendary) stage performances that I couldn’t at least watch in part through the magic of the internet—I wish I had the chance to experience Ruth Negga’s Hamlet, or David Warner’s (in the scarf!), or Edwin Booth’s, for that matter. But since I can’t, they’re not exactly rankable. This also goes for John Barrymore, John Gielgud, the more recent Simon Russell Beale, etc. Trust me, I know they exist—but any list that includes them must veer irretrievably into the hypothetical.

3. I’ve made an effort to separate the Hamlets from the Hamlets, but there’s some inevitable conflation.

4. It’s obviously impossible to compare serious Hamlets with comic ones, or partial Hamlets with full ones, or old Hamlets with new ones, but I’ve done it anyway. Consider my rankings based on a combination of skill (at achieving whatever style of Hamlet is called for) and essential enjoyability.

5. Exclusion from this list should not necessarily be taken to mean a lack of ranking, and there are definitely more Hamlets in heaven and earth than are dreamt of in this philosophy, but I was as exhaustive as I could be, and listen, you gotta stop somewhere. If Hamlet had known that, maybe he wouldn’t have gotten into all that trouble.

Finally, as always: my list, my opinions. I am not actually one of those people who thinks there is a “definitive” Hamlet—I think everyone has, or should have, their own personal ranking, based on their tastes and experience. This is mine; may it inspire you to further define your own (or just laugh at your desk at the goofy ones—whatever works for you). After all: to thine own self, etc.

40. Jimmy Gourd as Omelet, in VeggieTales (2001)
Hamlet retold as a morality play starring vegetables in which the moral is: God likes it when you share. I hate everything about this except the Battleship joke.

39. Mel Gibson as Hamlet, in Sesame Street‘s Monsterpiece Theater (1993)
In his other portrayal of Hamlet, Gibson boils the play down to its essentials: “words, words, words.” Elmo, however, is only interested in “pictures, pictures, pictures.” (Really seems like this person shouldn’t be allowed around impressionable children, but I guess this was before we knew about his raging antisemitism…)

38. Billy Madison as Hamlet, in Billy Madison (1995)
He’s terrible, but at least he’s better than Eric. Anyway, I heard Eric drinks his own pee.

37. George Mackay as Hamlet, in Ophelia (2018)
Woof. I know it’s not fair, because this isn’t his story (for once), but how am I suppose to believe that Daisy Ridley’s Ophelia is going for this moony kid? There’s no edge in this Hamlet, and thus he is not a Hamlet for me.

36. Roosevelt Hobbs as Hamlet, in Renaissance Man (1994)
Yes, the Classic Film in which Danny DeVito teaches Shakespeare to a bunch of resistant, “ineducable” soldiers, including Stacey Dash and Marky Mark (which is why we get this rap). It’s a movie at least partially about Hamlet—which ain’t about a little-bitty pig, in case you were curious—without much in the way of a Hamlet, except for Hobbs, a kid too smart to be there, who pulls him in the table read. Hard to rank, but can’t be excluded. (And does it work? I mean, do they learn their Shakespeare? You bet they do.) 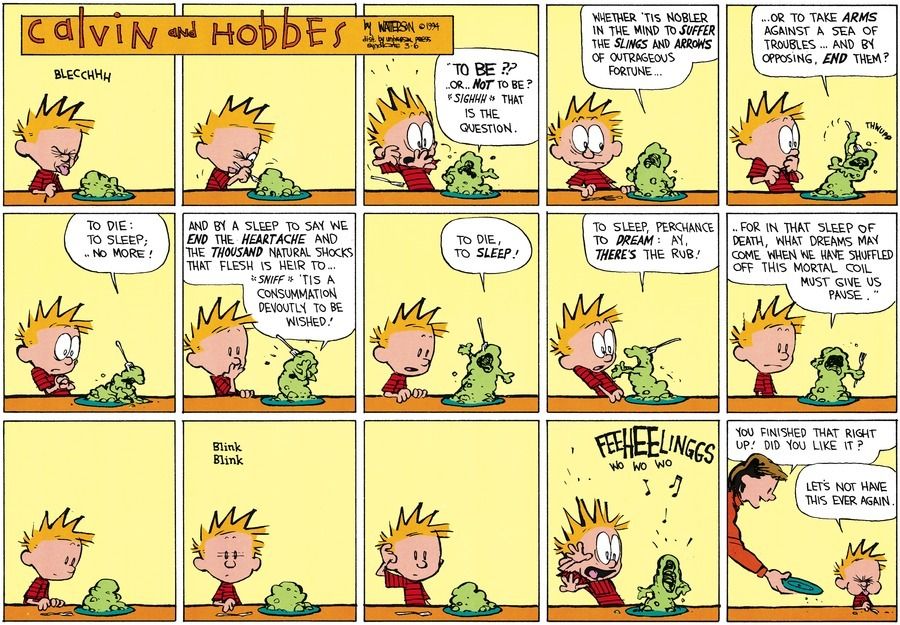 35. Spamlet in Calvin and Hobbes (1994)
An easily ingested Hamlet, but not a very filling one. Quoth Bill Waterson: “This is one of the weirdest strips I drew, and I’m not exactly sure I understand it myself, but it still makes me laugh, so there you are.”

34. Maximilian Schell as Hamlet in Hamlet (1961) in Mystery Science Theater 3000 (1999)
Schell definitely ranks of the best looking Hamlets—but this production, originally for German television, was roundly scorned and forgotten, until it showed up on MST3K. It’s hard to rank Hamlet alone, considering, but he’s . . . not great (and made worse by the fact that this is a dub over the original German)—still, this version gets a little bump from the framing.

32. Jack Benny as Josef Tura as Hamlet, in To Be or Not to Be (1942)
Great film, bad Hamlet. But of course he’s meant to be bad: Tura is a ham Hamlet, if you will. (“What he did to Shakespeare we are doing now to Poland,” says a Nazi, to a disguised Tura no less . . . yikes all around.) FYI that I did delve slightly into the Mel Brooks remake from the 80s, but what I found was not exactly Hamlet (funny, though).

31. Joseph Julian Soria as Octavio as Hamlet in Hamlet 2 (2008)
Oh, Hamlet 2. A movie about a play that’s “so bad it starts to turn good again” which is, itself . . . so bad it starts to turn good again. That said, I’m not unconvinced by Dana’s take: “If Hamlet had had just a little bit of therapy, he could have turned everything around!” So true. Anyway, Octavio’s Hamlet, after going back in time and meeting up with Jesus (of course), delivers his scant lines with aplomb, fights Laertes with budget lightsabers before hugging him, slow-motion runs, and well, saves everyone, forgives his dad, and proposes to Ophelia. It’s not not amazing. 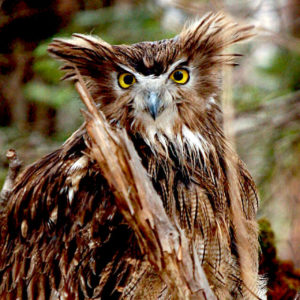 A Long, Surreal Night in Russia's Far East, in Search of the Elusive Fish Owl Dalnegorsk is a city of 40,000 inhabitants tucked between the steep slopes of the Rudnaya River valley, founded as a mining...
© LitHub
Back to top
Loading Comments...