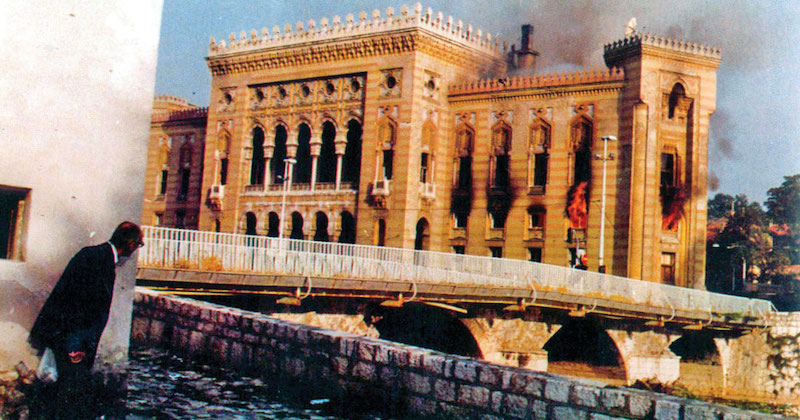 30 years ago tonight, Sarajevo’s National Library was burned to the ground.

30 years ago tonight, in one of the most infamous acts of cultural genocide in living memory, the National and University Library of Bosnia and Herzegovina in Sarajevo was razed to the ground.

In the night between Aug 25 and 26, 1992, the Army of Bosnian Serbs fired direct artillery grenades at the monumental Vijećnica, or Sarajevo City Hall. At the time, National and University Library of Bosnia and Herzegovina was situated in the building. (1/5) pic.twitter.com/RiYhgg1XQR

Located on the bank of the Miljacka river in the city’s old Turkish quarter, the beautiful pseudo-Moorish structure, known to locals as Vijećnica (City Hall), was a beloved symbol of the multiethnic, multicultural capital of Bosnia before the entire building, along with two million of the books it housed, went up in flames.

By August 25th, Sarajevo was suffering through the early days of a devastating four year siege (the longest in the history of modern warfare) by Bosnian Serb forces, one which would ultimately claim the lives of over ten thousand of its inhabitants. Every day, from the hills around the city and the windows of captured apartment blocks within it, shells and sniper fire rained down the trapped Sarajevan people—a people who had, only 8 years previous, joyously hosted the 1984 Winter Olympic Games.

The library itself had no military significance and was deliberately targeted by Bosnian Serb forces (under the command of Radovan Karadzic and General Ratko Mladic, who were later convicted of war crimes at The Hague), who then shot at the firemen as they attempted to extinguish the blaze.

During the attack, despite being under sniper fire, civilians and library staff members tried valiantly to save as many of the irreplaceable books manuscripts—many of which reflected the multicultural life of the region under the Ottoman and Austro-Hungarian empires—as they could.

One courageous young woman, a 32-year-old librarian named Aida Buturovic, was killed in the attempt.

On 25 August 1992, Bosnia’s National & University Library – Vijećnica, was targeted by the #Serb forces. Today we remember AIDA BUTUROVIĆ, a 32-year-old librarian who was killed as she & her colleagues tried to rescue books from the flames.#WeRemember pic.twitter.com/mk861fws8u

In the days that followed the destruction of Vijećnica, in what became in iconic image of cultural and artistic perseverance in the face of ethnonationalist barbarism, Vedran Smailović, the “Cellist of Sarajevo,” came to play music amid the ruins.

Vedran Smailović, who often came to play for free at different funerals during the Sarajevo siege despite the fact that funerals were often targetted by Serb forces, plays the cello in the ruins of the Vijećnica.

The renovated Vijećnica was rebuilt and reopened in July 2014, almost 22 years after it was burned down, and earlier today the building hosted a ceremony to mark the 30th anniversary of that devastating loss.