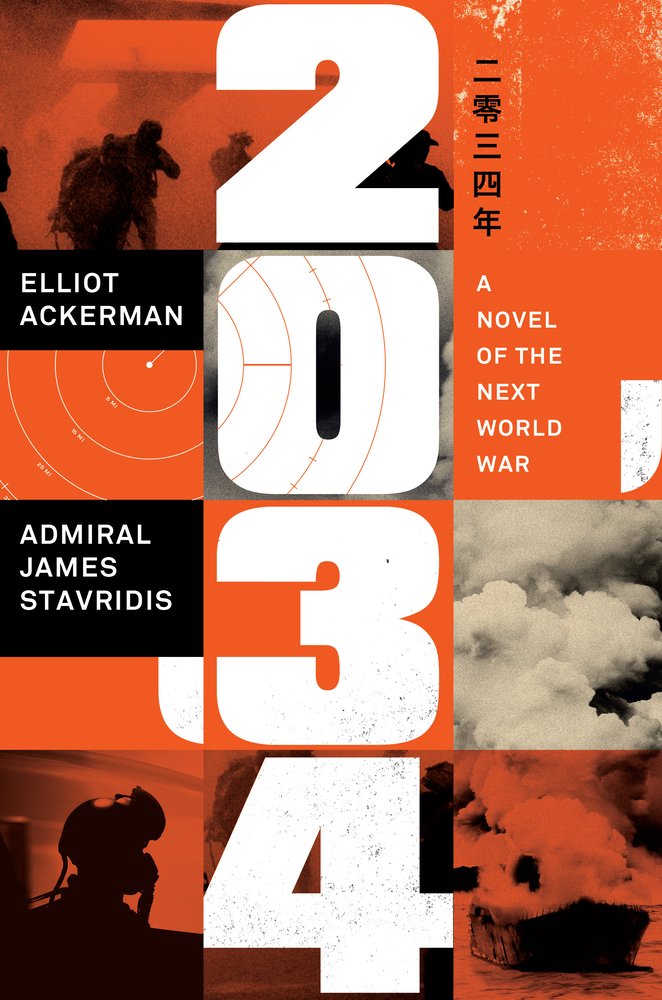 The following is excerpted from Jim Stavridis and Elliot Ackerman's novel 2034, a geopolitical thriller that imagines a naval clash between the US and China in the South China Sea in 2034. Ackerman is the author of several novels, which have been nominated for the National Book Award and the Dayton Literary Peace Prize. Stavridis spent more than thirty years in the US Navy and has published nine previous books.

It surprised her still, even after twenty-four years, the way from horizon to horizon the vast expanse of ocean could in an instant turn completely calm, tuat as a linen pulled across a table. She imagined that is a single needle were dropped from a height, it would slip through all the fathoms of water to the seabed, where, undisturbed by any current, it would rest on its point. How many times over her career had she stood as she did now, on the bridge of a ship, observing this miracle of stillness? A thousand times? Two thousand? On a recent sleepless night, she had studied her logbooks and totaled up all the days she had spent traversing the deep ocean, out of sight of land. It added up to nearly nine years. Her memory darted back and forth across those long years, to her watch-standing days as an ensign on the wood-slatted decks of a minesweeper with its bronchial diesel engines, to her mid-career hiatus in special warfare spent in the brown waters of the world, to this day, with these three sleek Arleigh Burke–class destroyers under her command cutting a south-by-southwest wake at eighteen knots under a relentless and uncaring sun.

Her small flotilla was twelve nautical miles off Mischief Reef in the long-disputed Spratly Islands on a euphemistically titled freedom of navigation patrol. She hated that term. Like so much in military life it was designed to belie the truth of their mission, which was a provocation, plain and simple. These were indisputably international waters, at least according to established conventions of maritime law, but the People’s Republic of China claimed them as territorial seas. Passing through the much-disputed Spratlys with her flotilla was the legal equivalent of driving donuts into your neighbor’s prized front lawn after he moves his fence a little too far onto your property. And the Chinese had been doing that for decades now, moving the fence a little further, a little further, and a little further still, until they would claim the entire South Pacific.

Maybe we should simply call it that, she thought, the hint of a smirk falling across h er carefully curated demeanor. Let’s call it a donut drive instead of a freedom of navigation patrol. At least then my sailors would understand what the hell we’re doing out here.

She glanced behind her, toward the fantail of her flagship, the John Paul Jones. Extending in its wake, arrayed in a line of battle over the flat horizon, were her other two destroyers, the Carl Levin and Chung Hoon. She was the commodore, in charge of these three warships, as well as another four still back in their home port of San Diego. She stood at the pinnacle of her career, and when she stared off in the direction of her other ships, searching for them in the wake of her flagship, she couldn’t help but see herself out there, as clearly as if she were standing on that tabletop of perfectly calm ocean, appearing and disappearing into the shimmer. Herself as she once was: the youthful Ensign Sarah Hunt. And then herself as she was now: the older, wiser Captain Sarah Hunt, commodore of Destroyer Squadron 21—Solomons Onward, their motto since the Second World War; “Rampant Lions,” the name they gave themselves. On the deck plates of her seven ships she was affectionately known as the “Lion Queen.”

She stood for a while, staring pensively into the ship’s wake, finding and losing an image of herself in the water. She’d been given the news from the medical board yesterday, right before she’d pulled in all lines and sailed out of Yokosuka Naval Station. The envelope was tucked in her pocket. The thought of the paper made her left leg ache, right where the bone had set poorly, the ache followed by a predictable lightning bolt of pins and needles that began at the base of her spine. The old injury had finally caught up with her. The medical board had had its say. This would be the Lion Queen’s last voyage. Hunt couldn’t quite believe it.

The light changed suddenly, almost imperceptibly. Hunt observed an oblong shadow passing across the smooth mantle of the sea, whose surface was n ow interrupted by a flicker of wind, forming into a ripple. She glanced above her, to where a thin cloud, the only one in the sky, made its transit. Then the cloud vanished, dissolving into mist, as it failed to make passage beyond the relentless late-winter sun. The water grew perfectly still once again.

Her thoughts were interrupted by the hollow clatter of steps quickly and lightly making their way up the ladder behind her. Hunt checked her watch. The ship’s captain, Commander Jane Morris, was, as usual, running behind schedule.

His father had felt it a bit more than him, like that one time the FLIR on his F/A-18 Hornet had failed and he’d pickle-barreled two GBU-38s “danger close” for a platoon of grunts in Ramadi, using nothing but a handheld GPS and a map. . . .

“Pop,” his grandfather, had felt it more than them both when, for five exhausting days, he’d dropped snake and nape with nothing more than an optical sight on treetop passes during Tet, where he dusted-in so low the flames had blistered the fuselage of his A-4 Skyhawk. . . .

“Pop-Pop,” his great-grandfather, had felt it most of all, patrolling the South Pacific for Japanese Zeros with VMF-214, the famed Black Sheep squadron led by the hard-drinking, harder-fighting five-time Marine Corps ace Major Gregory “Pappy” Boyington. . . .

This elusive it, which had held four generations of Mitchells in its thrall, was the sensation of flying by the seat of your pants, on pure instinct alone. (Back when I flew with Pappy, and we’d be on patrol, it wasn’t all whizbang like you have it now. No targeting computers. No autopilot. It was just your skill, your controls, and your luck. We’d mark our gunsights on the canopy with a grease pencil and off we’d fly. And when you flew with Pappy you learned pretty quick to watch your horizon. You’d watch it close, but you’d also watch Pappy. When he’d toss his cigarette out of the cockpit and slam his canopy shut, you knew he meant business and you were about to tangle with a flight of Zeros.)

The last time Wedge had heard that little speech from his greatgrandfather, he’d been six years old. The sharp-eyed pilot had only the slightest tremor in his voice despite his ninety-plus years. And now, as the clear sun caught light on his canopy, Wedge could hear the words as distinctly as if his great-grandfather were riding along as his backseater. Except the F-35E Lightning he flew only had a single seat.

This was but one of the many gripes Wedge had with the fighter he was piloting so close to Iranian airspace that he was literally dancing his starboard wing along the border. Not that the maneuver was hard. In fact, flying with such precision took no skill at all. The flight plan had been inputted into the F-35’s onboard navigation computer. Wedge didn’t have to do a thing. The plane flew itself. He merely watched the controls, admired the view out his canopy, and listened to the ghost of his great-grandfather taunting him from a nonexistent back seat.

Jammed behind his headrest was an auxiliary battery unit whose hum seemed impossibly loud, even over the F-35’s turbofan engine. This battery, about the size of a shoe box, powered the latest upgrade to the fighter’s suite of stealth technologies. Wedge hadn’t been told much about the addition, only that it was some kind of an electromagnetic disrupter. Before he’d been briefed on his mission, he’d caught two civilian Lockheed contractors tampering with his plane belowdecks and had alerted the sergeant at arms, who himself had no record of any civilians on the manifest of the George H. W. Bush. This had resulted in a call to the ship’s captain, who eventually resolved the confusion. Due to the sensitivity of the technology being installed, the presence of these contractors was itself highly classified. Ultimately, it proved a messy way for Wedge to learn about his mission, but aside from that initial hiccup every other part of the flight plan had proceeded smoothly.

Maybe too smoothly. Which was the problem. Wedge was hopelessly bored. He glanced below, to the Strait of Hormuz, that militarized sliver of turquoise that separated the Arabian Peninsula from Persia. He checked his watch, a Breitling chronometer with built-in compass and altimeter his father had worn during strafing runs over Marjah twenty-five years before. He trusted the watch more than his onboard computer. Both said that he was forty-three seconds out from a six-degree eastward course adjustment that would take him into Iranian airspace. At which point—so long as the little humming box behind his head did its job—he would vanish completely.

It would be a neat trick.

It almost seemed like a prank that he’d been entrusted with such a high-tech mission. His buddies in the squadron had always joked that he should’ve been born in an earlier time. That’s how he’d gotten his call sign, “Wedge”: the world’s first and simplest tool.

Time for his six-degree turn.

He switched off the autopilot. He knew there’d be hell to pay for flying throttle and stick, but he’d deal with that when he got back to the Bush.

He wanted to feel it.

If only for a second. And if only for once in his life.

It would be worth the ass-chewing. And so, with a bunch of noise behind his head, he banked into Iranian airspace.

The Thanksgiving Play by Larissa FastHorse, Read by a Full Cast 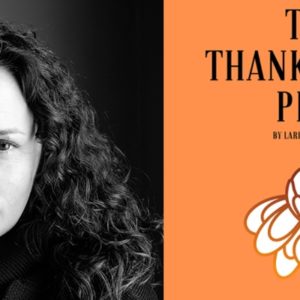 The Thanksgiving Play by Larissa FastHorse, Read by a Full Cast Every Monday through Friday, AudioFile’s editors recommend the best in audiobook listening. We keep our daily episodes...
© LitHub
Back to top