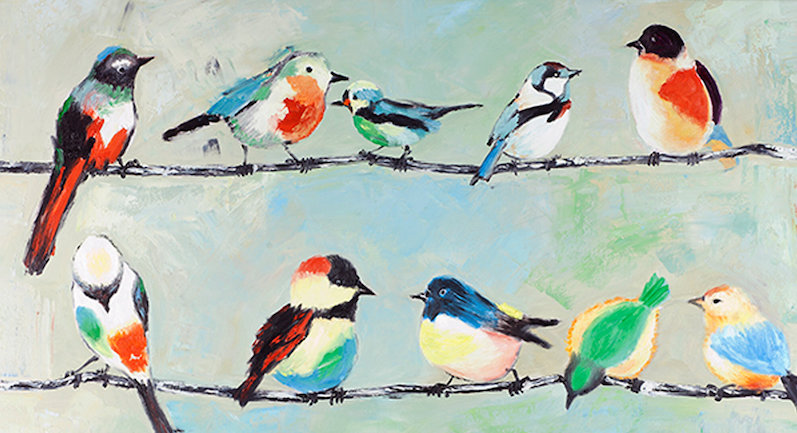 From Thoreau to Whitman to Muir, the Very Best Bird-Related Writing

The following passages are from American Birds: A Literary Companion, edited by Andrew Rubenfeld and Terry Tempest Williams.

In these plains I observed great numbers of the brown Curloos, a small species of curloo or plover of a brown colour about the same size of the common snipe and not unlike it in form … this bird or that which I take to be the male rises into the air about 60 feet and supporting itself in the air with a brisk motion of the wings sings very sweetly, has several shrill soft notes reather of the plaintive order which it frequently repeats and varies, after remaining stationary about a minute in his aireal station he descends obliquely occasionally pausing and commnying his decension with a note something like twit twit twit; on the ground he is silent.

“On this little bird nature has profusely lavished her most splendid colours; the most perfect azure, the most beautiful gold, the most dazzling red, are for ever in contrast, and help to embellish the plumes of his majestic head. The richest pallet of the most luxuriant painter, could never invent any thing to be compared to the variegated tints, with which this insect bird is arrayed.” 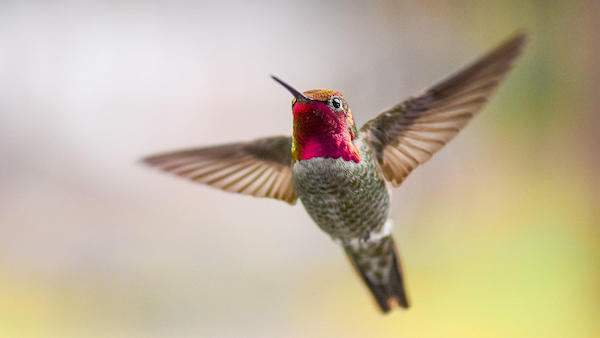 “The flight of [the Ivory-billed Woodpecker] is graceful in the extreme, although seldom prolonged to more than a few hundred yards at a time, unless when it has to cross a large river, which it does in deep undulations, opening its wings at first to their full extent, and nearly closing them to renew the propelling impulse. The transit from one tree to another, even should the distance be as much as a hundred yards, is performed by a single sweep, and the bird appears as if merely swinging itself from the top of the one tree to that of the other, forming an elegantly curbed line. At this moment all the beauty of the plumage is exhibited, and strikes the beholder with pleasure.”

April 26, 1838
“Yesterday P.M. I went to the Cliff with Henry Thoreau. Warm, pleasant, misty weather which the great mountain amphitheatre seemed to drink in with gladness. A crow’s voice filled all the miles of air with sound. A bird’s voice, evn a piping frog enlivens a solitude & makes world enough for us. At night I went out into the dark & saw a glimmering star & heard a frog & Nature seemed to say Well do not these suffice?” 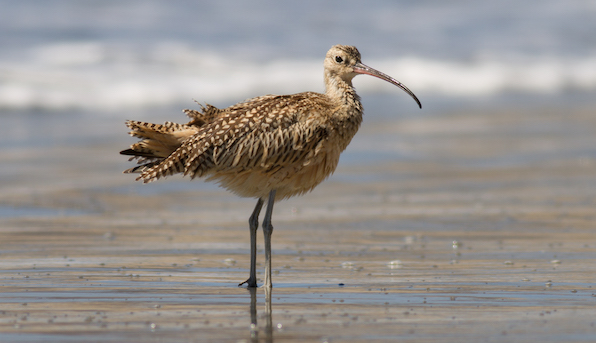 March 10, 1852
“I was reminded, this morning before I rose, of those undescribed ambrosial mornings of summer which I can remember, when a thousand birds were heard gently twittering and ushering in the light, like the argument to a new canto of an epic and heroic poem. The serenity, the infinite promise, of such a morning! The song or twitter of birds drips from the leaves like dew. Then there was something divine and immortal in our life. When I have waked up on my couch in the woods and seen the day dawning, and heard the twittering of the birds.”

“Did you ever chance to hear the midnight flight of birds passing through the air and darkness overheard, in countless armies, changing their early or late summer habitat? It is something not to be forgotten. A friend called me up just after 12 last night to mark the peculiar noise of unusually immense flocks migrating north (rather late this year.) In the silence, shadow and delicious odor of the hour, (the natural perfume belonging to the night along,) I thought it rare music. You could hear the characteristic motion—once or twice “the rush of mighty wings,” but oftener a velvety rustle, long drawn out—sometimes quite near—with continual calls and chirps, and some song-notes.”

“When they are out hunting, their tails standing over their backs, their necks bent forward and their straight bills sticking out ahead, these little wrens have a most determined air! First you see one examining the sides and top of an old stump, running about, dipping down into the hollow, and then flitting off among the bushes, chattering quip-quap as he goes. Then one flies against the side of a tree to peck at a promising bit of bark and clambers several fet up the trunk to show what a good gymnast he is; and finally one pops up with a worm in his mouth, shakes it well before eating, and afterwards wipes his bill with the energy characteristic of the active, healthy temper of the whole wren family.” 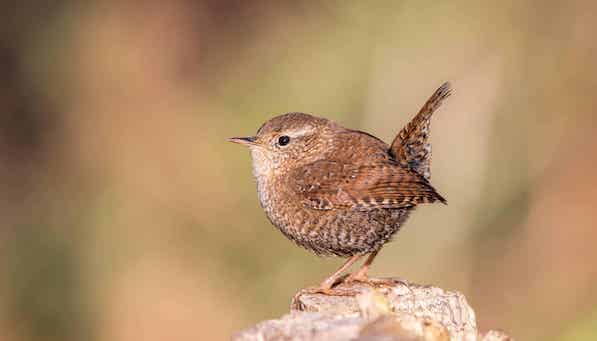 “How to Find Birds—The best times of the day in which to look for birds are early morning and late afternoon. After a night of fasting and resting, birds are active and hungry. When their appetites are satisfied, they may rest quietly until hunger again sends them forth in search of food.

Experience will soon show you where birds are most abundant. The more varied the nature of the country the greater number of species you may expect to find inhabiting it. An ideal locality would be a bit of tree-dotted meadow with a reed-bordered pond or stream, surrounded by woods, rolling uplands and orchards.”

“The robin is no hermit: he likes company; he likes the busy scenes of the farm and the village; he likes to carol to listening ears, and to build his nest as near your dwelling as he can. Only at rare intervals do I find a real sylvan robin, one that nests in the woods, usually by still waters, remote from human habitation. In such places his morning and evening carol is a welcome surprise to the fisherman or camper-out. It is like a dooryard flower found blooming in the wilderness.”

“I have been making the acquaintance of a very interesting little bird that flits about the falls and rapids of the main branches of the river. … It has the oddest, daintiest mincing manners imaginable, and the little fellow can sing too, a sweet, thrushy, fluty song, rather low, not the least boisterous, and much less keen and accentuated than from its vigorous briskness one would be led to look for. What a romantic life this little bird leads on the most beautiful portions of the streams, in a genial climate with shade and cool water and spray to temper the summer heat. No wonder it is a fine singer, considering the stream songs it hears day and night.” 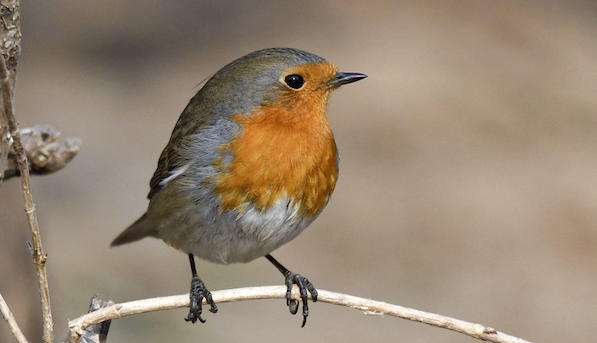 “During late August and early September, especially when the prevailing gentle, southerly breezes are supplemented for a day or so by winds from the northwest, tremendous numbers of tree swallows pile up near the tip of Cape May. This is the first spectacular bird event of fall. Roosting by night among the canebrakes of the phragmites, with as many as four or five swallows clinging to a single reed, and supplementing their insect fare by day with the frosty-gray berries of the wax myrtle or bayberry, they build up the fat that will provide fuel for the later, longer flights of autumn.”

“Just to the south, a great anti-immigration wall has been constructed, physically dividing one county from another. It blocks the flow of humans back and forth, and impedes the natural passage of animals that for hundreds of thousands of years have passed across that invisible line with the freedom of birds: jaguar, ocelot, coatimundi, Sonoran antelope, wolf, bear. Now all are cut off, all isolated. Only the birds can pass over and through, and where they are coming, there is already often no water. They come following the old pathways of memory, or perhaps hope.” 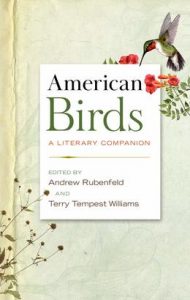 All excerpted from American Birds: A Literary Companion, edited by Andrew Rubenfeld and Terry Tempest Williams. Compilation copyright © 2020 by Library of America. Used by permission of the publisher. 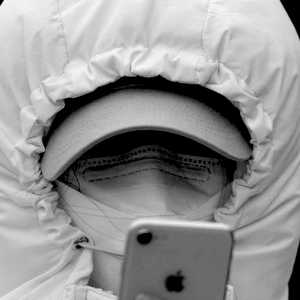