10 Songs for J.G. Ballard’s Post-Apocalyptic Vision of a Future London

Playlist for a Classic Novel: The Drowned World

Soon it would be too hot. J.G. Ballard’s 1962 masterpiece begins with this elemental observation—but of course it is already too hot. The novel takes place 60 or 70 years after “a sudden instability in the sun” has caused the ozone layer to evaporate and the ice caps to melt, turning most of the world tropical and shunting the few remaining humans to bases in the Arctic and Antarctic circles. Dr. Kerans works with a group of scientists and military men in one of the outposts, living alone in a top-floor suite at the Ritz above what was once London, and is now a lagoon. But when the rest of the group decides to retreat North in the face of rising temperatures and dwindling resources, Kerans—along with his closest compatriots, Beatrice and Bodkin—stays behind, simply waiting as the world continues to revert to its swampy former self, with 90-degree seas that burn at noon, alligators frothing under their fetid surfaces.

But instead of fighting the new world’s return to its ancient ways, Kerans is compelled to devolve along with it, haunted by jungle-dreams and mesmerized by what his friend Bodkin calls the “time-codes carried in every chromosome and gene.” “We are now being plunged back into the archaeopsychic past,” the scientist says, “uncovering the ancient taboos and drives that have been dormant for epochs. The brief span of an individual life is misleading. Each one of us is as old as the entire biological kingdom, and our bloodstreams are tributaries of the great sea of its total memory.” That internal sea tugs south, and Kerans longs to follow.

Enter Strangman, a creepily-white man with a creepily-white smile, and his merry, murderous gang of pirates, who have come to dredge up riches from the submerged city, and whose obscure motives will eventually drive the three holdouts to three very different fates. In the end, Kerans gets his south, though for how long, we don’t know.

Below, a list of songs to soundtrack the spiral into anti-time.

“Once in a Lifetime,” Talking Heads

So much of “Once in a Lifetime” reminds me of this novel—not only is the song concerned with water in an opaque way (“Remove the water at the bottom of the ocean!” yelps David Byrne, which is more or less what Strangman does), but it has the same sort of magical-hallucination/tropical nonsense feel as the text. As the book goes on, Kerans becomes more and more obsessed with time, or rather his dissociation from it, and finally gives himself up to that dissociation, and I can just see him sitting on a raft in the middle of a fiery sea, drifting listlessly, and whispering to himself:

This fuzzy track almost traces the same pattern as the novel itself: begins in repetitive, confused obscurity—some kind of scraping sound, or maybe a marching one, which then unfurls into a sticky beat and woozy lyrics. Those are eventually overwhelmed by the sound of water before they too change, breaking out into a manic joy that made me think of Strangman’s psychotic partying—hordes of men stamping ankle-deep in sludgy lagoon—before dissolving yet again into an uncanny machine-like un-silence that parallels with Kerans’s self-obliteration.

The living certainly isn’t easy in this novel, but the languid, heat-soaked instrumentation and Ella’s extra-slow vocals sound like exactly what Beatrice would be listening to in the opening pages, as she reclines in her favorite deck chair, “her long oiled body gleaming in the shadows like a sleeping python.” Or maybe later, as Kerans becomes one with the heat, drifting into a dream of jungle and sludge and moss and sun and perpetual summertime.

One of the saddest songs I can think of, and also a pretty apt sonic representation of the dissolution and melancholy that takes over Kerans, Beatrice, and Bodkin when they refuse to head north with the rest of their crew: “Your eyes are almost dead, can’t get out of bed/ And you can’t sleep/ You’re sitting down to dress, and you’re a mess/ You look in the mirror/ You look in your eyes/ Say you realize/ Everybody goes, leaving those/ Who fall behind . . .”

The tribalistic representation of the black pirates (Ballard calls them “Negroes”—but it’s 1962) in this novel is certainly problematic by today’s standards, but it’s actually the whiteness of their leader—bizarre and suspect in a world where everyone is deeply browned by a powerful sun—that is continually called out as menacing and “other.”  I can’t help but be transfixed by The Ballad of Mistah Bones, which a pirate named Big Caesar sings to Kerans, and which contains some of the weirdest and most evocative writing in the book, beginning:

Mistah Bones, he loves dried men,
Got himself a banana girl; three prophets sly,
She played him all crazy, drowned him in the snake wine,
Never heard so many swamp birds,
That old boss alligator.

Soon after the ballad is recited, Kerans is conscripted as sacrifice in “The Feast of Skulls,” a hallucinogenic ritual that seems to be equal parts dance and assault. The whole thing made me think of Screamin’ Jay Hawkins’s over-the-top, voodoo-tinged shock rock, and this song—though to be fair is more celebratory than it is frightening—evokes the book’s piratical, performative sequence.

Honestly, this song really just sounds like someone going slowly mad on a beach, writhing and grinding the back of their head further and further into the thick silt.

M.I.A.’s music has always given me a strong sense of bodies moving in hot weather (this may or may not be colored by having seen her in concert in sweltering heat, back in ye olde 2007), and this song in particular captures the sense of an epic journey through the jungle—an exodus, if you will, even if it is only an exodus of one.

“Under a Silent Sea,” Loney Dear

A song that manages to be melancholic and searching and also a little manic, like this novel. All that building seems like it’s going to lead to something—but of course, nothing leads to anything, unless it’s south.

I must have gone far, under a silent sea.
With nothing to fear, under a mile of sea.
It must have turned fast, cause I did not see it come.
I must have been slow, used to move so light.

Nothing is so relentless as the sun in this novel, and this song feels a little bit like getting beaten over the head—in a good way. And to a creative listener, perhaps the “she” could be interpreted as the sun herself: “She left you hungry/ She’s satisfied/ She watched you wilting/ She watched you cry/ She showed no remorse/For your pursuit”. . .

There’s a way to read The Drowned World as an extended suicide narrative—the story of a dying world and a man who feels compelled to die with it (and in both cases, perhaps be reborn). This isn’t exactly right tonally—a little thin, too much air let in to really feel like the thick, bright jungle—but I kept coming back to listen to it again and again after finishing this book, so perhaps there’s something going on deep in the memory of the blood. 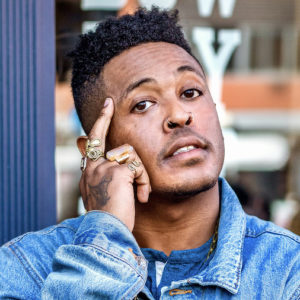 For this next installment in a series of interviews with contemporary poets, Peter Mishler interviews Danez Smith. Danez...
© LitHub
Back to top