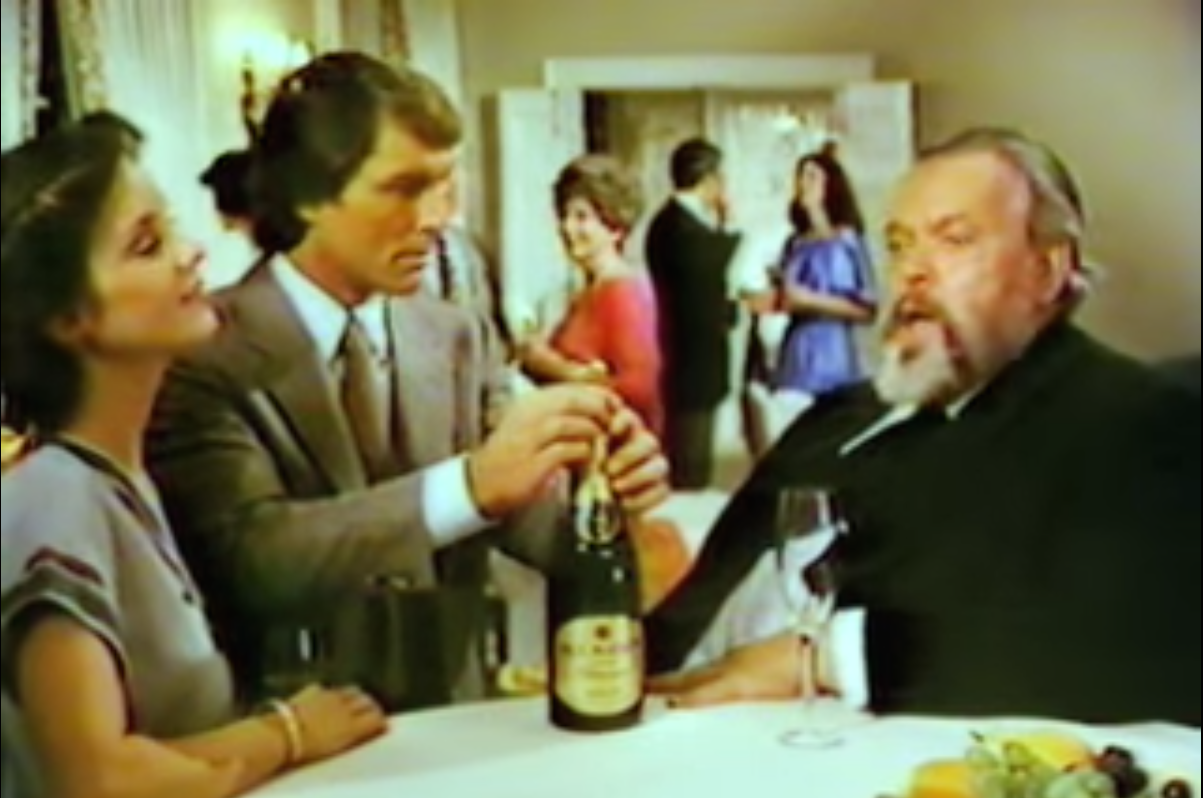 Distracted as we are by November’s Clash of the Predators, by the grim slog of the ongoing COVID crisis, by our tiger kings and our last dances and our normal people, we almost forgot about what is, unquestionably, the most significant cultural milestone of 2020. The fortieth birthday of a leaked recording so hypnotic, so influential, that its omission from the Library of Congress archives grows more egregious with each passing year. I speak, of course, of the 79 seconds of outtakes from Orson Welles’ 1980 Paul Masson champagne commercial in which the rotund and heavily inebriated auteur attempts to convey his love for the (sadly now-discontinued) California wine.

I have watched and re-watched this magnificent clip, parroted its every line, and interrogated its deeper meanings with a Mark Chapman-esque fervor since it was introduced to me by my brother some years ago, and now, on the occasion of its ruby anniversary, I bring you ten refections on a masterpiece:

1. The 10 second pause at the beginning wherein Welles briefly side-eyes his silent, presumably terrified, young co-stars. Can you still say you’ve worked with Orson Welles if the entire project was booze-blasted from his memory by the end of filming? Yes, yes you can.

2. “He doesn’t do anything?” A reasonable inquiry.

3. “Mwaaaaaugh the french…champagne.” A phrase I regularly speak aloud for no other reason than to break the silence, like a Pokémon reasserting its own existence.

4. Even shitfaced, has there ever been a more mellifluous speaking voice? No wonder everyone from the producers of the 1986 animated Transformers movie to the good people at Nashua Photocopiers were keen to make use of it.

5. How he taps, and later sort of tickles, the champagne bottle, as if there would otherwise be some confusion as to the subject of the commercial.

7. Once, during his three-year stint as the official spokesman for Paul Masson, Welles was asked during shooting to liken the wine to a violin by Stradivarius, to which he responded: “Come on, gentlemen, now really! You have a nice, pleasant little cheap wine here. You haven’t gotten the presumption to compare it to a Stradivarius violin. It’s odious.” Hero.

8. Make no mistake, despite his personal distain for the brand, Welles is high on his own supply here. One of the contractual obligations that the Citizen Kane director held Paul Masson to was a large, pre-shoot lunch. During those pre-shoot meals he usually finished off all the red wine in the room. Can you imagine how much wine it took to get a man of Welles’ bulk and legendary alcohol tolerance this drunk?

9. If you think that shilling for a low-end wine company represents the nadir of Welles’ career, remember that he also recorded this infamous commercial for Findus frozen peas. Whatever. The man did what he had to do to get his passion projects funded. You try to get The Other Side of the Wind financed in an era before Kickstarter and see how easy it is.