“For younger writers, TV’s as much a part of reality as Toyotas and gridlock,” David Foster Wallace wrote in his 1993 essay “E Unibus Pluram.” “We literally cannot imagine life without it.” Therefore, he argues, we shouldn’t be surprised to see contemporary writers responding to television in their work, despite the weird workshop bias against anything pop culture-related. But how often is television really the subject of literature? To be fair, Wallace’s 1993 essay is slightly dated—what he says about TV is true, but it’s also even more true (yes, even more true: this is now possible in the year 2018, when true/false has slipped the tyranny of the binary) about the internet—but Infinite Jest itself predicts a number of technological doo-dads that have since more or less come to pass (FaceTime, for one thing, FaceTime being a term, once you take a step back to really look at it, that sounds ludicrous enough for Wallace to have invented). Today is the 22nd anniversary of the publication of Infinite Jest, which is certainly the longest novel ever written concerning television, and probably the best. Here’s a list of that and other works that take television as a subject in one way or another—and as always, more suggestions are welcome below. 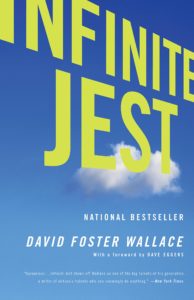 Technically, I think the deadly “entertainment” in Infinite Jest is a film, considering the career of its maker. But of course it is unspecified, and this is a novel of addiction—that is, it is a novel about being glued to your home teleputer for so long that you begin drooling into your cereal—and so more naturally concerned with television than it is with film. Plus, see Wallace’s aforementioned essay about how much television seeps into the literature of his generation. 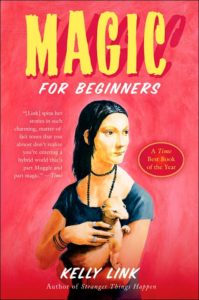 The title story of Link’s Locus award-winning collection (also published as a standalone novella—it won the Nebula and Locus awards in that category in 2006), concerns a boy named Jeremy Mars who is obsessed with a mysterious television show called The Library—which must be the best television show ever conceived, despite its actual nonexistence—that airs at unpredictable and unknown times. He is also in that show, which you are watching, except when you aren’t. The whole thing is a thrilling, metafictional hall of mirrors that ranks among the best work Link has ever done (which is saying something). 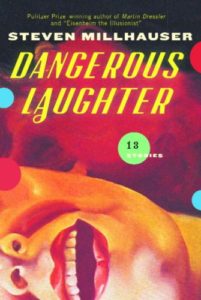 This story is almost a play-by-play of—well, really any old episode Tom and Jerry, which would be interesting in and of itself as a project (how does the form translate? how does the speed change?), but towards the end, also becomes something else: “The cat opens his jaws wider, closes his eyes, and hesitates. The death of the mouse is desirable in every way, but will life without him really be pleasurable? Will the mouse’s absence satisfy him entirely? Is it conceivable that he may miss the mouse, from time to time? Is it possible that he needs the mouse, in some disturbing way?” It is possible, yes. 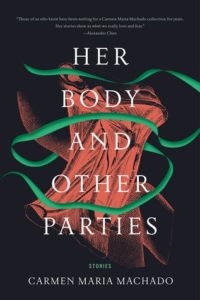 In which Machado summarizes every episode of twelve seasons of SVU, only the summaries aren’t exactly summaries, and the story isn’t exactly the story, and the exploitation and titillation of this cultural touchstone chases itself down, via doppelgängers. It’s a look both at the possibilities of story and form and of the repeated themes that dominate our popular consciousness. 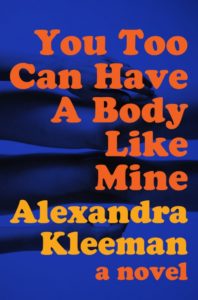 Alexandra Kleeman, You Too Can Have a Body Like Mine

Everyone is always watching television in this novel, particularly the commercials (especially the ones in which Kandy Kat chases a Kandy Kake past THE END OF THE WORLD), but also reality-tv (“That’s My Partner!”) and reality tv (the local celebrity hoarding veal). Valeria Luiselli called the novel “a non-nostalgic elegy to television,” but it’s also a critical look at beauty, friendship, and modernity—all things television is obsessed with too, by the way. 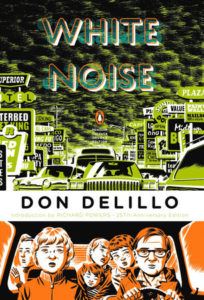 Television is so omnipresent in DeLillo’s best-loved novel as to become almost a character itself (“the TV said” is a repeated dialogue tag), and certainly a massive figure in the lives of his human figures, part of the fabric of the family, the everyday. In Journal of Sonic Studies, Justin St. Clair argues that the novel is wound up particularly with the sound of the television, and that

DeLillo’s attention to media aurality is characterized by a somewhat contradictory double logic. On the one hand, he echoes theoretical critiques at the time, offering . . . that television audio expressly manipulates an inattentive audience. He also follows contemporaneous scholarship in emphasizing television’s role as an ambient aural component of the American domestic space. DeLillo’s televisual critiques, however, while ranging from anxious to condemnatory, are counterbalanced by his wholesale appropriation and remediation of television sound: throughout White Noise, DeLillo deploys TV audio as a distinctly literary device. Ultimately, I would argue, such a dialectical engagement with media aurality—this simultaneous impulse to repudiate and to utilize—is the central mechanism of the heterophonic novel.

The TV, of course, being that titular white noise—always in the background, accepted without critical thought, essentially without meaning—or at least one example of it. 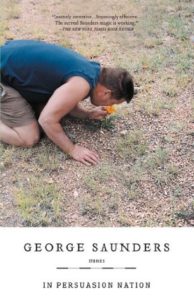 Lots of Saunders’s short stories have to do with television, in one way or another, but this one was the first to spring to mind. The eponymous Brad is a character in a sitcom on the brink of cancellation—not an actor, a character—living in typical Saundersian good-guy-oof-panic as the—world? producer?—whips up ways to keep viewers interested. You know, talking corpses, genitals in places they shouldn’t be, infidelity, the works! Ultimately Brad is left out in the gray cold of non-TV to become a blob, a state that sounds oddly like watching too much television. 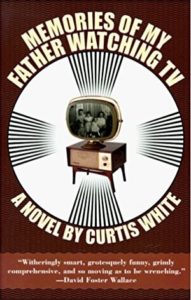 “As I’ve mentioned,” the narrator (a boy named Curtis White) tells us in one aside, “my father has been in a cataleptic trance before the TV since November of 1963. I think there was something hypnotic in the Kennedy funeral procession.” A manic, postmodern black comedy about a family stricken by television. 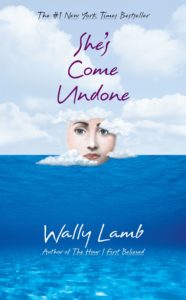 “Mine is a story of craving,” the narrator explains in the first pages of She’s Come Undone. “An unreliable account of lusts and troubles that began, somehow, in 1956 on the day our free television was delivered.” That free television, carried up the steps of her house by men she remembers distinctly as being President Eisenhower and Vice President Nixon complete with “the strings that would begin our family’s unraveling.” Another novel about growing up in front of the television, and what exactly it might do to you. 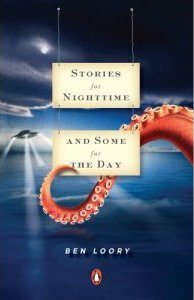 Ben Loory, “The TV,” Stories for Nighttime and Some for the Day

In which a man stays home from work to watch television, and begins to recognize himself in the show he’s watching. After all, that’s his desk, isn’t it? And that’s him, at work, talking to his boss? Driving down the road? Kissing that woman? But wait, what’s he doing now? 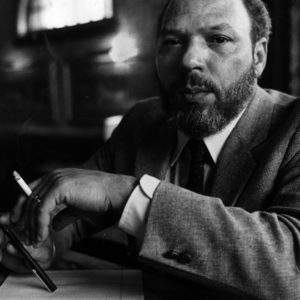 When Freddy Kittel moved to Crawford Street in 1965 and changed his name to August Wilson, he purchased an aged secondhand...
© LitHub
Back to top
Loading Comments...