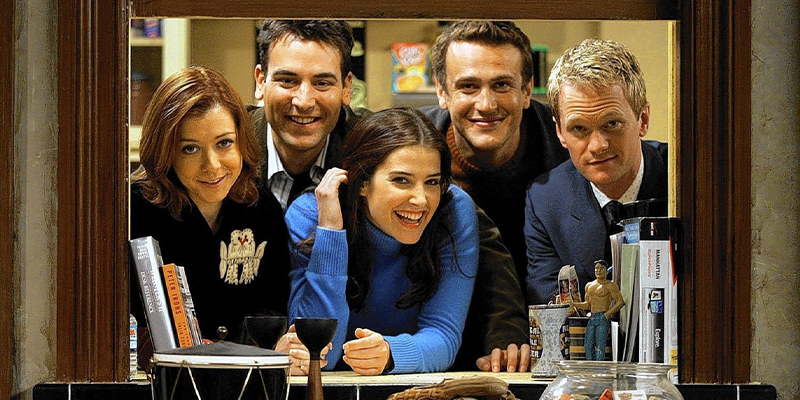 10 excellent storytelling tips for writers from How I Met Your Mother.

We’re finally getting that How I Met Your Mother spin-off! Yes, in case you haven’t heard, filming for How I Met Your Father has begun. It stars Hilary Duff—always and forever Lizzie McGuire to me, but she did recently capture the hearts of people working in publishing in her role as one of the most irresponsible editors ever in the hit show Younger. In anticipation of the new show’s release, I have decided to binge-watch copious amounts of the original. In my bright-eyed teenage years, this show gave me so many unrealistic expectations about living and dating in New York in my 20s. However, in my 20s, I have realized that it is actually very much an ode to storytelling. And that, kids, is how I met . . . this listicle.

1. Be really, really specific with dates and locations. (Know your timeline.)

Something I am always delighted by in the show is the way the characters have the most impressive recall. To prove a point, without missing a beat, they’ll start a story with a month/day/year and location to set the scene (often to relay something that happened off-screen or prior to season one). While difficult to pull off in real life, it’s a great reminder that our characters have led full lives before they walked into our pages, and that it would behoove us to whip out some of those specific memories every now and again.

2. Create (wait for it) anticipation.

Give your characters something to keep an eye on. Perhaps your plot is hurtling toward a tragedy or a big family dinner (same thing). Perhaps there’s a character with a fear established early on that will come back to haunt them. It’s Chekhov’s gun! Leaving breadcrumbs is fun for you, as the writer, and honestly, readers feel super smart when they get to say “I knew it!” People love being in on the joke. Just don’t show your hand too soon—unless it’s (wait for it) Slapsgiving.

3. Don’t be afraid to play with narrative framing.

The whole premise of How I Met Your Mother is a father sitting his kids down to tell them the incredibly long-winded story of his love life, so we already have the outer framework as a story consciously told. It creates an immediate intimacy. This structure also gives us Ted as character and Ted as storyteller. In creative writing workshops, they call this narrative distance. There is time to reflect when you’re not in the thick of it. I guess what I’m saying is: unleash Bob Saget.

4. There’s nothing wrong with earnestness!

There is obviously a fine line between sentiment and sentimentality. Ted Mosby often plays jumprope with this line, but on the whole, I’d say he leans into earnestness in a refreshing way. He just wants love, damnit! Perhaps to combat being overly sappy, the key is also be self-aware. The writers know he’s ridiculous. All the other characters know he’s ridiculous. They cheer him on anyway. There’s something kind of beautiful about that! (She said earnestly!)

5. If you have a character that’s starting to feel stagnant, introduce a wildly surprising background.

Robin was a teenage pop star in Canada? Barney grew up believing Bob Barker was his real father and that’s why he was never around? I’m not saying a character’s shitty behavior can be justified with a jaunt through their past trauma, but hearing the backstory certainly helps round them out as a full character. (There must be a reason Disney keeps remaking fairytales from the villain’s perspective, right?)

6. You can find humor in almost any situation.

Humor is part of what prevents this show from tipping too far into earnest mush (see: #4). The friends rib each other constantly. Their banter crackles. They commit to the bit (read: ducky tie). And even when things are really, really bad, there’s something funny to bring buoyancy. When Marshall’s dad dies, he’s heartsick the whole episode. The thing that lightens the mood in the end? Discovering a missed voicemail that was a butt-dial from his dad. Life really is like that, isn’t it?

7. Extrapolating grand theories of the world based on a few select characters is often wrong, but very memorable.

This show had a lot of grand theories about the way the world works. The Olive Theory, for example, was based on the show’s most stable couple; Marshall hates olives, Lily loves them, and that’s what makes them work. (Essentially, opposites attract.) Also: the Dobler/Dahmer Theory, which stated that big gestures are romantic if the feelings are mutual (a reference to Dobler of Say Anything) or creepy if not. The list goes on! Maybe it’s the blind confidence with which they introduce these blanket statements, but I personally think about them a lot and reference them all the time. It reminds me of that one friend who won’t shut up about all the terms they learned in Psych 101. It’s like the writers are giving us a shortcut to talk about things we all already kind of know. People will reference you! Chekhov’s gun!

8. When you manage to make two totally disparate storylines converge, it is immensely satisfying.

The writers of How I Met Your Mother were amazing at bringing things full circle. They worked some sneaky sleights of hand into the show, mostly through letting subplots feed into major overarching plots in a surprising way. Take, for instance, the episode in which the gang is fighting over everyone’s most annoying habits. In the background, Marshall is also about to find out if he passed the bar but misplaces his account password. The episode culminates in a screaming match between the five friends. They all start mocking Marshall for the way he’s always singing nonsense. As it turns out, the nonsense song he made up was a reminder of that very password. Full circle! A little misdirection goes a long way.

9. Gift your characters with the worst thought you’ve ever had. People might love them for it.

One of the most gutting moments of this show comes in the later seasons. Lily and Marshall have already had their baby. Robin is dating Barney, and Ted is heartbroken but trying to hide it. In a really touching scene, Lily and Ted are on the roof of their building. Because they’ve known each other a long time, Lily knows exactly what is running through Ted’s mind. She calls him on it. He claims to be happy for the couple. She responds, “If you said anything to the contrary, well, then that would make you the most awful person on this rooftop. So I’m going to give you an out […] by saying something more awful.”  And then Lily admits, “Sometimes I wish I wasn’t a mom.” Her admission is a small, sad, relatable shock. (Has fiction not taught us that we’re never as alone or as original as we think we are?) Plus, the thing that’s really special about the scene isn’t what she said, exactly, but the generosity of her honesty.

How I Met Your Mother was so good at imbuing a few choice objects with a whole lot of meaning. When done well, the imagery acts as shorthand for all the things we don’t have words for. The yellow umbrella! The blue French horn!