On Cliche, Stereotype, and the Struggle to Describe Blackness

“Who are you writing this story for?”

This was the question my colleagues posed to me last June during my residency at the Bennington Writing Seminars. I looked down at my 20-page excerpt and knew that I had to respond quickly but also honestly. I straightened up and proclaimed, “Myself.” Although I’ve been writing a novel a year since I was 14, this was the first story in which the protagonist was a black woman, or a black girl, rather. My past characters have always been racially ambiguous. “She” would have brown hair and brown eyes; “he” would have dark curly hair and broad shoulders. I’d always spent more time trying to create a believable, compelling plot than evaluating the role race plays in how a character navigates the world—a tendency, I admit, derived largely from fear.

Now that I’m writing a character that’s a clearer reflection of myself, I feel a responsibility to engage with what it means for that character to be black. In an interview with Rebecca Gross for the National Endowment for the Arts (NEA) Arts Magazine, Toni Morrison explained her thought process around writing The Bluest Eye: “I wrote the first book because I wanted to read it. I thought that kind of book, with that subject—those most vulnerable, most undescribed, not taken seriously, little black girls—had never existed seriously in literature.” Thanks to Morrison’s incredible contribution to the American literary canon, that problem is less severe, however ongoing it might be. I thought to myself: How can I depict blackness the way I live it? How can I describe blackness in the way that I see it in my dreams?

I didn’t know how to describe Vivienne and Tirzah, the main characters in the manuscript. If I wrote Vivienne as a light-skinned black woman, like me, would I be reinforcing white supremacist beauty standards, subconsciously making it easier for a white reader to sympathize with the character because of skin color? But if I made Vivienne darker skinned, would I be operating out of fear of criticism from the African-American community? The written beauty of a character is political, even more so for a black woman in prose who, as a character, has traditionally existed in the margins. In the American imagination the black woman, whether light skinned or dark, is already a sexualized entity, a character upon which so many stereotypes are projected. But as a black woman writing these characters, I need to write beyond the stereotypes, expose their idiocy one page at a time.

While working on this manuscript, I spent a lot of time looking in the mirror, trying to really see myself, and observing other black women around me—my mother, my sister, my friends. I thought about the color brown a lot, all of its clichés and comparisons: chestnut, mahogany… burnt umber? No-no, calling a black person “burnt” is an insult. And how to describe a handsome black man? “Chocolate”—despite its overuse—is always tempting as easy shorthand for desirability… but no, I decided I’d have to focus on the smoothness and richness of his skin, and rely on other metaphors. And how to avoid the clichéd language around a black woman’s gestures and gesticulations, her presence? How to describe the roll of the hips as she walks through the world, the movement of her hands to punctuate and perpetuate the momentum of her speech. The process was extraordinarily difficult, finding the words to match the magnificence of the black woman, language that would let her exist as a full human being in the minds of both black and non-black people—not a cut-out, not a cliché, not a stereotype. Bold, perhaps even proud.

And then there was the problem of her spoken language. The black women I know, including myself, are chameleons, able to switch linguistic modes based on the spaces they find themselves in, usually contingent on whether a white person is around. There is drama in this kind of code-switching (Russian literary critic Mikhail Bakhtin coined the term “heteroglossia” to describe multiple versions of a single language coexisting, and suggested the conflict created from that variety was good for fiction. Similarly, W.E.B. DuBois described the double-consciousness of the African-American forced to toggle between the American experience and Black experience.) To take DuBois’s idea one step further, the black woman has to deal with a triple-consciousness, as being American, black, and a woman can all come into conflict within one individual. My fingers always halted on the keyboard when I had to make my black female characters speak, as my brain worked through multiple registers of speech, like one of those overwhelmed switchboard operators from an old movie. I wanted my black women characters to speak that sacred, lively, and often boisterous language I think of as “kitchen talk,” that mocks white and black alike, is unafraid, real. Each time I wrote and revised, revised and wrote some more, I had to confront my fears, that someone would judge African-American Vernacular (AAVE) as less beautiful and melodic than standard English, that any non-black reader would disengage from the story from the moment he or she saw a double negative or gerund that didn’t end with a “g.” To be honest about black womanhood, its mistakes, its triumphs, is to make a reader see it as complex and dizzying as white womanhood.

I looked for myself in my words, in these descriptions of characters like me—I was uncomfortable and uplifted all at once by the reflection I found there. My hope is to create imperfect, multitudinous black women who are more in tune with themselves than their audiences. If I can’t eradicate my fears then at least I can work around them and make sure they don’t get in the way of allowing my characters to breathe and move as they should. That’s the greatest gift I can give my protagonists. And my greatest gift to you, the reader.

black womenblack women charactersessaysHow can I describe blackness in the way that I see it in my dreams?identityMorgan JerkinsToni Morrisonwriting workshop
Share: 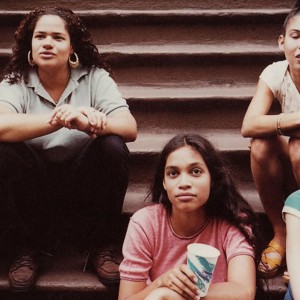 I almost killed my mother almost immediately. On the night I was born, in New York Hospital, in the fall of 1984, I tore...
© LitHub
Back to top