Winnie M. Li on What Writers Can Take from the Big Screen

I once heard a writer lament that most people these days only care about watching TV boxed sets, no one cares about books. On one hand, I can see their point: how many days and weeks of individual lives have been spent following the exploits of Don Draper, Claire Underwood, or Tony Soprano, when they could have been reading one of our fine novels? On the other hand, I’m of the firm belief that authors need to be consuming film and television because those screen-based storytelling techniques are so firmly ingrained in how our readers perceive narrative.

You can blame much of this on my own background. A childhood fascination with movies led to volunteering at film festivals, which led to a career as a film producer, where I regularly had to read and edit screenplays. Later, I programmed for an international film festival. A career in film was my alternate form of storytelling, since my parents had consistently reminded me during childhood that a career as a writer was too financially risky (they’ve since turned out to be right!). So as much as I loved writing from an early age, I never really considered it as a career path when I graduated from my MA in Irish Literature.

Fast-forward 15 years and at 38, I’m now a novelist. I no longer work in film, I no longer get invited to free screenings on a weekly basis, and it’s been months since I’ve read a script. Yet I still go to the movies voraciously. I’ll see anything as long as it’s decent: Oscar-worthy prestige pictures, foreign films, experimental docs, but also The Fast and the Furious franchise, horror flicks, teen comedies, rom-coms.  And when I’m not watching movies, I’m reading reviews of what I’ve just seen or flicking through IMDB to see what’s coming up. True, these are all great procrastination techniques for a writer, and a way for me to stay marginally connected to my former industry. But more importantly than that, watching films (and the occasional high-quality TV series) keeps me well-versed in what is perhaps today’s dominant form of storytelling.

As much as we writers don’t want to admit it, we live in an increasingly visual world. Many people would rather watch a two-minute online video than scan a news article. It’s impossible to escape the impact of film and TV. So as writers, we may as well embrace our competition. While reading other literature is the staple fuel that keeps us going, I like to broaden that diet to encompass other forms of storytelling: not just film and TV, but also theatre, dance, visual art, comic books. It’s all filling the well in the end, right? You never know how another creative medium can spark an idea in your own writing.

Case in point: my debut novel Dark Chapter. When it came to telling this particular story, I knew only one medium would work: writing fiction. The book is inspired by an event that happened to me nearly 10 years ago—and which, among other consequences, indirectly caused me to leave filmmaking. At the age of 29, the day before the red-carpet premiere of one of my films, I was violently assaulted and raped by a 15-year-old boy, who had followed me in a park.

Now as a general consumer of culture, I’d seen loads of film and TV scenes where characters are raped. I’d also read a number of books where the crime happens. But when it happened to me in real life, I realized all those numerous portrayals were nothing like the actual experience. What bothers me about screen depictions of rape is that you never get the interiority of characters involved in the crime. You’ll often get a close-up of the victim, you may even get her point-of-view, but you’ll never get her subjectivity, her thought process. And when an assault like that is happening to you in real life, there is no exteriority, you have no body: all you are is a jumble of thoughts and emotions.

So Dark Chapter is a fictional exploration of a crime very similar to my own real-life rape, but told equally from the perspectives of victim and perpetrator. It explores what their lives were like leading up to the crime and how their lives were affected for years afterwards. I specifically wanted to write fiction to imagine the life of a perpetrator that young, and answer the questions about my rapist, which have haunted me since my assault.

And when it came to writing the rape scene in my book, I knew I wanted to do something different, something that film and TV can’t do, even with their considerable powers of developing suspense and creating shock. The assault in Dark Chapter is a slow build-up between alternating viewpoints of two characters we’ve already gotten to know in Part 1 of the novel: independent Vivian, whom we know likes to hike on her own, and young Johnny, whom we know is capable of sexual violence.  We as readers have a sense of what’s about to happen, and suspense is created by Vivian having no idea what she’s about to walk into. But as the moment of violence approaches, the narrative perspectives (told in close third-person) alternate more rapidly, every paragraph, then every sentence, ratcheting up the tension—until the assault itself slips into first-person and becomes a confused mish-mash of thought fragments from the two characters, each in a very desperate situation.

Where did I get that idea? As bizarre as it sounds, the car chase scene in The Bourne Supremacy. Aside from being one of the best car chases ever on film, it generates tension from increasingly frantic editing, switching back and forth between the two drivers (Jason Bourne and a Russian assassin) in a panicked, handheld fashion. It’s chaotic, it’s confusing, and it conveys to the viewer a sense of things spinning wildly out of control. Kind of like what happens in a violent assault. And yet, the assault in Dark Chapter employs something film can’t offer: the interiority of the characters’ thoughts, which ultimately dominates the pages of this scene and creates an understanding for the choices the two protagonists will make during the rest of the novel.

So as we like to say in film, “It’s all in the edit.” And as an author, you are the ultimate film editor, choosing what scenes or thoughts you show or don’t show, how long you linger on a specific moment (or return to it), what perspectives the reader will see it from.

And I suppose in addressing a topic as momentous as my own rape, writing it as fiction gave me a sense of control I never had in real life. One where I got to call all the shots and make those editorial decisions. But all the lessons I absorbed from watching countless films have stayed with me.

So it’s impossible for me to forget that golden rule of screenwriting: get into a scene as late as possible, get out as early as possible. Trim the fat off your scene, reduce it down to the core of what’s really happening. Modern audiences (whether they realize it or not), probably know that rule, too, and readers will start to get impatient if a scene in your novel takes too long to heat up.

Thus viewers (which includes us) have developed an instinctive sense of pace, distilled from watching film and TV. And as writers, we can choose to embrace the plot-driven forward momentum of Hollywood productions, or the slower, more meandering pace of auteur or foreign filmmakers. David Lynch employs glacial pacing and elliptical plotting, and yet his work is so full of texture and mood that there’s much to learn from him creatively, even if he flouts the traditional rules. Aside from feature films, high-quality television series like Twin Peaks are a master class in the long game of plotting: how plot should always derive from characters, their interplay of personality and lived experience.

Editing screenplays also gave me a critical ear for dialogue, which helped a great deal in writing fiction. I can’t count the number of times I’ve scribbled “too on-the-nose!” in the margins of someone’s screenplay, and then later done the same thing when re-reading my own fiction. Readers aren’t stupid: they’ll know when dialogue sounds clunky, when it’s true to a specific character, and when it hits (intentionally or not) a clichéd phrase (“I’ve got a baaad feeling about this”). As humans, whatever we say is always filtered through our own insecurities; none of us say what’s exactly on our mind, and nor should any character in a book or screenplay (unless they’re a robot).

Then there’s the importance of visual imagery. I love when a good film pauses to have its moment of visual grandeur: that “A-ha” moment, when you as a viewer bask in the glory of a mountaintop panorama, a slow-motion nuclear explosion, or a CGI alien spacecraft. Or, just dwells on the beauty of dust motes floating in a beam of light. Whether huge or small, these visual moments have an emotional impact on readers, and I try to create moments in my fiction when I can pause on something visual to emphasize the mood or significance of a scene.

I could go on, but the on-the-nose, take-home message is that a familiarity with screen storytelling can feed and strengthen our work as writers. If we recognize the beats and approaches of film and TV, we’ll also know how to subvert them, challenge them, and employ them to our advantage.

As for me, there will always be a sense of loss over the film career, which ended prematurely as a result of my rape. But writing (which was always my original passion) has helped me to re-channel some of the storytelling approaches I learned from that medium. The savvier we are as writers in negotiating the techniques of the screen, the sharper and more original our own writing can be for 21st-century audiences. And inevitably, filmmakers and show-runners are always looking to books as source material for their next productions. All storytelling feeds off each other. So turn on Netflix and don’t feel guilty about it. And watch widely.

Winnie M Li graduated with Distinction in Creative Writing at Goldsmiths (where she was shortlisted for the Pat Kavanagh Prize 2015), she writes across a range of media, runs arts festivals, and is a PhD researcher in Media and Communications at the London School of Economics. She was Highly Commended for the CWA Debut Dagger Award and shortlisted for the Emma Humphreys Memorial Prize. She lives in London. Dark Chapter is her first novel. 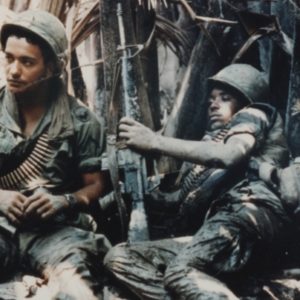 The newly arrived soldiers celebrate their first night in-country by filling sandbags and fall asleep on cement floors...
© LitHub
Back to top