Mai Tran on Art and Ego

The weathered floors in the Lillian Vernon Creative Writers House announced my arrival more conspicuously than I would like. I could already hear my classmates bantering as I made my way up the stairs and slipped into a seat near the head of the table, one I chose specifically so I wouldn’t have to raise my voice for the professor to hear me. I had spent the morning pre-planning every word I was going to say for the next three hours, but I knew I wouldn’t be able to relax even after I said them.

It was my last semester of undergrad at NYU, and I had been accepted to a master class in fiction. I looked forward to workshop every week, but the intimate environment also filled me with a familiar sense of dread, one that caused me to never speak unless called upon. I wrote all my workshop comments directly on people’s manuscripts, in case I couldn’t muster the right timing and courage to voice them, and only volunteered if I thought I had a view that no one else could offer, which was rare. In workshops dominated by louder characters, my writing often felt like the only sure space for me to be heard, but also the space where I had to prove myself and make up for my lack of contributions in class.

I have always been painfully shy, or socially anxious, to use a more clinical term. As a child I would hide and refuse to speak when my mom tried to induce me to talk to strangers, and between the fourth and sixth grades I was practically mute unless I was with family or close friends. My introversion generally fluctuates with my mental state but was exacerbated in college, where most of my classes were discussion-based and everyone was vying for the professor’s attention. I can talk to anyone one-on-one, but the pressures of academia and (possibly imagined) judgment kept me in a cycle of being too scared to participate, then feeling guilty for not participating.

The only times I’ve ever been told I have a “confident voice” has been in feedback to my writing.

The only times I’ve ever been told I have a “confident voice” has been in feedback to my writing. The first time it happened, on a piece I submitted for workshop, I didn’t know what they meant by it. My ideas have always been the same, but somehow get muddled and come across differently when I have to verbalize them, marked by long pauses and stutters. People seemed to warm up to me after they read my work, and I realized then, that in my writing I could be anything, and immediately, without the self-consciousness I almost always felt when meeting and getting to know someone new. And isn’t writing every socially anxious person’s dream—to meticulously rearrange and cull your thoughts until they are exactly as you want to be presented?

After graduating I committed to being a writer. I worked at a restaurant because that’s what Alexander Chee did in How to Write an Autobiographical Novel, I applied to MFA programs and submitted to literary magazines and media sites. After a lot of rejections, I had a pitch accepted at a newspaper’s online platform, and when I received the email I screamed and jumped out of my chair and proceeded to roll around on the floor. I grabbed my phone and texted my brother, “I feel like a real writer now.” I didn’t want to rely on external validations as finicky as publication for confidence, but every affirmation sustained me for a short time.

I had seen writers and journalists my age using Twitter to share their work—they put their writing credits in their bios, and I thought I should do the same to stay relevant, but it took months of gathering publications to take myself seriously, to declare myself as someone who wanted to be known for their writing. When I finally posted my bylines, I had to reread an Ocean Vuong quote multiple times, one I had written down from an event he did with NYU’s Asian/Pacific/American Institute: “What is ‘pretentious,’ but to have the pretense that you belong here?” But then I still felt pretentious, so I also posted a selfie of my butt, to equilibrate.

I read somewhere that to be an artist you have to have an ego, to consider your work worthy of being considered art, but I can’t reread anything I’ve written, let alone published, and I’m uncomfortable imposing or promoting myself. I didn’t shirk traditional 9-5 jobs because I believed in my writing, but because it is one of the only places where I am taken seriously, where I can shed my Gen Z age and be an angry Asian woman instead of the stereotypical shy Asian girl. I can pitch a dissenting op-ed and write with an authorial voice, and my editors and readers won’t know that I also enjoy making TikToks with my little sister, or that my voice is actually soft and low and I once chose to drop a full letter grade in a class rather than do a solo presentation.

But to say that I am quiet is not to say I am weak. After more than a year of waitressing and workshopping, I know how to not take things personally. I’ll probably always have social anxiety and dislike my writing, but I am content with that reality, and have developed methods to prevent it from holding me back. I keep a folder of anything nice anyone ever has said about my work, and refer to it when I need an extra boost. When I’m feeling slovenly in my apartment, I’ll go write at a coffee shop and posture with a black turtleneck and big earrings, and I’ll cuff my jeans to show off my fine line ankle tattoo, basking in the pretentiousness of it all. I’ll order an iced chai and squeeze into one of those tiny tables cursed by New York real estate, and if someone asks me what I’m working on, I could say I’m writing, and that would be enough.

Mai is a recent graduate of NYU, and is currently waitressing and living in Brooklyn. Her work appears or is forthcoming in The Guardian, The Rumpus, Apogee Journal, and elsewhere.

Ilya Kaminsky: 'Fables Allow You to Break Bread With the Dead' 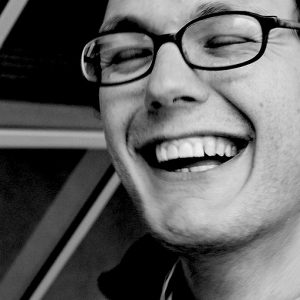 Ilya Kaminsky: 'Fables Allow You to Break Bread With the Dead'

Published with permission from BAM and the National Book Foundation What is it about courage that astounds our ability to imagine...
© LitHub
Back to top