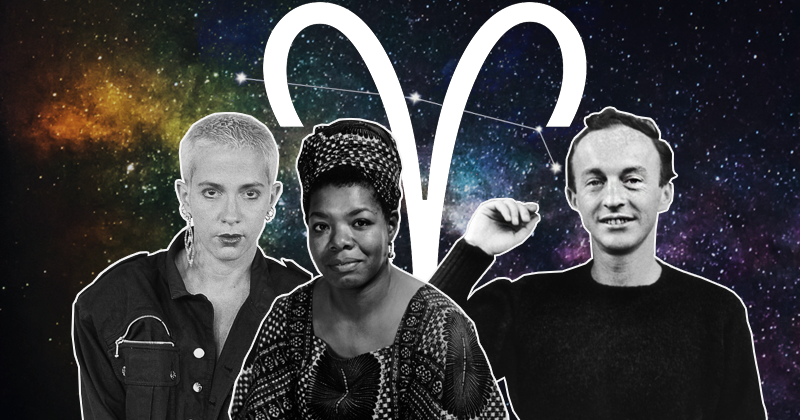 Writers of the Zodiac: Bold Aries, from Kathy Acker to Tristan Tzara

As anyone who has ever met an Aries can attest, Aries is always number one: it’s the very first sign of the zodiac, a newborn signaling the dawn of spring. In Aries season, flowers begin belligerently shooting pollen everywhere, much like an Aries writing at their desk—or an Aries doing anything, really. They are seminal, self-starting, and, stereotypically, self-centered, enthusiastically spreading their seed, regardless of the allergies of the weak. They’re not all temper, force, and head injuries, though. Although action typically precedes thought, Aries knows how to take a calculated risk. This can make them come across as ignorant or impulsive, but there is a fire inside of every Aries that moves them towards their goals, which they are loyally dedicated to. The sign’s Greek mythological symbol is the golden ram, which sums up how Aries perceive themselves: divine, unique, and legendary.

It’s appropriate for Aries season to begin on World Poetry Day on March 21. Poetry distills complex imagery, emotion, and mystery into a pure textual unit, materializing the abstract, much like the sun moving from nebulous, fantastical Pisces into this active, driven sign. If Aries were a literary device, it would be the direct address: focusing on someone in the crowd, singling them out, making them special. Poet Dorothea Lasky (b. March 27), the Aries half of the famed astrology Twitter account Astro Poets, understands the importance of making such appeals to the individual. She elaborated on this theory in an essay about Drake’s poetic greatness, comparing him to the autobiographical poet Frank O’Hara (who shares a birthday with Lasky—an Aries nod to her astrologically knowledgeable self). She explains that Drake, like O’Hara, “uses the direct address so effortlessly.” Aries are obsessed with individuality, be it their own or that of their audience.

Aries are natural leaders, setting trends for generations to follow. Tristan Tzara (b. April 16), the early 20th-century avant-garde poet and founding father of Dadaism, invented a method of writing poetry called “cut-up,” originating in “How to Make A Dadaist Poem.” Tzara was such an Aries for this one. Centering the primary foundation, the word, the basic unit that forms entire texts, is straight to the point in a literal cut-and-dry Aries way. It’s also redolent of Aries’ egotism; Tzara insists that “the poem will resemble you” and doesn’t need permission to take ownership over someone else’s words. After conquest and a little vapid curation, the appropriated text belongs to Aries. They’re so self-important that they believe their original voice can lay claim to a text simply through the act of repeating it.

Kathy Acker (b. April 18), Aries queen of the abject, famously used the cut-up technique to write entire novels. Her pastiche was political, crafting work by collaging together what she proudly called “plagiarized” texts. How punk! Acker created new, feminist texts from canonical classics—for instance, Don Quixote appropriates passages from The Prince, the script of Godzilla, and the original Don Quixote, among innumerable other seemingly random choices. The graphic violent and sexual imagery in Kathy Acker’s books was incredibly controversial and remains the subject of arguments between different schools of feminist thought. A true rowdy Aries, Acker wedged her literary cleaver right into the sex-positive/sex-negative argument that’s been happening since Andrea Dworkin.

“Aries aren’t afraid to ruffle feathers, because they see their unique perspective as an unchallengeable, a priori truth.”

Aries aren’t afraid to ruffle feathers, because they see their unique perspective as an unchallengeable, a priori truth. Ruled by the planet symbolizing the Roman god of war, Mars, they’re quick to stand up for themselves (and their friends). Count on an Aries to break an awkward silence with a risky wise crack, because they’re confident that everyone’s probably thinking the same thing, and if everyone isn’t on board, they really should be. Their revelations can be shocking, funny, or outrageous. Aries love to lead the way, ramming their head through obstacles and opponents.

Aries warrior Valerie Solanas (b. April 9) is best known for her overly-zealous call to arms, the SCUM Manifesto (1967). She spoke her truth, no matter how absurd it seemed to her peers, because it was her lesbian, sex-working, man-hating life. She wanted to be a leader, a hero, the golden ram carrying a misandrist cult following on her back. But nobody wanted to pay attention to Solanas. So, like a strong-willed, independent Aries woman who doesn’t need a man (whose life work was about how she doesn’t need a man, how nobody needs men, how society would be better off without men), she did everything herself, self-publishing her own work. Her singular, obsessive vision eventually alienated other feminists and, infamously, led to her shooting Andy Warhol—when something is in the way of a ram, they plow heedlessly through it.

Aries are comfortable with controversy, because their truth is powerful. Maya Angelou (b. April 4) bravely recounted graphic stories from her childhood and early life to convey her lived experiences with racism, sexism, violence, and poverty in the Jim Crow South. This has earned I Know Why the Caged Bird Sings a top-ranking place on the most commonly banned books since its publication in 1969—as well as on the list of those considered the best ever written. She challenged the conventions of narrative by using her own method of storytelling, expanding the genre of autobiography. Aries breaks ground like a flower emerging from the soil in the spring.

Aries artists stand out because of their unique, sometimes overpowering voices, truly of their own cultivation. Their energetic dedication to their craft creates prolific bodies of work. Aries is an incredibly confident sign for a writer to have; they aren’t afraid to take leaps, drawing unbreakable power and endless inspiration from self-righteousness. Writers born under this sign are blessed with a dynamic style and singular voice, giving them the potential to change the game for everyone else to follow, even if it alienates them in the moment. Greatness rarely goes unrecognized, and Aries will see to it that they get the attention and accolades they deserve. 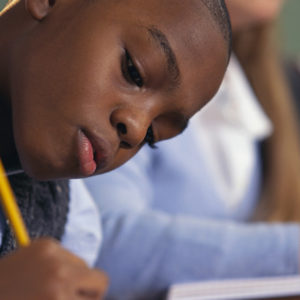 Each summer day, around noon, I would wait on my back porch for the mail truck. I could hear the truck’s steady hum in the distance—impossibly,...
© LitHub
Back to top