You Can Never Go Wrong Listening to This Guy

Ninety-four years after his birth (and more than thirty since his death) James Baldwin remains an intellectual, moral, and creative touchstone for many Americans—whether writers, critics, or simply people trying to live well in the world. Baldwin was an accomplished novelist, a legendary essayist, and an important civil rights activist—and most importantly for our purposes here, the man knew how to write a great sentence. His birthday is as good an excuse as any to revisit some of his teachings about the craft, and to that end, I’ve collected some of his best literary bon mots from essays and interviews below.

Write to find out.

I still believe that the unexamined life is not worth living: and I know that self-delusion, in the service of no matter what small or lofty cause, is a price no writer can afford. His subject is himself and the world and it requires every ounce of stamina he can summon to attempt to look on himself and the world as they are.

-from the introduction to Nobody Knows My Name

One writes out of one thing only—one’s own experience. Everything depends on how relentlessly one forces from this experience the last drop, sweet or bitter, it can possibly give. This is the only real concern of the artist, to recreate out of the disorder of life that order which is art.

Read as much as you can.

I read everything. I read my way out of the two libraries in Harlem by the time I was thirteen. One does learn a great deal about writing this way. First of all, you learn how little you know. It is true that the more one learns the less one knows. I’m still learning how to write. I don’t know what technique is. All I know is that you have to make the reader see it. This I learned from Dostoyevsky, from Balzac.

The story of what can happen to an American Negro writer in Europe simply illustrates, in some relief, what can happen to any American writer there. It is not meant, of course, to imply that it happens to them all, for Europe can be very crippling, too; and, anyway, a writer, when he has made his first breakthrough, has simply won a crucial skirmish in a dangerous, unending and unpredictable battle. Still, the breakthrough is important, and the point is that an American writer, in order to achieve it, very often has to leave this country.

-from “The Discovery of What It Means To Be an American”

Sometimes it comes very quickly. Seems almost to come from the top of my head. But in fact, it’s been gestating for a long, long time. Most of the time it’s not like that. Usually it’s a matter of writing, recognizing it ain’t right or it won’t move. You tear it up and do it again and again. And then one day something happens—it works.

-in a 1976 interview with Jewell Handy Gresham

But know when to stop.

When you’ve finished a novel it means, “The train stops here, you have to get off here.” You never get the book you wanted, you settle for the book you get. I’ve always felt that when a book ended there was something I didn’t see, and usually when I remark the discovery it’s too late to do anything about it.

Fight the conspiracy against you.

Any writer, I suppose, feels that the world into which he was born is nothing less than a conspiracy against the cultivation of his talent—which attitude certainly has a great deal to support it. On the other hand, it is only because the world looks on his talent with such a frightening indifference that the artist is compelled to make his talent important. So that any writer, looking back over even so short a span of time as I am here forced to assess, finds that the things which hurt him and the things which helped him cannot be divorced from each other; he could be helped in a certain way only because he was hurt in a certain way; and his help is simply to be enabled to move from one conundrum to the next—one is tempted to say that he moves from one disaster to the next.

Every form is difficult, no one is easier than another. They all kick your ass. None of it comes easy.

Don’t be too ironic.

You are speaking to an old rat. I find much of so‐called avant‐garde writing utterly trivial. If there is no moral question, there is no reason to write. I’m an old‐fashioned writer and, despite the odds, I want to change the world. What I hope to convey? Well, joy, love, the passion to feel how our choices affect the world . . . that’s all.

Don’t describe it, show it.

[My first drafts] are overwritten. Most of the rewrite, then, is cleaning. Don’t describe it, show it. That’s what I try to teach all young writers—take it out! Don’t describe a purple sunset, make me see that it is purple.

It is part of the business of the writer—as I see it—to examine attitudes, to go beneath the surface, to tap the source.

You want to write a sentence as clean as a bone. That is the goal.

I certainly can’t imagine art for art’s sake . . . that’s a European approach, which never made any sense to me. I think what you have to do, which is the difficult thing about a writer, is avoid slogans. You have to have the [guts] to protest the slogan, no matter how noble it may sound. It always hides something else; the writer should try to expose what it hides.

Talent is less important than diligence.

Talent is insignificant. I know a lot of talented ruins. Beyond talent lie all the usual words: discipline, love, luck, but, most of all, endurance.

Social affairs are not generally speaking the writer’s prime concern, whether they ought to be or not; it is absolutely necessary that he establish between himself and these affairs a distance which will allow, at least, for clarity, so that before he can look forward in any meaningful sense, he must first be allowed to take a long look back.

Write what you see.

I don’t try to be prophetic, as I don’t sit down to write literature. It is simply this: a writer has to take all the risks of putting down what he sees. No one can tell him about that. No one can control that reality. It reminds me of something Pablo Picasso was supposed to have said to Gertrude Stein while he was painting her portrait. Gertrude said, “I don’t look like that.” And Picasso replied, “You will.” And he was right.

Remember why you write.

The bottom line is this: You write in order to change the world, knowing perfectly well that you probably can’t, but also knowing that literature is indispensable to the world. In some way, your aspirations and concern for a single man in fact do begin to change the world. The world changes according to the way people see it, and if you alter, even by a millimeter, the way a person looks or people look at reality, then you can change it.

I consider that I have many responsibilities, but none greater than this: to last, as Hemingway says, and get my work done. 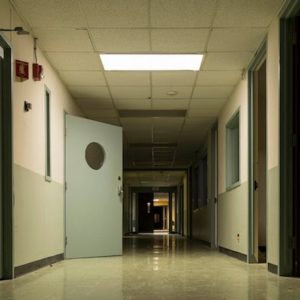 I rove supermarket aisles with my earphones in, listening to a podcast about abuse in out-of-home care beneath the hard white...
© LitHub
Back to top