Woods Work: On the Ancient Art of Coppicing a Tree

In this episode, after visiting a 2,000-year-old linden tree in England, William Bryant Logan explores the nearly forgotten practices of coppicing and pollarding, or cutting back a tree to stimulate growth, and discovers a symbiotic relationship between humans and trees.

Each of the four clock faces on London’s Big Ben is twenty-three feet in diameter, each minute hand fourteen feet long. Not one hundred miles away in Gloucestershire is an older, bigger circle that marks a surer, deeper time. It does not need to be wound. A flock of starlings or a heavy snowfall, settling on a minute hand, won’t slow it. It is never down for maintenance. It consists of a ring of living stools from a single linden tree—knots of slender stumps, eight to twelve of them in each stool. I stood in the middle of them, turning slowly around. There were twelve stools, not quite as regularly spaced as the hours on a clock face. They marked time not by hours but by centuries. Every twenty years, the trunks that grew up from these stools had been cut back nearly to the ground, then allowed to grow again.

This living ring is more than three times the diameter of each face of Big Ben. Where I stood at its center had once been the tree’s original solitary trunk. With each cut, the stems sprouted back out from the stump along the margins of the previous trunk, so that over centuries, they made a widening fairy ring that genetically was still a single tree. The year before my visit, more than one hundred long, straight trunks from the stools had been harvested, each about twenty to twenty-five feet tall. The trunks were bound standing together nearby into what looked like the world’s largest sheaf of wheat.

Big Ben is not quite two centuries old, but this tree has turned two thousand. One hundred times, it has had its rising trunks cut back to just above ground level. The tall poles were harvested for building, for charcoal, for firewood, for fiber to make ropes. Again and again. I was flabbergasted when I saw it. How can it be, I thought, that a linden so often cut and manipulated can be among the oldest living things in Britain?

Maybe I should not have been surprised. Trees are functionally immortal. In an ancient redwood, for instance, every year the Methuselah trunk gives rise to hundreds of thousands of brand new babies at the extremities of the twigs. As long as the old one can bring water to the babes and the babes can feed sugar to the aged mass, there is no reason that the tree should die. Trees live simply. They have only three organs—root, stem, and leaf—and only about two dozen possible patterns of growth. They live by repeating this simple module in their chosen pattern, from the scale of a trunk to that of the smallest twig. There is no reason why this reiteration cannot go on forever. Typically, Methuselah breaks or falls, leading to its failure, but even then, the creature may sprout again.

A tree is designed to live a long time, but why should it live longer when people cut it? Most history says the opposite: Once, there were pristine forests, the standard version reads. Then, people began to cut them. As human technologies improved, the woods fared worse and worse. In this view, the destruction began about nine thousand years ago, with the Neolithic stone axe. This tool—laboriously chipped, shaped, and polished—was as different from the Mesolithic axe as a knife from a bludgeon. It was sharp and durable. For the first time, people could harvest branches and, indeed, whole standing stems of trees. With short, sharp chipping strokes, a good axeman could fell a twelve-inch diameter oak in about half an hour. The Proto-Indo-European homonym varna—which meant both the noun “tree” and the verb “to cut”—suggests how important the axe and the wood it could harvest became to cultures around the world. Did the cutting kill the woods?

It did not, because the axe met the sprout. It turned out that when you cut many trees to the base or cut off branches at a height sufficient to keep the sprouts away from browsing herds—processes that in English came to be called coppice and pollard—they simply sprouted again, creating more new trees, more new branches than you had when you started. It may be that the wonderful hazel—whose nut was the staple of Mesolithic Europe and which naturally grew in a multi-stem, repeatedly sprouting form—inspired this learning. If you had eight stems to begin with and you cut four, you would get back all eight, along with three or four new ones.

Thus began around the world a practice not of extraction and imposition but of grateful exchange. Together, people and trees made a new kind of woodland, full of specimens like the ancient Gloucestershire lime tree. The trees that had been cut lived not a shorter but a longer time, often a far longer time. For millions of years, they had lived by repeating their simple three-part module—root, stem, and leaf—by supplying new parts to repair damage done by storms, falling limbs, or pests and pathogens. They were ready and able to respond to cutting. Furthermore, the repeated harvest on a regular cycle of three to twenty years removed older stems that might have had structural problems or potentially lethal infections, allowing the plant to begin afresh.

William Bryant Logan is the author of Sprout Lands: Tending the Endless Gift of Trees, Oak, Air, and Dirt. He is a certified arborist, serves on the faculty of the New York Botanical Garden, and is the founder and president of Urban Arborists, Inc. William is a contributing editor to House Beautiful, House and Garden, and Garden Design magazines, and is a regular garden writer for the New York Times. He is the recipient of a 2012 Senior Scholar Award from the New York State chapter of the International Society of Arboriculture (ISA), the True Professional of Arboriculture award, and an NEH grant to translate Calderón de la Barca. He has published many translations, including the work of García Lorca, Ramón del Valle Inclán, and Calderón. 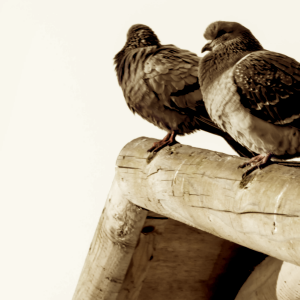 Overnight I witnessed the streets of San Francisco, where I live, go from bustling with traffic and pedestrians and café...
© LitHub
Back to top