With the Ancestors: Buki Papillon on African Folklore and Wakanda Forever

Buki Papillon, inaugural winner of the Maya Angelou Book Award in fiction, joins hosts V.V. Ganeshananthan and Whitney Terrell to discuss African folklore’s impact on popular culture. They talk about how the newly released blockbuster Black Panther: Wakanda Forever draws on the myths, histories, and languages of many African nations, including the tradition of calling to ancestors for guidance. Papillon, who was born in Nigeria, also reads from her prize-winning debut novel, An Ordinary Wonder, and discusses how she included folklore, proverbs, and deities from the Yoruba pantheon in the story, which follows an intersex protagonist seeking to claim her identity.

V.V. Ganeshananthan: Whitney and I are both big comic book movie and TV watchers and Black Panther is a favorite of mine. The original creators of the character of Black Panther were Jack Kirby and Stan Lee, who were, of course, white. But the writer and director of both Black Panther films, Ryan Coogler, is Black and he’s made some significant changes to the source material. When we were emailing to invite you on the show, you said, “Yes! Now I have this great reason to dash to the theater and see Wakanda Forever as soon as possible, which I was going to do anyway.” So I’m curious what you thought of how the movie treats that source material and draws on African histories and folklore.

Buki Papillon: It’s such a treat to be here with you, and for such a reason: to talk about Wakanda Forever. I loved it so much. I mean, the weaving and blending of traditions from African countries to create this entity called Wakanda. Where else are people of African ancestry going to draw from if not our common histories and folklore? I loved the massive lip plates on the base of one of the character’s lips—which is something that exists in an African country—the water drums that they beat to open the invisible gates, the holographic mountains that disguise the entrance to Wakanda, the chalk dot patterns and the raised scarification designs on the skins of the characters.

To see all these traditions, all these cultures, and all these people from African ancestry presented and celebrated and magnified from the gaze of the people themselves, and not from the gaze of people who have, from time immemorial, denied the beauty, the grace, and the magnificence, really, of African traditions—it is so particularly important in these times. I loved that so much.

I also think one of the best things about the world we live in being so interconnected now is the increased collaboration of Black artists and musicians and designers from around the world. That comes through so much in Wakanda Forever and in the previous Black Panther movie. There is a proverb that says that a single broomstick cannot sweep alone. And I think the coming together of all people of African ancestry to create these kinds of movies, these kinds of events, is a sign of great things that are coming in the future.

VVG: I also really enjoyed the movie, and you’re touching on one of the things that I admire most about it: it’s explicitly interested in being decolonial. There are more than a few colonizer jokes in this movie, among other things. One of the main ways that the movie is doing that is with its engagement with African traditions and folklore, which is very, very cool.

BP: Yes, yes. One of the things that I believe is that we are creatures that exist at the juncture of myth and imagination. And this is how we perpetuate ourselves. I think this is why the retelling of myths from all over the world is so popular today: We are beginning to look around and find out more and more about our universe and realize that it leaves us less and less sure of our relevance within it. And so this makes us look back to Okay, what makes us? Where are we from? We build our stories in order to be able to reassure ourselves of our existence. So these things really matter so much.

I read somewhere, someone was like, “What’s the big deal? It’s just a Marvel movie.” And this person—who was obviously not of African ancestry—if I had had the opportunity to sit down and talk to this person I would have said, “You know, if you’ve always seen yourself reflected back, it is perhaps impossible to grasp the depth and gravity of what was stolen from those who have been obscured or bypassed.

So it is impossible to really grasp that this is not just a Marvel movie. These are people who have not been traditionally able to see themselves as the heroes of the story, as people living independently in a land that is wonderful and technologically advanced.” All of these are the things I would have liked to tell this person. It’s not just a movie; we exist, like I said, at the juncture of imagination and myth. And so it is really important that we all see ourselves reflected back.

Whitney Terrell: Speaking of imagination and myth, there’s a ton of superhero stories in which a human is transformed in some way into an animal or a fish or a spider. And Black Panther is an obvious example of this. In African myth, deities can also appear in nonhuman form. Maybe they’re a little bit like superheroes. I did find this recent Time magazine article on Wakanda Forever by the writer and illustrator, Elizabeth Agyemang. She talks about the myths of Ananse, the trickster spider, who outsmarts all other animals. I wonder if you could just talk about the ways that gods and humans take on nonhuman form in African folklore and myth.

BP: Oh, yeah, I grew up with those sorts of stories. I always joke that Ananse is like a Ghanaian uncle—Ananse is from Ghana in tradition, and I grew up in Nigeria, I’m Nigerian—so he’s like the Ghanaian uncle who is the equivalent of Ijapa the tortoise. So the tortoise is a trickster character in so many stories that I grew up listening to. And also, he was a trickster that had access to the ears of the gods. So sometimes he would be really, really smart and get access to information that other animals didn’t have, but he would not always use it for good. These tales were told to help children grow up to be good citizens of the community, the way morality tales modeled decent behavior and taught valuable lessons. So Ijapa would do things like help the king trick some other animal.

There’s a short story about why the tortoise shell is not smooth. And that is because the animals were all really hungry and Tortoise had figured out how to make a rope so he could climb up to heaven. He figured out the thing to do was that every animal was to try and find out where all the other animals had hidden their mothers.

So he found out where Rabbit had hidden his mother and he tried to go up the rope and actually eat Rabbit’s mother. While he was going up the rope, Rabbit called out to his mother, “Cut the rope, cut the rope.” Rabbit’s mother cut the rope and the tortoise fell down, and he broke his back. So the morality of that is pretty much… that it’s not good to trick people. It is bad to take advantage of them. Tortoise takes on human aspects and human characteristics in order to provide a valuable means of teaching traditions and morals and good behavior to children growing up.

WT: I guess the closest parallel to that from North America is in Native American stories, the coyote acts as the trickster figure. I’m sure you’ve read some of those in a similar way.

VVG: One of the other places that some of the characters in Wakanda Forever go for moral guidance—while we’re talking about morality in all of this—is the spirit realm, and there’s a lot of ancestor worship. And in the first film, T’Challa goes to the spirit realm to see his father, T’Chaka. And in the second film—the one that we’ve just seen—Shuri, his sister, goes to the spirit realm in search of her brother and finds… I guess we’re not saying spoilers here. So I’ll just say she encounters a surprise. Your novel contains a lot of references to destiny, or Ori, of its protagonist, Otolorin, who is born intersex. I wonder if you can talk a little bit about those calls to other realms, how they draw on African folklore, how you use them in your book, and how you saw them in the movie.

BP: I love that in the movie. I love the way they have continued that in the previous and the current storyline. These calls to other realms that we saw—Shuri going back to try and figure out what was the right way forward—they center an important aspect of so many African spiritual beliefs, that death is only a transition, for example. So if I take that to the Yoruba traditions, the spirit realm is believed to literally exist alongside the natural world that we are living in. We are considered to be heavenly creatures that were sent to what the Yoruba literally call “the marketplace of life.” We’re here to trade, learn good behavior, and learn good manners so that we can return to the heavenly realm—from where we came—as good citizens, now fit to live in that realm.

If AI, Web3.0, and the Metaverse Are Utopian Pipe Dreams, What Internet Innovation Can Actually Help Save the World?

Alyssa Songsiridej on Reaching the Limits of a Self... and a Neighborhood 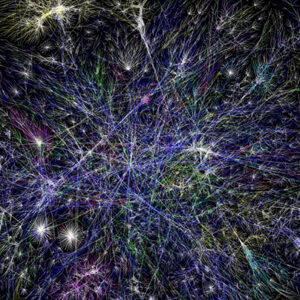 If AI, Web3.0, and the Metaverse Are Utopian Pipe Dreams, What Internet Innovation Can Actually Help Save the World?