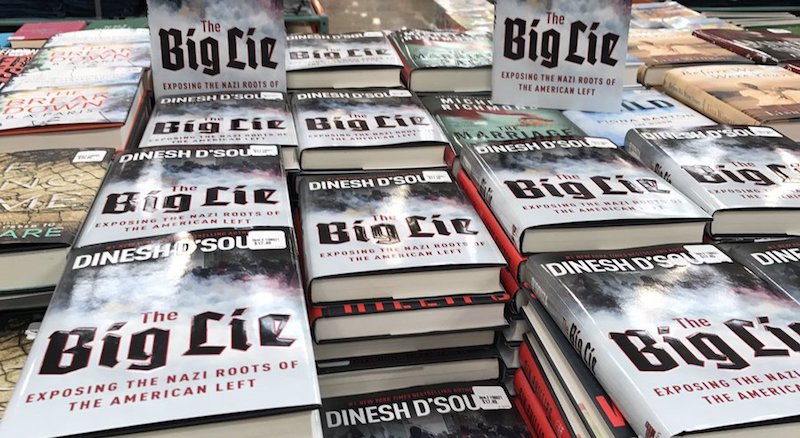 On Distortions of History and Providing Cover for Actual Nazis

Is Donald Trump a fascist? Did millions of Americans vote for an orange Mussolini? Well, recently the far-right commentator Dinesh D’Souza published a book intended not only to ease the consciences of anxious Trump supporters, but to hurl the “fascist card” back into the enemy camp to an even greater extent than Trump’s “alt-left” accusation. As the title suggests, The Big Lie: Exposing the Nazi Roots of the American Left breaks with the rigors of all pre-existing scholarship to argue that a cabal constituted by the media, Hollywood, and academia have conspired for generations to hide the “fact” that “socialism” and “progressivism” are forms of “fascism” and that “Nazi DNA was in the Democratic Party from the very beginning.” That beginning, of course, was in 1828—a century before the Nazi Party.

For D’Souza, supporters of the welfare state are the real fascists. Not the member of the “Alt-Reich” Facebook group who fatally stabbed an African American student named Richard Collins III in Maryland in May. Not Jeremy Christian, who had given Nazi salutes at a “free speech” rally weeks before going on a murderous rampage on a Portland train that left two dead in the same month. Not the hundreds of neo-Nazis who rampaged in Charlottesville including James Alex Fields, who murdered Heather Heyer. You know, the actual Nazis.

Likewise, for D’Souza right-wing libertarians are the only real anti-fascists. Not the labor unions, community self-defense organizations, and anti-fascist groups who tirelessly monitor local white supremacists, educate the public about their poisonous agendas, and confront them when necessary. No, as LGBTQ centers are attacked and mosques are burnt down, D’Souza’s “anti-fascist agenda” entails repealing Obamacare, Dodd-Frank, and tightening welfare provisions because fascism is “the all-powerful Leviathan state.”

In and of themselves such arguments are hardly worthy of sustained examination or rebuke. The Big Lie reads like an alt-right wiki where FDR was “our first Duce or führer,” Planned Parenthood is worse than Nazi eugenics, George Soros bankrolls the entire left, and slavery and indigenous genocide in the Americas, which began 500 years ago, were the sole responsibility of the Democratic Party. This from a writer who blamed 9/11 on liberals. D’Souza insists that there had been a vast societal conspiracy for generations to keep all of this a secret… until his book came out.

So why pay attention to this terrible book?

Because its warped perspectives are indicative of a growing portion of conservative public opinion—for such notions can only be held as opinions, not facts—that aims to destabilize and rewrite history in order to delegitimize the historically-based claims of the left. If Black Lives Matter turns to slavery and Jim Crow to argue that the United States has a white supremacist history, the right can take D’Souza’s lead by blaming everything on the Democratic Party while revering the “Republican heroine, Harriet Tubman.”

One of the most egregious examples is the half-truth that the KKK was the “terrorist arm of the Democratic Party.” While this claim made by D’Souza and Trump surrogate Jeffrey Lord is literally true, they leave out the fact that the characters of the two major parties flipped after the Democratic embrace of civil rights caused a mass exodus of racist southern Democrats to the Republican Party. We should critique the Democratic Party for its role in maintaining highly racialized structures of mass incarceration and class stratification. But right-wing efforts to counterfeit history intentionally impede the ability of social justice movements to leverage legacies of oppression and resistance to fight back.

Twisting history is not just about scrambling facts but also arbitrarily expanding and contracting definitions to make events fit predetermined narratives. By defining “the right” as the champions of limited government (though not limited with the military, police, or prisons) and “the left” as advocates of an interventionist state, D’Souza concludes that “fascism is exclusively the product of the left.” Fascism is a notoriously difficult school of thought to pin down, but D’Souza simplifies the task by selecting one aspect of fascism (its statism) to stand in for the whole. Historians of fascism have, indeed, debated whether fascism ought to be considered a phenomenon of the right or one that is “neither right nor left,” as Zeev Sternhell famously argued. None, however, have argued that fascism is entirely of the left because that makes no sense.

But D’Souza is not alone in promoting one-dimensional interpretations of fascism. As the past year’s news cycles show, conservative and liberal pundits often equate disruptive protest tactics with the methods of the Nazi Brownshirts. By letting that single aspect of fascism stand in for the rest, commentators have fallaciously argued that the anti-fascists, or antifa, who have challenged the growth of explicitly white supremacist politics since Trump’s election are the real fascists, or the “alt-left.”

Instead it’s important to set the historical record of anti-fascism straight. Anti-fascism emerged in the 1920s and 30s in response to fascist violence as communists, anarchists, and socialists desperately fought for their lives in the streets of Berlin, the alleyways of Rome, and the fields of Spain. Subsequently, the militant anti-fascist movement reemerged in the 1980s and 90s across Europe, North America, and beyond in response to the alarming spread of a violent white power skinhead movement. These modern anti-fascists drew lessons from their political ancestors: the liberal formula of rational discourse and parliamentary government did not stop Mussolini and Hitler. The only way to prevent a fascist sequel, they concluded, was to shut down the far right when it was still in its infancy—before it could gain enough power to make racism great again.

Over recent decades anti-fascists and their allies have successfully shut down large fascist marches in Salem, Sweden, Roskilde, Denmark, and Dresden, Germany. They have stood shoulder to shoulder with migrants and refugees as they face attacks from the fascist Golden Dawn in Greece, the neo-Nazi National Democratic Party in Germany, and other far right parties across the continent. In the United States, Canada, and South America the Anti-Racist Action Network developed hundreds of chapters composed of thousands of committed anti-fascists who kept the Klan, World Church of the Creator, and skinhead groups in check in the 1990s and into the new century. Today American antifa are among the most dedicated to depriving the alt-right any space in the public arena to join Trump in rolling back generations of progress won by movements for feminism, black liberation, and queer and trans liberation among others.

Anti-fascists refuse to “hear out” Nazis. They reject finding “common ground” with homophobes. If necessary, they will physically disrupt white supremacist rallies and speeches. These perspectives and methods fly in the face of the rationalist optimism of classical liberalism, which was brutally crushed by the carnage of the 20th century. Indeed, what is called militant anti-fascism in English, or autonomous anti-fascism in German, is a pan-left politics of social revolutionism applied to fighting the far right.

In such dangerous times, we must develop a clear and sober vision of the threat posed by the actual, self-described fascists of the alt-right and the president they adore. Whether you agree with anti-fascists or not, it is imperative to stand up to this threat. To see it any other way would be the real “big lie.”

Mark Bray is a historian of human rights, terrorism, and political radicalism in Modern Europe who was one of the organizers of Occupy Wall Street. He is the author of Translating Anarchy: The Anarchism of Occupy Wall Street, and the co-editor of Anarchist Education and the Modern School: A Francisco Ferrer Reader. His work has appeared in Foreign Policy, Critical Quarterly, ROAR Magazine, and numerous edited volumes. He is currently a lecturer at Dartmouth College. 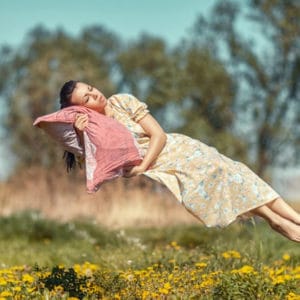 Conventional wisdom about dreams says that the more you describe them, the more you’ll remember them. Hence dream journals—not...
© LitHub
Back to top