Why We Read (And Write) Short Stories

The following is adapted from the introduction to 100 Years of the Best American Short Stories.

A story is a noise in the night. You may be lying there quietly resting in the international house of literature and hear something in the walls, the click and burst of heat through pipes, a difficult settling of eaves, ice sliding off the roof, the scurry of animals, the squawk of a floorboard, someone coming up the stairs.

This is life itself, surprising and not entirely invited. And yet we come to short stories seeking it. Or at least some vivid representation of it: a dark corner that is either turned and gone around or fixed with a light in order to discover what is lurking there. In a civilized society there arrives in a person’s day a pause long enough to allow for the reading of it—the corner, the pause, the day, the society: the exquisite verbal bonsai of a moment, of another’s life and consciousness, presented with concision and purpose—from a certain angle, in a certain voice, fashioned from a frame of mind that is both familiar and strange, recognizable and startling as a pinch.

It is a lovely shock of mercy and democracy to find that we need to spend time in the company of people whose troubles we might ordinarily avoid. Ring Lardner’s clueless barber. (“‘Shut up,’ he explained,” as Lardner wrote elsewhere.) Lauren Groff ’s bewitched eccentrics. Edward Jones’s lovelorn convicts. This is why storytelling exists in the first place. To inform us from and of Georgia O’Keeffe’s “faraway nearby.” It keeps us posted on the colorful swarming muck beneath a log. It both crashes in and lifts us out of the many gated communities of the mind. It animates (rather than answers) a question or two you may have about, say, Jesus. Finish a story and then you can return to healthy living, getting moderate exercise, appreciating unspoiled nature (good luck to you), and swooning at the wondrous universe as viewed in a clear night sky (rather than that narratively familiar dark and stormy one).

Make it interesting and it will be true: this is what story writers live by. In the way of Flaubert, storytelling is investigative and conjectural: we tell stories to find out what we believe. In the way of Joan Didion, we tell them “in order to live.” In the way of Scheherazade, we tell them in order not to die. Dreams, it turns out, are physiologically necessary for life. Presumably waking dreams are just as essential. Neurological experiments have shown that animals deprived of dreams die faster than they would by physical starvation. Science has also shown that stories help the mind make order and sense of random events. Furthermore, in a new study reported in the journal Science, subjects who read Alice Munro stories—specifically, the collection Too Much Happiness—demonstrated sharper social and psychological insight than those who did not.

Hey, we knew that.

But now there is empirical proof for others. In the words of Lorenz Hart, “When you’re awake, the things you think / Come from the dreams you dream / Thought has wings and lots of things / are seldom what they seem” (“Where or When”). He also wrote, “The clothes you’re wearing are the clothes you wore,” a condition familiar to any writer at her desk. There’s always room for a little Broadway.

Short stories are about trouble in mind. A bit of the blues. Songs and cries that reveal the range and ways of human character. The secret ordinary and the ordinary secret. The little disturbances of man, to borrow Grace Paley’s phrase, though a story may also be having a conversation with many larger disturbances lurking off-page. Still, the focus on the foregrounded action will be sharp and distilled as moonshine and maybe a little tense and witty, like an excellent dinner party. Writers go there to record hearts, minds, manners, and lives, their own and others. Even at a dinner party we all want to see rich and poor, life and death, the past and the present bumping up against each other, moral accomplishment jostling moral failure. Readers desire not to escape but to see and hear and consider. To be surprised and challenged and partially affirmed. In other words, to have an experience.

It is difficult for a short story to create a completely new world or a social milieu in its entirety or present an entirely unfamiliar one or one unknown to the author—so little time and space—so stories are often leaning on a world that is already there, one that has already entered the writer’s mind and can be assembled metonymically in a quick sketch and referred to without having to be completely created from scratch. To some degree the setting is already understood and shared with the reader, although the writer is giving it his own twist or opinion or observations or voice. To someone unfamiliar with such a thing, for instance, the zombie apocalypse might have trouble fitting into this genre, despite the short story’s great range of subjects, lengths, voices, and techniques. The short story’s hallmark is compression—even if the story sometimes extends to near-novella length. The short story needs to get to the point or the question of the point or the question of its several points and then flip things upside down. It makes skepticism into an art form. It has a deeper but narrower mission than longer narratives, one that requires drilling down rather than lighting out. Like poetry, it takes care with every line. Like a play, it moves in a deliberate fashion, scene by scene. Although a story may want to be pungent and real and sizzling, still there should be as little fat as possible. In its abilities to stretch, move through time, present unexpected twists and shapes, the short story is as limber as Lycra but equally unforgiving. (It is interested in the human heart, of course, an artificial version of which was first made in the 1970s from the fabric of a woman’s girdle—a fun fact and a metaphor for inventiveness, which will become clearer if one walks around the block and thinks about it a little.)

The abundant, crazily disparate imagery that comes to mind when considering and generalizing about the genre demonstrates what story writers all know: the short story is pretty much theory-proof. One pronounces upon it with spluttering difficulty. An energetic effort may send one into a teeming theme park of argument, mixed metaphor, tendentious assertion. It has been said that the short story is the only genre of literature that has remained pre-modern. Here I suppose the speaker is thinking of the campfire tale, and the telling of something in a single sitting: in this paradigm a story retains some of its primitive delights. The size remains organic to the occasion.

But the short story has also been declared the very first modernist literature (with which I am more inclined to agree). As a record of rebellious human consciousness, of interiority and intersecting intents, it is second to none in power and efficiency.

Feature image is a detail from James Tissot’s Reading a Story.

Lorrie Moore is the Gertrude Conaway Vanderbilt Professor of English at Vanderbilt University. She is the recipient of the Irish Times International Prize for Literature, a Lannan Foundation fellowship, as well as the PEN/Malamud Award and the Rea Award for her achievement in the short story. Over 50 of her essays were recently collected in See What Can Be Done. She is a board member for the American Academy of Arts and Letters. She lives in Nashville, Tennessee.

A Tender Account of Knitting, Young Love, and a Dick Cozy 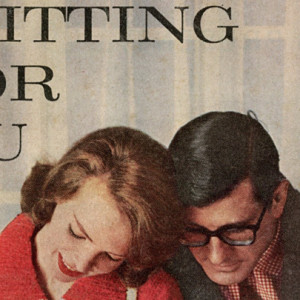 A Tender Account of Knitting, Young Love, and a Dick Cozy

I was lonely at Ithaca College after my high school sweetie dumped me for a boy who’d stayed home, 1971. And of course...
© LitHub
Back to top