Why We Need to Revisit Old Myths to Create New Ones

Michael Bazzett on How We Learn from Ancient Stories

Given the media circles I inhabit as a poet and a translator, I probably hear some version of the assertion—“We need new myths”—on a seasonal basis. As if myths could potentially be retired, or reanimated, or untethered from the collective subconscious of the various cultures from which they’ve sprung, and we’d be free re-imagine a world shaped by different stories. I see the appeal. Yet, revisiting those old stories is a necessary first step in that very process. Let me explain.

There is a moment in Mrs. Dalloway (a self-consciously modern novel if there ever was one), when Clarissa sits before the mirror of her dressing table and assembles herself, “collecting the whole of her at one point (as she looked into the glass), seeing the delicate pink face of the woman who was that very night to give a party…”

That verb “collecting” always catches me: how deftly Woolf communicates that what Clarissa is viewing is separate from her, a social image, not herself but her self, a separation underscored by the diction as the sentence continues: “…that was her self when some effort, some call on her to be her self, drew the parts together, she alone knew how different, how incompatible, and composed so for the world only into one center, one diamond, one woman who… made a meeting-point.”

To put it simply, I love this moment. How the now of the moment holds an entire life, “the moment of this June morning on which was the pressure of all the other mornings.” How the mundane carbon of daily life compresses into the diamond of a “self” under the pressure of her scrutinizing gaze. How Clarissa’s reflection evokes the idea of a fixed identity, while simultaneously destabilizing it.

Mirror, mirror, on the wall, indeed.

It’s a passage I often circle back to with students after we’ve begun examining the character of the shell-shocked Septimus, a shattered warrior returned from the Great War and in dire need of some re-assemblage himself. Though they never meet, he and Clarissa serve as counterpoint to one another in the novel, in some ways serving as the central relationship. But what is the axis that tethers soldier and socialite? It’s at this point that I often draw these symbols on the board…

…and ask what mythic narrative we’re inhabiting. What does it mean to be a woman in Clarissa’s milieu? Or to be this man, trying to come home, at last, from the war?

My students are always intrigued to learn the signs are hieroglyphs for Ares and Aphrodite. The feminine sign’s a simple line drawing of an extended hand holding a looking glass; the masculine role is embodied in a circular shield with a spear bristling out from behind it. The default gender binary of love and war is not subtle, to be sure, and many of my students are quick to dismiss it as caricature, a binary we’ve outgrown.

Yet, when I ask them to extend the implicit metaphors, a buried story begins to emerge. And it often holds more nuance than my students anticipate. They notice that the shield of Ares embodies protection and overlays the bronze blade of toxic masculinity. And the looking glass does not merely signify vanity or beauty—but also reflection, introspection.

If you hold a mirror up to someone’s reality and tilt it at an auspicious angle, are you not altering that person’s world? Where did the man disappear to, amidst the armor and spear? The questions resonate for both Septimus and Clarissa (the Greek classics were very much on Woolf’s mind as she composed Dalloway), but they also resonate well beyond Woolf’s pages. Within a few minutes of extending the metaphors in this way, the students often realize that the paradigm held in the shield and mirror glyphs contain the plot of Macbeth, in miniature.

“Remember, Perseus?” I ask them. Thanks to The Lightning Thief, many do. The fact that Perseus’s iconic heroic moment merges the roles by using his shield as a mirror is simply the tip of the iceberg, to be sure. As is often the case with the Greeks, heroes are most effective when mingling male and female energies. The only moment in the Odyssey when Odysseus actually straps on his armor, to face Scylla, he looks like a fool.

As I sometimes remind them, we’re not talking biology; we’re talking narrative. Roles are taken on and worn, wittingly and unwittingly. The only real question is, to what extent do we create these stories, and to what extent do they create us? For my students, the hieroglyphs are a useful tool in unearthing and evoking expectations, both old and new, even in our gender-diverse world. And Perseus’s doubling of the roles melts the binary into something more fluid, a spectrum that only gets richer when placed alongside constructs from different traditions, such as the first man and woman created in Norse mythology, Ask and Embla, both fashioned from trees, the Ash and the Elm.

In Neil Gaiman’s retelling of the Norse myths, the ash is “resilient and handsome, and its roots go deep. Its wood carves well and will not split or crack. It … makes a good tool handle, or the shaft of a spear.” Students are quick to note the echo of Ares but also the fact that man is merely a handle, to be wielded by the gods, and that qualities like resilience and malleability are implied as well. The elm is described as “graceful, but its wood is hard enough to be made into the toughest planks or beams; you could make a fine house or hall from elm wood,” echoing the hardwood toughness of the Ash, but also linking feminine energy to the structures that contain our lives.

Revisiting myth can also offer modes to reinterpret other constructs, such as whiteness. In Yuri Herrera’s marvelous novella, Signs Preceding the End of the World, he tells the story of a contemporary 21st-century border-crossing, overlaying the journey of the protagonist, Makina, upon the lattice-work of a passage through the Aztec underworld of Mictlán, creating a palimpsest where contemporary historical moment and indigenous mythic narrative coexist. The twinned stories unfold simultaneously, and Makina’s journey northward into whiteness echoes a voyage into the colorless realm of the dead.

When Makina first crosses over to the North, she notes how miserable the “anglogaggle” look staring into the screens of the self-checkouts at the supermarket. A life ordered around consumption and commodification drains the world of much of its color, and when Makina finally tracks down her brother, she doesn’t initially recognize him because he’s washed out, a ghost of his former self. Through a mercenary switch in identity, he’s quite literally become a part of the system, a soldier in the U.S. military, paid to take the place of a white kid whose family had second thoughts.

In the climactic scene where Makina says goodbye to her brother, having tracked him down at the urging of their mother, Cora, he tells her to give his regards to their mom, embracing her “like it wasn’t his mother he was sending a kiss to, but just a polite platitude. Like he was ripping out her heart, like he was cleanly extracting it and placing in a plastic bag and storing it in the fridge to eat later.”

If we want to re-imagine the world, a powerful first step would be delving into the stories we have.

The mother’s name Cora is, of course, an echo of corazón, heart. In traveling so far from the source and pulse of his familial home, Makina’s brother has slipped into a place of mythic whiteness, where things of value are “cleanly extracted” in order to become commodities and stored for later consumption. Herrera’s doubling of the underworld of illicit border crossing with the Aztec underworld enriches both tales and gives my students a new language and a lens to apply to the land in which they live, the mythic North.

Our ensuing classroom conversations about whiteness invariably land differently. The students have different handles to grasp onto. Whiteness here is linked with power, to be sure, but it’s also based on lack, on what is erased, on what people lose by becoming “white.”

These images from Herrera are what sprang to mind when, recently, I fielded a question as a visiting poet—Does revisiting myth make it easier to interrogate whiteness? As I pondered the question, the answer struck me as a resounding yes, especially insofar as whiteness is linked to settler colonialism. The washed-out characters in Herrera’s novella are not merely enactors of a last gasp of extraction capitalism; they’re simultaneously its victims, too, having been drained of a degree of their human vitality in becoming so pallidly white.

The answer is, of course, yes. And also, quite clearly, no. As old fashioned as it might sound, stories shape our world. The seven-day work week that structures our lives was brought to you by the book of Genesis. If we think of myths as stories we inhabit, often unwittingly, and thus re-enact upon the world, then the new vessels will come from the old, à la the ship of Theseus. We’ll be recasting the stories even as they carry us. Narrative is one of the most powerful technologies ever invented. If we want to re-imagine the world, a potent first step would be delving into the stories we have. 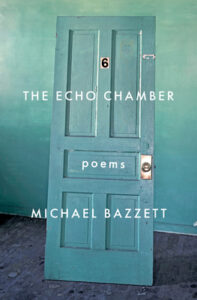 The Echo Chamber by Michael Bazzett is available via Milkweed Editions.

Michael Bazzett is the author of You Must Remember This and The Interrogation. He is also the translator of The Popul Vuh, the first English verse translation of the Mayan creation epic, which is forthcoming from Milkweed Editions. He lives in Minneapolis.

We Have Ways of Making You Talk on the Mafia, the Midway, and the War in the Pacific 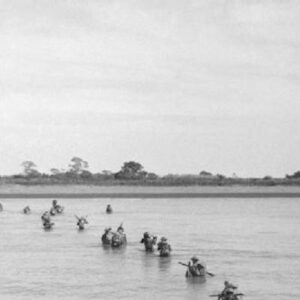 We Have Ways of Making You Talk on the Mafia, the Midway, and the War in the Pacific