Why the Coen Brothers’ Cinematic Sleight of Hand is
So Good

Nige Tassell on the Truths, Half-Truths, and Untruths of Fargo

“There are no whole truths,” the British mathematician turned American philosopher Alfred North Whitehead once declared. “All truths are half-truths. It is trying to treat them as whole truths that plays the devil.”

In the double-barrelled imaginations of the Coen brothers, truths even being half-truths is rather a generous appraisal.

For serial watchers of Fargo, there are forty-three words as familiar as the Pledge of Allegiance faithfully recited by American schoolchildren every morning. Forty-three words scorched indelibly on the front of their brain. They could repeat them in their sleep. Cue the opening titles.

THIS IS A TRUE STORY.

The events depicted in this film took place in Minnesota in 1987.
At the request of the survivors, the names have been changed.
Out of respect for the dead, the rest has been told exactly as it occurred.

Throughout the press campaign ahead of the film’s release in March 1996, the Coens maintained that each and every fold and crease of Fargo’s plot, every twist and every turn, was based in reality, based on events that had transpired as gruesomely as they retold them. Like a politician in denial about a sexual indiscretion, both individually and collectively the brothers were steadfast in their defence, pushing an untruth about a truth that was itself an untruth.

They were gobsmackingly brazen about it. “Everything we have done before has been entirely fictional,” declared Joel in the film’s official production notes. “Fargo, on the other hand, was a conscious effort to explore the spectrum of a series of non-fictional events.”

This brazenness continued when the Coens went eyeball-to-eyeball with journalists for interviews prior to the release. They managed to suppress any sniggers. They didn’t guiltily shift in their chairs. They held the interviewer’s gaze. It was a united front of falsehood.

“How close was the script to the actual event?” asked the legendary film critic Peter Biskind.

“We wanted to do something that was unlike the movies we had done in the past,” Joel expanded, “which were all sort of self-consciously artificial. We wanted to try something based on a real story.”

Another interview, another journalist, another question concerning the veracity of the tale. How had they found out about the original case and why hadn’t it received much attention at the time?

“It’s astonishing how things of that nature receive so little publicity,” bluffed Ethan playfully. “We heard about it through a friend who lived near to where the drama took place in Minnesota.”

Like a politician in denial about a sexual indiscretion, both individually and collectively the brothers were steadfast in their defence, pushing an untruth about a truth that was itself an untruth.

No such case. No such friend.

But, at this point, the media was unaware of this. Editors despatched their best reporters to seek out the original story, amazed that this complex web of deception, with a trail of dead that was both bloody and high (bloody high, in fact), had gone largely unreported in the nine years since it happened.

Of course, after hours spent trawling through dusty newspaper archives or putting calls in to law-enforcement agencies in upcountry Minnesota, they found nothing that tallied with the Coens’ tall tale.

“The New York Post found out it wasn’t based on any case studies and wasn’t true at all,” William H. Macy later told an audience at the Florida Film Festival. Joel and Ethan, reeling with faux horror, responded in quintessential Coen fashion: “We’re shocked something like this could have happened. An internal investigation is going on. Three people from our staff have been let go. We want to assure the public that they can expect quality entertainment from us in the future.”

With their duty to undertake all those interviews having been met, queues having formed nicely at cinemas, and tills a-ringing, the Coens began to come clean. Confession time.

In his introduction to Faber’s publication of the film’s screenplay, Ethan used the example of tales that his grandmother used to tell in order to muse on the nature of true stories, on how they bend and reshape themselves over multiple tellings. They get embellished with half-truths and fabrications. The boring bits get dropped. They become finely honed pieces of unreliable memoir, often only palely resembling the original events. And, of course, the stories of grandparents always find a believing audience among the wide-eyed offspring of their own offspring.

After a lengthy ramble of one of Grandma’s possibly tall tales (indeed, was his story about his grandmother’s possibly tall tales a possible tall tale itself?), Ethan devoted just one short paragraph of the introduction to Fargo itself. His final sentence was a clear admission: “It aims to be both homey and exotic, and pretends to be true.”

With their duty to undertake all those interviews having been met, queues having formed nicely at cinemas, and tills a-ringing, the Coens began to come clean.

No guilt was felt by the Coens, though. This wasn’t a deception of Jerry Lundegaard proportions. If a film-maker can come up with a fictional story, then it follows, with perfect logic, that a “true story’ notice at the start—but still within the parameters of the film itself—could be fictional too. As Ethan later explained, “You don’t have to have a true story to make a ‘true story’ movie.”

The notice wasn’t included simply for the purposes of the Coens to make some mischief at the expense of those sitting out in the stalls. There was method behind it. “If they’re told upfront that it’s true,’ Joel reasoned, “the audience gives you permission to do things that they might not if they’re essentially coming in expecting to watch a fictive thriller.” Furthermore, by claiming the whole sordid episode to be true, the drabness, the ordinariness of its setting could be justified.

Ethan hinted that the original intention might have been to find a suitably bloodstained real-life case deserving of being transferred to the big screen. But they drew a blank. “Not being acquainted with any true crimes that seemed sufficiently compelling, we made up our own “true crime” story.”

Years later—and we’re talking twenty years later—in an interview with the Huffington Post, Joel put more meat on the bones of the cases that did at least partly inspire the writing of Fargo. “There are actually two little elements in the story that were based on actual incidents. One of them is the fact that there was a guy—I believe, in the 1960s or 70s—who was gumming up serial numbers for cars and defrauding the General Motors Finance Corporation. There was no kidnapping. There was no murder.

“The other thing based on something real: there was a murder in Connecticut, where a man killed his wife and disposed of the body—put her into a wood chipper. But, beyond that, the story is made up.”

That he was still having to answer to the issue of truth a full two decades after the film’s release suggests the Coens were a little more adroit at playing Alfred North Whitehead’s devil than they might have thought. 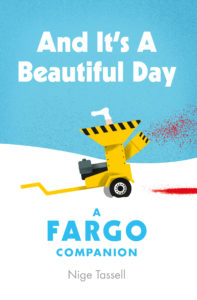 Nige Tassell writes about popular culture and sport. His work has appeared in The Guardian, The Sunday Times, GQ, Esquire, Q, The Word and New Statesmanamong others, and his previous books include Three Weeks Eight Seconds and The Bottom Corner. He used to live in Fargo’s snowy badlands, but never discovered where the money was buried.

Chronicle of a Fiesta: Remembering the Dishes of a Oaxaca Childhood

Saving Nora: What It’s Like to Operate on a 500-Pound Polar Bear 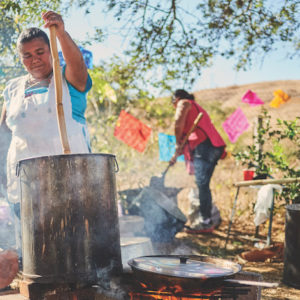 Chronicle of a Fiesta: Remembering the Dishes of a Oaxaca Childhood

It’s ten in the morning and I’ve arrived at the garden. About half a mile north of La Raya de Zimatlán lies the plot...
© LitHub
Back to top
Loading Comments...