Why Sesame Street Was a Revolutionary Force for Children’s Television

David Kamp on the Radical Creators of an Iconic Show

In the early months of 1970, in an old RKO movie theater on Manhattan’s Upper West Side that had been converted into a soundstage, a group of men and women of various ages and races were convening daily to finish up the first season of a children’s TV program that was still considered an experiment, not yet assured a second season. Its theme song began with a bass-heavy musical figure approximating a toddler’s expectant gambol toward a playground—womp-womp, womp-womp, womp-womp, wompa-domp—and a chorus of children singing, “Sunny day, sweepin’ the clouds away . . .” It was called Sesame Street.

Sesame Street was revolutionary in many ways, not least in its embrace of urban shabbiness. The year 1970 was not a particularly cheery one from a grown-up perspective, consumed as it was by anti-war protests, eco-apocalypse fears, and lamentations for America’s cities, many of which were falling into Midnight Cowboy decrepitude. Yet Sesame Street somehow managed to take comfort in the very conditions that the country’s no-hopers were bemoaning. As a Time correspondent who visited the show’s set that year noted, “The place is in the unavoidable present; the clothing of the cast is well worn, the umber colors and grit of inner-city life are vital components of the show.”

Sesame Street’s creative team infused this set with joy, effecting an innovative visual blend of scruffiness and gentle psychedelia that was enchanting to children, if sometimes confounding to adults. Today, the show is a beloved institution, its songs, look, format, and such Muppet characters as Big Bird and Oscar the Grouch familiar to several generations. But at the time of its development, Sesame Street was so radical as to be literally unimaginable to those not involved in it. Loretta Long, who played Susan, the program’s sunshiny maternal figure, recalled putting a scare into her parents back home in rural Michigan when, in 1969, she described her new job, which, to them, sounded like a drug-induced hallucination.

“I said to my mom, ‘It’s an educational show, and I’m going to be sitting on a stoop talking to an eight-foot yellow bird!’ As it was coming out of my mouth, I knew it was a mistake,” she said. “My mother got real quiet. She handed the phone to my father. He was very direct: ‘You going to do this when you come home from your real job, right, baby?’ ‘Well, Daddy, this is going to be my real job!’ I was so glad that I didn’t talk about Oscar. They already were thinking that I was having a breakdown. If I’d said, ‘And this thing is going to jump out of a trash can and yell at you,’ my mother would have been on the first train, smoking, coming to get her child.”

What’s notable from today’s standpoint is that there was no financial incentive for Sesame Street’s founding duo to do what they did.

As unhinged as the show sounded to the uninitiated, what it stood for was hope. The streetscape was concrete, but the emphasis, metaphorically, was on the little shoots of greenery that sprouted through the cracks in the pavement. Three and a half years before Sesame Street’s November 1969 premiere, on PBS, the idea for the program had been hatched by two friends at a dinner party: Joan Ganz Cooney, a producer of documentaries for public television, and Lloyd Morrisett, a vice president at the philanthropic Carnegie Corporation. Deep in conversation at Cooney’s New York apartment, they identified a social problem, that poor children were entering kindergarten without the learning skills of their middle-class counterparts, and a potential solution, to use television to better prepare these disadvantaged kids for school. Could a new kind of kids’ TV program address this issue? Cooney and Morrisett resolved to find out.

What’s notable from today’s standpoint is that there was no financial incentive for Sesame Street’s founding duo to do what they did. Theirs was not an entrepreneurial undertaking, a start-up in the modern sense of the term. Jon Stone, one of Sesame Street’s original producers and its driving creative force in the show’s early years, later said of the team that Cooney and Morrisett assembled, “None of us was going to get rich from his labors. But the challenge of the assignment and the creative freedom granted us to meet that challenge was heady stuff, and we took our responsibility very seriously.”

Then in their mid-thirties, Cooney and Morrisett were exemplars of John F. Kennedy’s “Ask not what your country can do for you” ethos, proud to fly the flag of the New Frontier: the late president’s slate of programs designed to lead the United States to new heights of greatness and positive influence, be it in the form of anti-poverty initiatives, the Peace Corps, or space exploration. The only wealth that entered into Cooney and Morrisett’s considerations was “human wealth”—a coinage of Morrisett’s that he used to describe what society was squandering: the untapped potential of disadvantaged children, the contributions that these kids might make to the wider world if only given the chance.

This idealism did not exist in a vacuum. Sesame Street was part of a larger movement that saw an optimistic contingent of grown-ups—mostly media professionals and thought leaders in academia—leveraging their influence to help children learn and become better citizens. A year and a half before the show’s premiere, Mister Rogers’ Neighborhood had made its national-TV debut, hosted by a gentle ordained Presbyterian minister named Fred Rogers, who had already logged fifteen years in the television industry. And fast on Sesame Street’s heels came Schoolhouse Rock!, a short-form video series dreamed up by Madison Avenue admen that used music and animation to teach kids times tables, civics, and grammatical rules, and Free to Be . . . You and Me, the TV star Marlo Thomas’s audacious multipronged campaign (it was first a record album, and then a book and a television special) to instill the concept of gender equality in impressionable young minds.

More broadly, these developments unfolded in an unusually hospitable political climate. For all the polarization that characterized the late sixties and early seventies—as epitomized by the anti-war movement and the conservative backlash against it—there was widespread support among the American people and their elected representatives for investing in the country’s youngest citizens. The signature achievement of President Lyndon B. Johnson’s War on Poverty was the Elementary and Secondary Education Act of 1965, which allocated federal funds to public education on an unprecedented scale, to nearly twenty-seven thousand school districts, and explicitly sought, as Sesame Street later would, to close the “achievement gap” between children from lower-income and middle-class households.

Another Johnson administration achievement, the Public Broadcasting Act of 1967, set up the Corporation for Public Broadcasting, a nonprofit entity that distributed federal money to local public television stations, much of it for the purpose of financing educational programming. When, in 1969, a U.S. Senate subcommittee was contemplating cutting the CPB’s proposed budget in half, to $10 million, Fred Rogers, already one of public TV’s foremost champions and stars, traveled from his home base of Pittsburgh to Washington, D.C., to make his case for keeping the budget in place.

In his customary unhurried pace, Rogers explained to the sub-committee’s brusque, skeptical chairman, Senator John Pastore, Democrat of Rhode Island, that his program delivered “an expression of care” to each child viewer, adding, “I feel that if we in public television can only make it clear that feelings are mentionable and manageable, we will have done a great service for mental health.” The senator, a self-professed “tough guy” from the mean streets of Providence, softened palpably over the course of the six-plus minutes that Rogers spoke, finally concluding in his Federal Hill accent, “I think it’s wondah-ful. I think it’s wondah-ful. Looks like you’ve just earned the 20 million dollahs.”

The further we get from this era, this Age of Enlightenment Jr., the more remarkable it seems.

The Rogers-Pastore exchange has become a viral sensation in the YouTube era: a glimpse of a more civil and civic-minded time. But more than that, it represents how transformative this period was for children’s culture. “Feelings are mentionable”—this would prove to be a signature sentiment, whether it was expressed, in a marvelous incongruity, by the hulking former NFL defensive lineman Rosey Grier in the Free to Be . . . You and Me song “It’s Alright to Cry” (because “crying gets the sad out of you”) or by Sesame Street’s Kermit the Frog as he quietly sang “Bein’ Green,” which, in less than two minutes, cycled through expressions of insecurity, inadequacy, self-acceptance, and pride. (The song quickly evolved into an American Songbook standard, covered by Frank Sinatra, Lena Horne, and Ray Charles.)

What was new about these shows, relative to the children’s programming that had preceded them? They didn’t patronize their audiences, and they acknowledged the interior live of kids. Far from being derided as squishy or snowflaky, this respectful, empathetic approach to engaging children was widely embraced. Sesame Street succeeded well beyond its creators’ expectations, reaching not only its intended demographic of kids in need but virtually the entirety of preschool America. The songs and stories of Free to Be . . . You and Me were incorporated into the curricula of thirty-five of the fifty states.

And these programs happened to coalesce into a movement during a particularly fun, fertile, anything-goes artistic period, in which monsters could be benign and blue (Cookie, Grover) and anthropomorphic traits were routinely ascribed to letters, numerals, and even rolled-up pieces of paper (e.g., the titular star of Schoolhouse Rock!’s “I’m Just a Bill”).

The further we get from this era, this Age of Enlightenment Jr., the more remarkable it seems. It came together organically, by accident as much as design, “stalked by good luck,” as Cooney put it: with like-minded individuals finding one another just when they needed to. It was an era of umber colors and grit, to be sure… but also of sunny days. 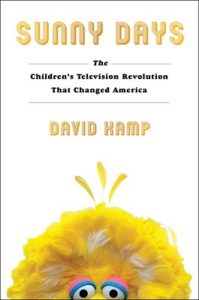 David Kamp, author of Sunny Days, is an author, journalist, humorist, lyricist, and a charter member of the Sesame Street—viewing audience. A longtime contributor to Vanity Fair, he has profiled such cultural icons as Johnny Cash, Sly Stone, Lucian Freud, Bruce Springsteen, and Phoebe Waller-Bridge. Among his books are the national bestseller The United States of Arugula, a chronicle of America’s foodways. His first musical as a lyricist, Kiss My Aztec!, a collaboration with John Leguizamo, had its world premiere at Berkeley Rep in 2019. He began his career at Spy, the legendary satirical monthly. He lives with his family in New York City and rural Connecticut. 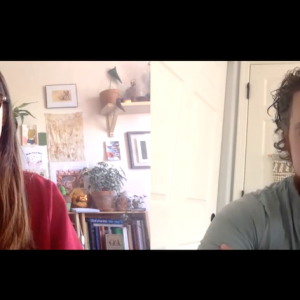 Featuring the good news and the bad news from the week in books, the big titles everyone is talking about, the best reviewed...
© LitHub
Back to top
Loading Comments...