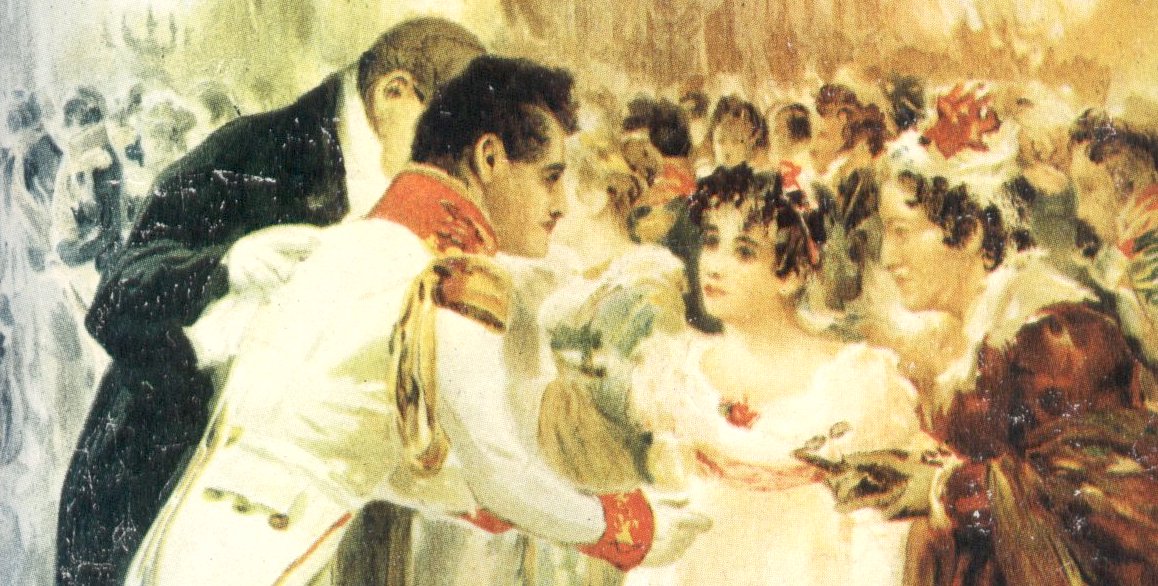 Why I Walked Away From War and Peace… Forever

Two Novembers and hundreds of pages ago, I began reading Tolstoy with someone I thought I would marry. We chose War and Peace, which now seems like metaphor or prophecy, in the translation by the married couple Richard Pevear and Larissa Volokhonsky, adding insult to injury. We were inspired by the Broadway production of Natasha, Pierre, and the Great Comet of 1812, the two-plus hour adaptation of the fifth book of the second volume of that novel, whose run ended that same November as dramatically as, well, a Russian novel. Before the untimely end of its run, she had seen and cried through it three times. This too now feels prophetic, and somewhat biblical.

The one time I saw it with her I too cried, three separate times. When what we had ended in a second and final breakup—no rule of three here—I promised myself I would finish the book alone.

I tried mightily to do this. I felt like Pierre, the disconsolate Count Pyotr Kirillovich Bezukhov, self-isolated in his chambers with nothing but the pages of his books for company. “Here at home, I drink and read and drink and read and drink, and I fill my mind with rot, while my heart is empty,” Pierre sings in “Letters,” the opening number to Great Comet’s second act. Except I wasn’t reading. Still, scrolling through Instagram looking at pictures of us together, Pierre’s words bounced around my brain as I thought, Don’t we all.

All told, I’ve only ever made it through the first volume, out of four and a two-part epilogue, of War and Peace. I did so two and a half times, each attempt a few months or so after the last, so my thoughts on the novel should be taken with several grains of salt and crumbs of black bread. Like this one: shouldn’t Count Lev Nikolayevich Tolstoy’s sweeping magnum opus have been called, simply, War? Or maybe, taking a cue from Hungary’s László Krasznahorkai, War and War?

The book is balanced between two primary settings, the front lines of the Napoleonic era French invasion of Russia and the long untouched former capital of Moscow. But the peace is not peaceful at all, filled as it is with interpersonal tensions and tragic loves, broken hearts and betrayals—at least as far as those first few hundred pages or so are concerned. Love, too, Tolstoy shows, is a battlefield, wearing down whichever warriors are entangled in it and with each other. In the end, as in the song by the late Leonard Cohen, himself a weary field commander in the great war of love, the combatants can only say: “I wish there was a treaty we could sign. I do not care who takes this bloody hill. I’m angry and I’m tired all the time. I wish there was a treaty between your love and mine.”

During my reading, plagued by grim meditations on romance and its absence, I found myself continually distracted by lyrics of heartbreak to which the book, dramatic as it is, seemed eager to send me. The Great Comet soundtrack made up some of that listening, but albums by Cohen and others did as well. It all proved an unbearable distraction. I couldn’t lose myself in Tolstoy’s tale, only in my own lost love, and in the bitter embrace of its memories.

To wit: a couple of months and a handful of library fines after our reading project started, the woman I thought I would marry bought us matching, hulking paperback copies of the Pevear and Volokhonsky War and Peace as a birthday present to me. Inscribed on the half-title page of mine, below the title and above the birthday wishes, the valediction, her signature, and the date, was an epigraph, although it now seems more an epitaph. It was a choral line from Natasha’s soliloquy solo song from The Great Comet, written next to a small scrawled image of a shooting star: “You and I and no one else.”

Here was a promise of constancy, one whose irony—that Natasha, the Countess Natalya Ilyinichna Rostova, does not end up married to its subject, Prince Andrei Nikolayevich Bolkonsky—does not escape me. After what we had was over, as I kept stubbornly reading with that quote lodged in my mind, all I could think of were the opening lines of “A Case of You” by Joni Mitchell: “Shortly before our love got lost you said, ‘I am as constant as the Northern Star,’ / and I said, ‘Constantly in the darkness? Where’s that at? / If you want me, I’ll be in the bar.’” Personally, I was mostly at home, but that didn’t keep me from also being in the bar.

Lyrical poetry, for me long a haven from emotional onslaught or, at least, an isolated tavern where I might wallow in relative solitude, proved nearly as devastating and distracting. I’m supposed to be reading War and Peace, I would tell myself as I restlessly picked through my bookshelves in search of any other book at all. One night I picked up a favorite collection, Louise Glück’s The Wild Iris. Reading it, I found myself stuck on one poem, “Vespers: Parousia.” With it, Glück kicked me in the teeth:

I try to win you back,
that is the point
of the writing.
But you are gone forever,
as in Russian novels, saying
a few words I don’t remember—

I tried to win her back. That was the point of the writing, at first. It was the point of the reading, too, or at least that was what I told myself: that through reading I was keeping a promise, even if it was a promise she could not, or would not, keep. But our love was gone forever, as in Russian novels, and thinking it wasn’t almost killed the writing. In the end, it killed the reading instead.

I couldn’t lose myself in Tolstoy’s tale, only in my own lost love, and in the bitter embrace of its memories.

I had promised myself I would not finish the essay until I had finished the book. But as love is often broken, so too are the pledges that gird and garnish it. Like the passions of Natasha, the Countess Natalya Ilyinichna Rostova, in War and Peace, the essay would become a different thing than what was promised. It would have to, if it were to ever end.

I saw the woman I thought I would marry again this past fall, at the latest Broadway revival of Oklahoma. New York is a big city but a small town, just like Moscow, and the longer you stay, the smaller it gets. That she was there was just my luck, a dramatic turn worthy of a Russian novel, or at least Chekhov.

The show was at the Circle in the Square Theatre, which has a stage extending into the audience on three sides. She was sitting diagonally across the stage from me, with her new suitor, and whenever the cast moved upstage, it was impossible not to see her there, in the blush of new love, hanging on him as if it were they, and not Oklahoma’s Curly McLain and Laurey Williams, who were to be wed at the end of the final act.

I was there for Oklahoma, but what kept coming to my mind was The Great Comet. That is to say, what kept coming to mind was Tolstoy. The theater’s walls were lined with stage prop rifles, and how easy it would be, I thought in a moment of madness, to pull one of them down and challenge the suitor to a duel as Pierre did Fyodor Ivanovich Dolokhov—a mock fight to the death over her and I and someone else.

When I returned home from the show, I took my copy of War and Peace down from the shelf for the first time in more than a year to inspect it. Its spine still unbroken, what little character it does have past its accursed inscription is from water damage. I had taken it, you see, to read on the subway as I rode toward the first date I dared attempt after the months alone at home wherein I drank and read and drank. It was pouring that evening, yet foolishly I thought it would be safe enough from the weather in my backpack. It wasn’t.

The damage is mild but marked, and the birthday inscription, valediction, her signature, and the date are all at least lightly smeared. Only one part of the inscription is completely illegible, though: a single heart drawn in black ink, now smudged past all recognition.

Flipping past the half-title page, I found I had tucked away a folded copy of “Vespers: Parousia” on printing paper, as if having it in a collection now right next to War and Peace on my shelf hadn’t been distracting enough. The poem still felt like a boot to the face, but now I read it with different eyes, to which it offered a different lesson:

What a nothing you were,
to be changed so quickly
into an image, an odor—
you are everywhere, source
of wisdom and anguish.

I folded the poem up again, slipped it back into the book, and put War and Peace at the very back of my top shelf behind another row of books, where it remains. I can’t quite let it go yet, so for now, hiding it will have to do. One day, perhaps, I’ll be able to rid myself of it. Of all of it.

In the meantime, I think I’ll give The Idiot a read instead.

John H. Maher is a writer and editor living in Brooklyn, NY. An award-winning journalist and poet, John is news editor at Publishers Weekly, and has written for the Los Angeles Times, New York magazine, and Esquire, among others.

Daniel Mendelsohn on How Greek Tragedy Speaks to Our Present Moment

Did a Revolution in Latin American Publishing Make One Hundred Years of Solitude the Success It Is Today? 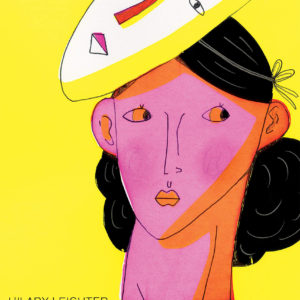 Daniel Mendelsohn on How Greek Tragedy Speaks to Our Present Moment