Why I Started Publishing an ‘Indigenous Version’ of My Articles

Two years ago on Thanksgiving Day, I reported from North Dakota along the muddy banks of Canté Peta Creek on the borderlands of the Standing Rock Sioux reservation. The Indigenous-led movement to try and stop the Dakota Access Pipeline had drawn a massive crowd.

The demonstrations happening that day had little to do with observing Thanksgiving, a highly problematic holiday for many Native Americans. This aspect, however, was seemingly lost on my editor, a middle-aged white man residing a few states away.

Today, the link to that story is evidence of what happens, journalistically speaking, when editorial decisions are determined by those less familiar with Indigenous-minded points of view.

“Thanksgiving at Standing Rock, Activists Dig In,” reads a segment of the URL linked to that article. The coded language in the address bar is all that remains of my editor’s original headline, one that I requested be changed immediately after the piece went live.

“Natives and Thanksgiving?” I wrote to him.

Fortunately, I didn’t have to explain why Thanksgiving for many Native Americans is historically contentious, or for that matter, why his branding of my article with this holiday was entirely irrelevant to the scope of my reporting (the afternoon protests during the monthslong campaign went on just like it did any other day). Yet as an independent journalist, the exchange was deeply reflective of the kind of delicate diplomacy that is as much a part of my craft as the actual journalism itself—caretaking of my client relations alongside caretaking of the authentic Indigenous narrative.

In a pursuit to expand the Indigenous narrative to wider audiences, I have seen what I consider to be relevant and worthy Indigenous perspective routinely gutted from the articles I write. Rarely do these omissions see the light of day by readers.

In October, I began self-publishing an “Indigenous version” or an author’s edition to accompany my commissioned works. It followed one of the more lengthy and arduous edit sessions I’ve endured with a team of non-Indigenous editors.

Until recently, the URL for that story, published in 2016, was one of few visible examples of the editorial negotiating that often exists in my collaboration with colonized newsrooms.

In October, I began self-publishing an “Indigenous version” or an author’s edition to accompany my commissioned works. It followed one of the more lengthy and arduous edit sessions I’ve endured with a team of non-Indigenous editors. The process, for me, felt more strenuous than the actual field reporting—

and the results were underwhelming. Certain lexicon and ideology central to Indigenous preferences were tonally off, I told my client. The photo layout also felt wayward.

The story was about a tent city made up of mostly Native Americans in downtown Minneapolis. It resulted in a 2,500-word feature article, almost double from what was earlier assigned. I was grateful for the extra space that my client allowed and for their brand-name distribution.

The truth is, though, I was also embarrassed to see my byline associated with what went online, particularly with regard to the spelling of the acronym for the American Indian Movement, or AIM. In the published article, it is lower-cased as “Aim.” I quickly emailed my editor to try and change this.

“I respect style guides but Indian Country (my own people) will judge me greatly as if I don’t know anything about this legendary org,” I wrote. 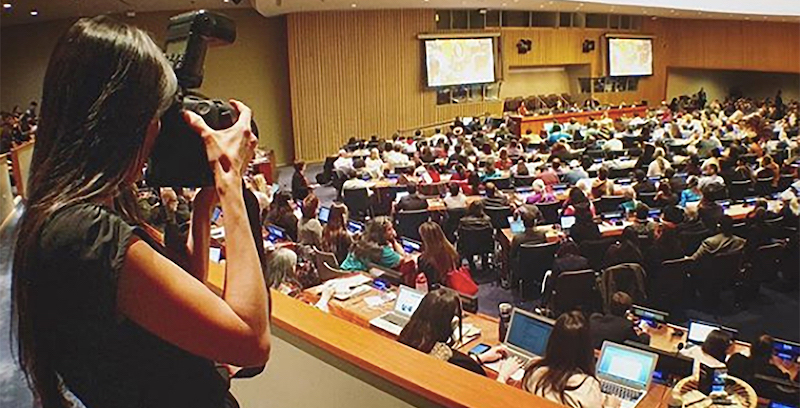 Jenni Monet reports at the General Assembly of the United Nations in 2017. Photo courtesy of Jenni Monet

Most fascinating to me, in all this editorial banter, was the omission of a line describing the Indigenous people living at the tent city as a demographic “literally homeless on their own homelands.” That this phrase was cut across three rigorous rounds of edit sessions typifies my struggle: I am often met with subtle condescension by decision-makers who seem to see Indigenous perspectives as advocacy-laced or, perhaps in their view, unreasonable.

When I sent other options back to the newsdesk for revisions, my suggestions resulted in little change. I turned to Facebook to grouse.

“For all those who think that journalism is an easy gig, think again,” I wrote in my post. “What most people don’t know is, that as an independent journalist, I often times do not get the chance to see the final version of my work prior to it going live, online. It means, sometimes, I’m no different than you, the reader, in seeing for the first time the finished product.”

I am often met with subtle condescension by decision-makers who seem to see Indigenous perspectives as advocacy-laced or, perhaps in their view, unreasonable.

I went on to describe the “multiple small stands” I fought for and had, at times, won in the editorial process. Despite some of these gains, though, the story was still imperfect in my view. It fell short of my rigorous standards. And so I would self-publish an alternative version that did.

To understand what it means to colonize the Indigenous narrative, one can easily turn to the colonizer itself for further review. The Economist recently published an article about the rise of Native American politicians in the United States which has since been described by some critics as nothing short of insulting, and it is.

Littered throughout the piece is the use of out-of-touch language, points of view, and cringe-worthy art which describe tribal community, at once, as a “picture of wretchedness” while also stirring lingering stereotypes linked to the environment, casinos and what’s known as the Cherokee Grandma Syndrome (a phenomenon of people who claim Cherokee ancestry). At one point, the unidentified author writes how Oklahoma’s first Native American governor-elect, Kevin Stitt, a Cherokee, “does not look Indian at all.”

The article, which features an illustration of the US Capitol topped with a feathered headdress, is maybe the worst display of modern journalism about Indigenous Peoples I’ve seen. But it’s fitting in describing the lazy, discriminatory and damaging writing that comes from the deep roots of colonization in our newsrooms.

Today, journalism represents one of the whitest workforces in America, an industry that does not look like, sound like, or reflect the diversity and experience of nearly half the US population, which consists of people of color.

According to recent data by the Pew Research Center, roughly 77 percent of today’s newsrooms are staffed with non-Hispanic white employees compared to all other American labor pools. White men make up the majority at roughly 60 percent. Parsed even further, data from the Women’s Media Center this year found that female journalists of color like me represent just seven percent of US print newsroom staff, twelve percent of local TV news staff and six percent of local radio staff. The figures get more discerning when examining Native American journalists employed today—less than a quarter of a percent, according to some statistics.

What stories and perspectives are missing in today’s newsfeeds? It’s for this reason I’ve felt compelled to risk potential discord with my pool of clients in self-publishing my Indigenous narrative.

Jelani Cobb, staff writer at The New Yorker and guest editor of the Columbia Journalism Review’s latest print issue, which focuses on race in journalism, questioned what else is lost with the media’s lopsided ethnic equation.

“How many people who have the skills to do this work never even get the opportunity to try?” Cobb wrote.

What stories and perspectives are missing in today’s newsfeeds? It’s for this reason I’ve felt compelled to risk potential discord with my pool of clients in self-publishing my Indigenous narrative, a stand I firmly believe is worth taking.

As in the story of Standing Rock—in which I self-financed my early reporting and filed my first dispatches for $50 a piece for National Native News, a desperate solution to national media’s initial ignoring of the situation—white editors dominated and later determined the narrative that was most comfortable and timely for them. My Indigenous version, then, is every bit as important in this realm.

The exercise to draft an author’s edition of my work is hardly an attempt to lambaste my client. To be sure, the alternative version incorporated changes I had previously discussed with my editors, ones they had rejected. My self-published approach, rather, is an earnest attempt to sequester the editorial gap involving stories about the places and people that I have always known—Indian Country, the very lands upon which this nation was founded, and yet today is often treated by the established press as the work of foreign correspondence.

I’ve posted three author’s editions so far, and they have helped me cope with a culture of colonized newsrooms—workplaces that have dictated entire chapters of my career, passed me over for promotions I felt I deserved, and doubted and dismissed my Indigenous knowledge more times than I can count.

This year marks two decades since I landed my first industry job as a cub reporter for a CBS News affiliate covering the Four Corners region in the southwest, the dusty crossroads where New Mexico, Arizona, Colorado and Utah intersect. Indigenously, the news region represents mostly Navajo and Ute Country as well as Jicarilla Apache homelands. Back then, few of my editorial managers categorized my coverage of these communities as “Native news.” My stories were simply seen as “news.”

It’s time that we get back to that.

Jenni Monet is an award-winning journalist writing about Indigenous rights and injustice. Her work is featured in such publications as the LA Times, The Guardian, The Center for Investigative Reporting and PBS NewsHour. She holds an MA in International Politics from Columbia Journalism School and is a tribal citizen of the Pueblo of Laguna. Her Indigenous versions of her work can be found on here.

On Black Millennials in Search of the New South

Did Diderot's Legacy Live Up To His Genius? 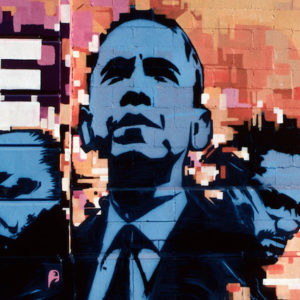 On Black Millennials in Search of the New South Over the last few years I’ve been trying to find the “New South” that young Black millennials like me are moving to. That...
© LitHub
Back to top
Loading Comments...