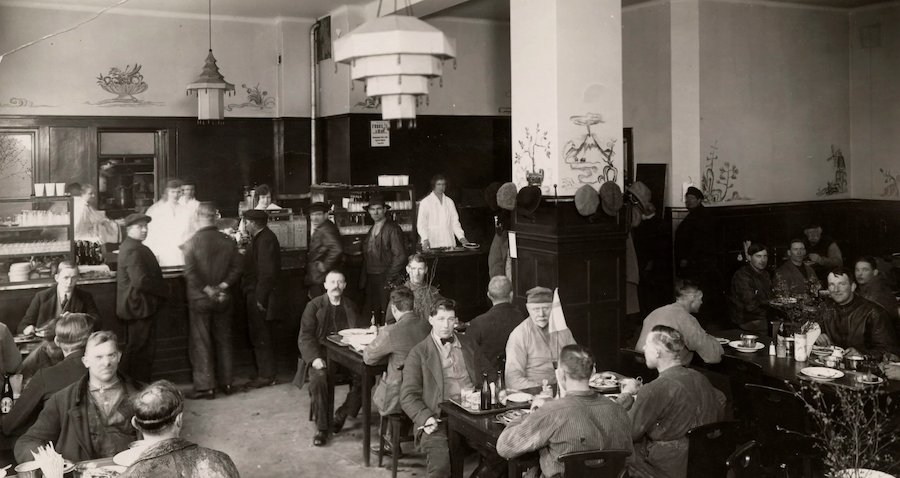 Why Did So Many Restaurants Stay Open During the 1918 Pandemic?

You’re living in a pandemic. Public health officials recommend new measures every few days: avoid crowds, open windows, wear a mask. Schools close, theaters go dark, even churches shut their doors. But at least the restaurants are open! The year is 1918—maybe not so much like 2020 after all.

For years, centuries even, we took restaurants for granted; it is news to most people that they had to be invented (I write about this history in my book The Invention of the Restaurant). As a child, it made sense to me that Eli Whitney invented the cotton gin and Alexander Graham Bell, the telephone—as we learned in school, “progress” meant currently familiar technologies had all started at some point in the past. Jonas Salk  created a polio vaccine. These people were all famous because they invented a new thing. But that social and cultural forms had a history, that not just individual eateries but the entire category of restaurants might be new at one point and non-existent at another? Go figure.

Now it appears that restaurants may not only have a start date, but an end date as well. Born of Enlightenment medical sensibility (the first restaurateurs sold restorative broths and marketed their products especially to people with “weak and delicate chests”), restaurants as we knew them just six months ago may well be a thing of the past—killed off, or at least radically altered, by the current pandemic.

For more than 200 years, restaurants have been public places where people go to be private: to sit at their own tables, have their own conversations, eat their own meals. But even that limited degree of interaction violates the social distancing guidelines widely in place today.

Operating in most cases with small profit margins—this month’s customers pay next month’s rent—few restaurants can afford two weeks (much less months) of forced closure. Estimates are that 75 percent of independently owned restaurants may never re-open. Without them, bakeries, specialty farmers, and wine distributors are likely to be in serious trouble as well.

While most authorities in the United States today agreed on restaurants closures as a vital public-health measure, their counterparts during the deadly 1918 influenza epidemic saw things differently. A hundred years ago, it seemed obvious that crowds would form along parade routes, in public parks, at revival or club meetings—but not in restaurants.

A century ago, where restaurants existed, they were crucial for feeding the many new citydwellers who lived in one-room studios or boarding houses.

In response to the so-called “Spanish Flu,” which spread rapidly and was as fatal for infants and healthy adults as it was for older people, many cities closed schools and churches. Minneapolis, Seattle, and other cities limited access to public streetcars. (Kansas City notoriously did not.)

At some point, most cities shut down obvious entertainment venues: theaters, dancehalls, poolhalls, moving-picture shows, and especially saloons. But restaurants rarely closed. In Cincinnati and other Midwestern cities with large German populations, authorities could find no easy way to differentiate between beerhalls and restaurants because all of the latter served beer. Both remained open.

There are far more restaurants now than there were in 1918. The National Restaurant Association counts roughly a million restaurants today, employing well over 15 million people. In contrast, in 1918, there may have been 100,000 restaurants. So while the population of the United States today is roughly three times what it was a century ago, we have ten times as many restaurants. If restaurants and their patrons were evenly distributed over time and space, restaurants should have been three times more crowded during the 1918 epidemic—when health authorities left them open—than they are today!

But, of course, restaurants and people have never been evenly distributed. Restaurants are largely urban and the United States has become far more urbanized over the last century. (In 1915, about half of all Americans lived in rural areas; today, it’s less than a fifth.) With city and suburban living, two-career couples, and a sharp decline in the teaching of Home Economics, American “foody” culture in recent decades has largely been nourished by restaurants, television programs, and specialty retailers.

Being a foody is as much a spectator sport—something done in front of screens or in dining rooms—as it is about knowing your way around a kitchen. At the same time, poor and underserved people living in our country’s many food deserts often have more access to fast food than to supermarkets.

Restaurant going has hence become a routine activity (be it for a breakfast egg sandwich, a take-out salad with breadsticks, or a prized reservation at some hard-to-book spot). In 2015, the Wall Street Journal reported that Americans spent more in restaurants than they did in grocery stores. That trend continued through 2019.

A century ago, where restaurants existed, they were crucial for feeding the many new citydwellers who lived in one-room studios or boarding houses; homeownership in 1918 was the exception, not the norm. Take-out as we know it today barely existed, since its popularity depends on people having comfortable homes or office desks where they can take their meals (or cars in which to eat them). “Eat Dinner at Home. The restaurants will be open but the city health authorities urge that only people who have no other way of getting their meals today, patronize them,” read the Miami Herald on October 13th, 1918.

Consider the case of Cleveland. In 1918, it was a major Great Lakes port and innovation center—an early home to the steel, automobile, and chemicals industries. With almost twice its current population, it was the sixth biggest city in the country. (Today, it’s fifty-third.) Recent German, Slovak, and Italian immigrants made up 30 percent of the population and nearly all of them worked in factories or performed manual labor. During the epidemic, authorities closed schools, museums, libraries, cabarets, bowling alleys, churches, “and all other places used for general meetings, public or private” but simply limited restaurants’ hours of business.

Yet by the second night of the curfew, even that proved inadequate. Nightshift workers, desperate for “midday” sustenance, had nowhere to go. Wandering through downtown Cleveland in increasingly large groups, they both violated the city’s prohibition on “public assemblages” and no doubt raised political tensions—a year earlier, the Socialist candidate for mayor had won more than a quarter of the votes. All-night restaurants re-opened to keep the social peace

When this is all over, the restaurants remaining seem likely to be at either end of the price and cultural-cachet spectrums.

One hundred years ago, it was Prohibition, not a pandemic, that changed the face of American restaurant culture. The saloons already shut as “places of entertainment” in 1918 nearly all closed permanently after the Eighteenth Amendment went into effect in 1920. In their place emerged lunch rooms, soda fountains, automats. Restaurants continued to provide sustenance for urban workers—much as major fast-food chains do today.

Historians know better than to predict the future, but we also know that periods of crisis often intensify ongoing trends. An industry survey conducted before the coronavirus outbreak indicated that “off-premise” service (drive-thru, takeout, delivery) accounted for 60 percent of all restaurant orders. Since the lockdowns, a few high profile restaurants have adapted to our changed reality with aplomb.

Elsewhere as well, success consists of celebrity chefs parlaying name recognition into a continued income stream. Dominique Crenn in San Francisco has closed her Atelier but offers “Crenn Kits” to go (managing to order one before they sell out is nearly as much of an accomplishment as reserving a table once was).

Wolfgang Puck already had outlets in more than 20 airport terminals; with that market in freefall, his Spago in Beverly Hills now advertises curbside to-go. All can be booked via Tock, the on-line restaurant “ticketing” system devised by Achatz’s business partner, Nick Kokonas.

When this is all over, the restaurants remaining seem likely to be at either end of the price and cultural-cachet spectrums. The very big chains, well capitalized and powerful enough to re-negotiate rents, will almost certainly survive. So too may the media chefs whose nationally famous names suffice to make their cuisine desirable. But we may have lost many, if not all, locally owned and individual establishments. Restaurants will have to be invented all over again. 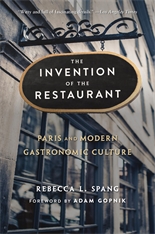 Rebecca Spang’s The Invention of the Restaurant is available now.

Rebecca L. Spang is Professor of History and Director of the Center for Eighteenth-Century Studies at Indiana University. She is the author of Stuff and Money in the Time of the French Revolution. Her latest, The Invention of the Restaurant is available now. 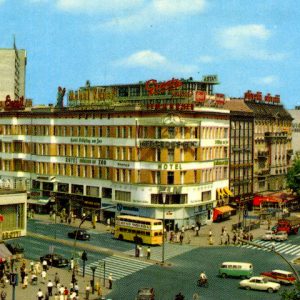 In my language, tongue means language. The tongue does not have bones: it twists in the direction we twist it in. I sat tongue...
© LitHub
Back to top
Loading Comments...