There is something solemn about mornings, when the world is quiet and the shop is calm. The books are illuminated by a dim natural light. When empty, the bookstore is filled with community, with our collective memory—with aspiration both communal and individual—and when full, the bookstore often maintains a quiet usually obtainable only in solitude. The arguments and enthusiasms contained in the volumes on the shelves create their own communion with the individual reader, while also providing a mechanism for discourse. It is a public square, no less articulate for most often being mute.

William James writes of “our mental life, like a bird’s life . . . made of an alternation of flights and perchings.” There is also a flight-and-perching rhythm to our balance of solitude and community. Our reflections in solitude and our engagement with community energize each other and propel insight forward. In book-filled rooms, solitude and community are simultaneously present.

The poet Charles Simic, at daybreak, after a night of “struggling to grasp the always elusive,” finds insight on the pages of Heidegger: “No thinker has ever entered into another thinker’s solitude.” And yet it is from this solitude that books are created and books are read; the book created by the solitary thinker allows us to enter their thoughts, as our reading in solitude invites us to think in communion.

We find further insight in Stevens’s poem where “the reader becomes the book”:

The house was quiet because it had to be.
The quiet was part of the meaning, part of the mind: The access of perfection to the page.
And the world was calm.

We enter a bookstore unsettled, hoping to settle something within us. The arguments across the shelves further unsettle us, but it is not an unpleasant stirring. As reading became his passion as a young man, Richard Wright’s books created moods in which he lived for days. We understand what Wright meant.

The bookseller, as they establish an ethos of service, understands that the disposition of the solitaire must be considered.

In the privacy of our own minds, when the external din is quieted, when the prevailing opinions and judgments (which resemble conscience, but function mostly as pernicious censors) are silenced, we discover our own voices. We bring these voices back to the public square that we might, in the words of a Seminary Co-op bookseller describing the ethos of the store, “trouble easy consensus.”

“The Seminary Co-op Bookstore,” writes the prolific author Cass Sunstein, “is not merely a bookstore. It is a community.” The sociologist Morris Janowitz, who helped finance the original Powell’s bookstore, “believed in bookstores because he believed in community, and bookstores built community.” Sunstein, on a similar tip, thought the Co-op “was analogous to a great city, as Jane Jacobs memorably described it: full of life-altering surprises and unknown treasures, and whenever you turned a corner, you never knew what you would see.”6 Sunstein and Janowitz both understood that a good bookstore reflects its community, but an exceptional bookstore both reflects and creates its community.

Jamie Kalven, the first-born son of the legal scholar Harry Kalven Jr., joined the Co-op in 1978. In the late 1980s, wanting to document the creation of his community, Kalven began work on a book that, in depicting a community “by way of the bookstore,” would provide “a portrait of a village of readers.” Kalven profiled a vast cross-section of the store’s customers, including those he described as children just learning to read, exiled intellectuals, adult illiterates, great scholars at the frontier of their field, celebrated writers, and passionate readers of all ages and backgrounds. He was convinced that a key to understanding a community—in this case, his community on the South Side of Chicago—was understanding the citizens of the bookstore.

While this might seem like a disparate group, they are all a certain type of intellectual ambler: their thoughts roam while browsing; carried through the store by their shuffling feet, they scan the shelves in some sort of focused meditation. They recognize each other as they gather books they have never heard of and would have never imagined they wanted if they had heard of them. They surprise themselves in realizing this was just the sort of book they were hoping to find. “Something there is in the float of the sight of things,” as Whitman says, “that provokes it out of the soul.” And these amblers trust the intuitions that arise while wandering the stacks.

It is perhaps this class of reader that one of our longtime members, a professor of history at the University of Oklahoma, had in mind when he told me that the Co-op allows him to see and to keep a piece of the truly beautiful, offering thanks from “the quiet, bookish thousands.” “It’s a lonely world out here.” He signed off, “On to haying.”

Lest booksellers forget whom they serve, the prevailing model of exceptional customer service in American retail—knowledgeable, solicitous, effervescent, a bit breathless in a desire to serve, dignified and measured in expressing gratitude for the customers’ decision to support this business over another—while often preferable to its smug, enervated, or dour alternatives, and more than occasionally a palpable good in itself, must be adapted for bookstores. To operate a good bookstore, the bookseller, as they establish an ethos of service, understands that the disposition of the solitaire must be considered.

“Often the most important books are shy, and do not press forward to the front counters.”

We are aware that some of our customers might want help or a kindly greeting from a bookseller, but just as many will insist on a certain decorum whereby we disturb the bookstore code of silence only after an invite from the patron. While those who need help deserve the same swift, knowing, and affable engagement they might expect to receive across any other service counter—say, at a hardware store—the bookseller must recognize that it is the company of books, more than the company of booksellers, that brings readers into the shop, at least at first.

“The Co-op staff understands what a serious activity browsing is,” Kalven observes. “It seems to be an unspoken principle that customers carry into the store the privacy that encloses the act of reading. The staff stands ready to help, but they do not bear down on you.” It is a space, he continues, “at once utterly private and convivial.” Even dear friends spying each other across the store feel that a greeting would be an intrusion—it can wait, they tell themselves, for a less private setting.

This is how the browser recognizes their book: privately, usually in silence, “for often the most important books are shy, and do not press forward to the front counters,” as Morley observes. We must maintain quiet and allow for concentrated browsing, understanding that our role is drawing readers across the threshold, that they might confront these volumes. If, after all, shades are to be dislodged, the tactics used to sell everything from mattresses to vitamins to pickaxes might not be the tactic best deployed in the stacks. 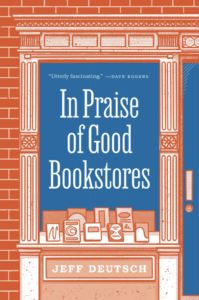 Excerpted from IN PRAISE OF GOOD BOOKSTORES 2022 by Jeff Deutsch. Reprinted by permission of Princeton University Press.

Jeff Deutsch is the director of Chicago’s Seminary Co-op Bookstores, which in 2019 he helped incorporate as the first not-for-profit bookstore whose mission is bookselling. He lives in Chicago.

Samantha Hunt on the Wild Delirium of Loving Language 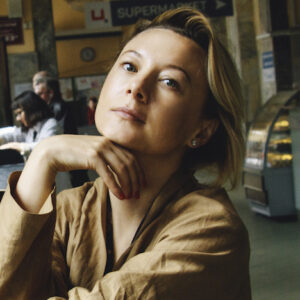 My first encounter with Valzhyna Mort’s work was Collected Body, her second book of poems released in America, which I picked...
© LitHub
Back to top
Loading Comments...