Who is Fire Island for? On the Currency of Reading (and Six Packs) in Pines Society

“What kind of gay person goes on vacation to do homework?” asks a character in the new comedy film Fire Island (Hulu), directed by Andrew Ahn and written by comedian Joel Kim Booster. The question is asked, somewhat incredulously, upon seeing Noah (Kim Booster) reading a book by the pool of the beach house where he and his friends are staying in Fire Island Pines. One of two predominantly queer communities on Fire Island—a long, thin spit of land off the Long Island coast—the Pines is traditionally known more for its gay beach parties and daily “tea” dance than for its intellectual offerings.

The man who makes this point, hailing from a much larger and more expensive house, is at a loss as to why anyone would come to Fire Island to read, a sentiment that can be easily attributed to his own snobbery. But the movie, which wears its literary debt on it sleeve, with a plot loosely modeled on Jane Austen’s Pride and Prejudice, also asks its audience to take seriously the terms of this question. What is at stake is the “kind of” person Fire Island is supposedly for.

This mismatch between Fire Island and reading, less a truth universally acknowledged than a joke with some basis in truth, has had a curiously long tenure, which is all the more surprising given the island’s rich literary history. W.H. Auden’s 1948 poem “Pleasure Island,” written about the neighboring queer community of Cherry Grove, where he owned a house with friends for some years, depicts an unsuspecting writer whose best intentions are thwarted by the island’s carnal offerings. (A surrogate, presumably, for the poet himself.)

This naive visitor may step off the ferry and onto the island, “intending to make its quiet / Emptiness his ally” in productivity. He may be seen, at first, “improving his mind / On the beach with a book.” But before long, he “lets his book drop,” and joins the other onlookers watching the shoreline pageant of “bosom, backside, crotch.”

This mismatch between Fire Island and reading has had a curiously long tenure, which is all the more surprising given the island’s rich literary history.

The prizing of body over intellect was only seen to intensify during the sexual and cultural boom of the gay liberation years. Having the right body, Andrew Holleran notes in an essay about the 1970s (The Gay & Lesbian Review Worldwide), had become “crucial”; while at college he would have pondered the meanings of a Henry James novel, now he found himself “wondering how to combine brewers” yeast with my morning milkshake, because I needed the extra protein for the body-building I was doing at the gym.”

In Holleran’s classic 1978 novel, Dancer from the Dance, where much of the action takes place in the Pines, the witty queen Sutherland notes how “in the Hamptons, the homosexuals tended to be fatter, older and attired in pastel-coloured slacks, but they could at least discuss […] Samuel Beckett or the latest novel of Iris Murdoch.”

Fire Island works to somewhat subvert this trope, insofar as Noah and his love interest Will (played by Conrad Ricamora) have both six-packs and literary appetites. Their desire (and capacity) to discuss books sets them apart from other characters. It’s during a heated discussion about their interpretations of Alice Munro’s story “Power,” from her 2004 collection Runaway (the book that Noah reads by the pool), that their initial attraction becomes most evident, even if it’s laden with tension and snap judgments, reminiscent of the initially thorny dynamic between Austen’s Elizabeth Bennet and Mr. Darcy.

The prizing of body over intellect was only seen to intensify during the sexual and cultural boom of the gay liberation years.

In an essay about reading Pride and Prejudice on Fire Island, Kim Booster remembers noting the numerous parallels between the social hierarchies depicted in the novel and those of the island, where wealthy “executive daddies and Ivy-League, startup proto-bros” would mix with unsalaried freelancers and “queer boys straddling the (incredibly skewed) Brooklyn poverty line, trying to live out a lavish vacation-fantasy on the cheap.” Staying in one of “few places where the economic divides within the gay community are so plainly seen,” Kim Booster couldn’t help but map the experiences of Austen’s characters, “navigating the limiting social conventions” of England during the Regency onto the “similarly tortured social conventions of gay male spaces.”

Instead of “a dance at Netherfield,” it was a “pool party on Ocean Walk.” It is tantalizing to read other Pines rituals too, like the tea dance, through the lens of past societies. In his memoir City Boy, Edmund White notes about writing his debut novel, the allegorical Forgetting Elena, that the “rituals of gay men” on Fire Island in the late 1960s and early 1970s “rhymed in my imagination with the rituals of medieval Japan or Versailles.”

That Fire Island is not a “straight” retelling of Austen’s novel is announced in the opening scene. Quoting the well-known opening sentence of Pride and Prejudice, Noah reflects on how this focus on fortune and marriage “sounds like some hetero nonsense,” as he rushes to pack his weekend bag for Fire Island and brusquely ushers out a one night stand from his bed, for fear he has “boyfriend energy.” Not every single man is looking for a wife, he notes, and the film’s happily ever after remains no less cool towards monogamy as its own end goal.

Books can be status symbols, like many variables in Pines society, even if cultural capital seems to be valued less highly there than looks or money.

But Austen is still, for Noah, “the queen,” a homage that speaks to a longer tradition of gay male affinities with her work, as compellingly identified by D.A. Miller in his 2003 book Jane Austen, or, the Secret of Style. Indeed, the gay love of Austen is a gag in itself, as Miller shows when he unpacks a line from theorist Leo Bersani about going home with a “butch number” from the bar, only to find that he has the collected Austen on his bookshelf, all but confirming his sexual position. That Jane Austen is a central source of inspiration for a film that has Erin, the host and house mother played by Margaret Cho, at one point shout “I SMELL BOTTOMS,” feels apt in this light.

In that opening scene of hasty packing, Noah grabs the offending copy of Munro’s Runaway from a pile of books; underneath it is Pride and Prejudice and Jeremy Atherton Lin’s recent Gay Bar, flanked by Yann Martel’s Life of Pi to the left and a local history of Fire Island to the right. Relatable for anyone who’s left decisions about their vacation reading to the last minute, this neat visual reading list also announces the film’s literary intentions, and its depiction of reading as its own kind of currency.

It recalls, in the first instance, Kim Booster’s own memory of how he came to take Austen to Fire Island, having “pluck[ed] a copy of Pride and Prejudice off my shelf (purchased to display in my Brooklyn apartment to convince Grindr hook-ups that I could fuck and think).” Books can be status symbols, like many variables in Pines society, even if cultural capital seems to be valued less highly there than looks or money. Attributes like “talent and intelligence,” things that seem “enticing in the city,” writes Ethan Mordden, in an Austenesque short story from his Buddies cycle, can be “internal contradictions in a place without an opera house or a library.”

But in spite of the tropes that portray this anti-intellectual streak, Fire Island is a deeply cultured place, visited by numerous artists, writers, and creatives, and home to annual artist residencies. Kim Booster’s film is a love letter to queer friendship and unexpected romance, captured in the messy dramas that unfold during a Fire Island summer. But nestled in there, too, is a tribute to the “homework” of reading as its own mode of connection, not only as a love that may bring two people together, but as a way of thinking and engaging critically with the world around you. As if by tuning out we might find another way in, illuminating the present through the literary past.

Jack Parlett is a writer, poet and scholar. He is the author of The Poetics of Cruising: Queer Visual Culture from Whitman to Grindr, published by the University of Minnesota Press, and Same Blue, Different You, a chapbook. His essays have appeared in the New Yorker, Boston Review, Poetry London, Lit Hub and elsewhere. His new book Fire Island is out now with Hanover Square Press.

Calculating Losses: How to Close a High School Library for Summer Vacation 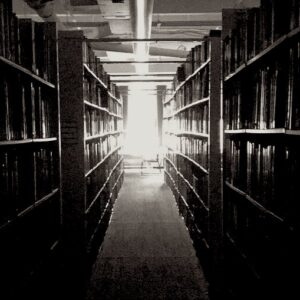 Calculating Losses: How to Close a High School Library for Summer Vacation

1. Walk through the empty, echoing hallways with hunter green locker doors hanging open like weary wings. Find one solitary...
© LitHub
Back to top