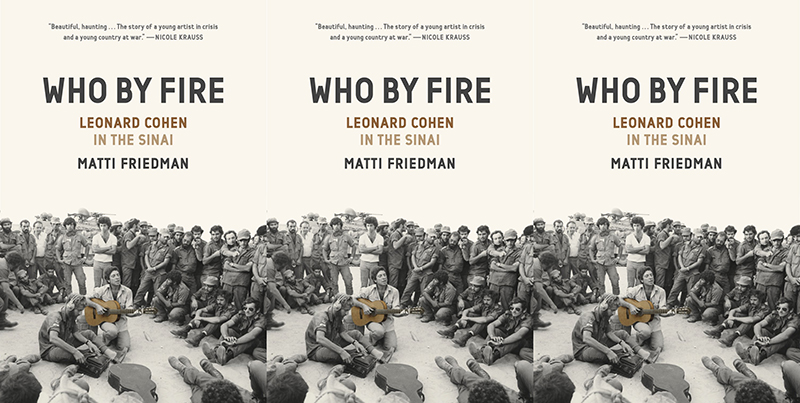 Win a Copy of Who By Fire: Leonard Cohen in the Sinai by Matti Friedman!

The little-known story of Leonard Cohen’s concert tour to the front lines of the Yom Kippur War, including never-before-seen selections from an unfinished manuscript by Cohen and rare photographs.

In October 1973, the poet and singer Leonard Cohen—thirty-nine years old, famous, unhappy, and at a creative dead end—traveled from his home on the Greek island of Hydra to the chaos and bloodshed of the Sinai desert when Egypt attacked Israel on the Jewish high holiday of Yom Kippur. Moving around the front with a guitar and a group of local musicians, Cohen met hundreds of young soldiers, men and women at the worst moment of their lives. Those who survived never forgot the experience. And the war transformed Cohen. He had announced that he was abandoning his music career, but he instead returned to Hydra and to his family, had a second child, and released one of the best albums of his career. In Who by Fire, journalist Matti Friedman gives us a riveting account of those weeks in the Sinai, drawing on Cohen’s previously unpublished writing and original reporting to create a kaleidoscopic depiction of a harrowing, formative moment for both a young country at war and a singer at a crossroads.

We’re giving away 5 copies of the book, courtesy of Ingram and Spiegel & Grau.