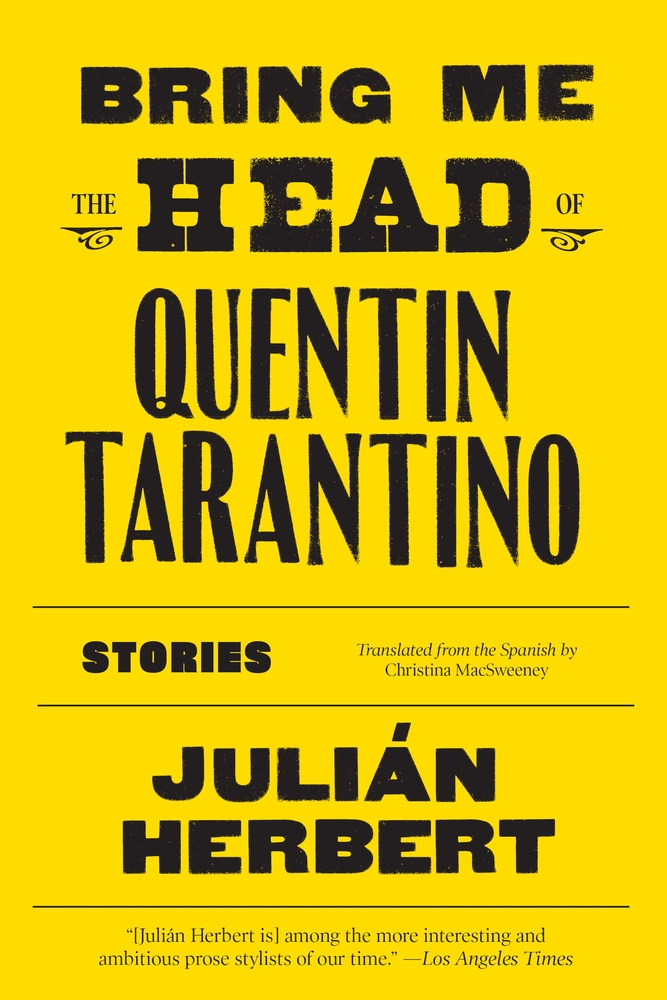 The following is a short story excerpted from Julián Herbert's latest collection, Bring Me the Head of Quentin Tarantino, which features vivid narratives of people who struggle to retain a measure of sanity in an insane world. Herbert was born in Acapulco in 1971. He is a writer, musician, and teacher, and is the author of The House of the Pain of Others and Tomb Song, as well as several volumes of poetry and two story collections. He lives in Saltillo, Mexico.

1
They brought us here with the promise that we’d get some hands-on experience. Our specialty is crime scene analysis. This particular scene has become a labyrinth. The house had been purified. Instead of the usual red spatter patterns there are white stains on all the walls. A pale powder covers the furniture and the fixtures in the bathroom and kitchen. It’s as if a whole family had been massacred in a tub of whitewash. We don’t know who we are, what authority we have to be here, or when our task will be completed. We don’t even know one another. Our only credential is a vaguely scientific attitude as we take detailed photographs of a corner of a room or gather evidence in a bedroom and our shoulders happen to touch; nothing else unites us. In contrast to the flush of dawn on the outer edges of the investigation, our identities are obscure. And what’s more, we’re hemmed in by music that prevents us from going outdoors, even to the garden. To figure out where the music is coming from, and so to hide from it, we have to peek through the lace curtains. Some of us doubt that those things covering the windows are really lace curtains. They say that the curtains are evidence: one more white spatter pattern that bleeds into everything. Others think we are ghosts: murder victims eternally trapped in the private residence of our extinction. Yet others doubt if it’s that simple: it would be easier if we were just ghosts rather than witnesses for the prosecution. That way we wouldn’t have to sleep in a huddle on the floor each night or perform juggling tricks to safeguard the disgusting evidence on the walls. We wouldn’t have to suffer hunger, thirst, or drowsiness. We wouldn’t sweat or smell so bad. We wouldn’t have to degrade our evenings filling in form after form in minute writing. The one indication that we might be dead is our recognition that we are on the verge of insanity: madness is the nearest thing to being a ghost.

2
The music hates us. It reinvents itself every day. It’s fast and it throbs in the trees. We have no idea how big the garden is, which is why we don’t dare venture across it: what if the music were to catch up with us and slice us in two before we reached the street? If it was at least monotonous, we’d have gotten the better of it by now. But it isn’t. At times it sounds like a military drum or a tabla flooding bedrooms and bathrooms with its needles of fine rain. At other times it’s exactly like the scratching of a fountain pen amplified five hundredfold, a stylus generating notes as it draws the grooves of our brains on scraps of paper. On yet other occasions it is a string of keys hanging menacingly from the branches. A small forest of lynched pianos. If it was possible to hear just one of those pianos at a time, we’d be able to enjoy it, even knowing that it was a corpse. But hearing them in unison is like sinking into quicksand made of air.

3
Someone is contaminating the evidence. There’s no other explanation. We’ve spent too long (it could be hours or days) inhabiting the object of our scientific methods. Extraneous contact degrades any form of control. Our footprints or the fingerprints we leave on the bannister must be clearly differentiated from the marks left by the original residents of this house. Logic is not sufficient to avoid confusing our own frustration and angst with the victims’: we need something else. It’s an exhausting intellectual exercise. We’re only human: from time to time we amuse ourselves with vain pastimes. The other day, in the garbage (despite having been purified by white spatter patterns, the house is still a monumental trash heap), we found a cardboard box containing hundreds of transparent spinning tops. We guessed that the collection had belonged to a child (possibly dead; a child who was killed within these very walls). We put aside the tweezers, cameras, and precision rulers to sit on the floor and spin tops. We watched them dance under the light of our flashlights, placed bets, and held tournaments until the room was, in forensic terms, a dunghill.

The music hates us. It reinvents itself every day. It’s fast and it throbs in the trees.

Some of the investigators have tried snorting or smoking the white powder covering the kitchen furniture. They grind the substance finely with a teaspoon or dice it with a credit card, form it into icy lines on the tabletop or the stove, inhale it through rolled bills . . . they say it helps them bear the suffocation of our interminably long working days. We don’t believe them. We’ve even wondered if they are infiltrators: murderers who have come among us with the mission of draining the syntax of this crime scene. As a powder, the white spatter loses its maplike dimension. It no longer tells us a story, and becomes an unstable, volatile flow: something capable of penetrating our bodies. An entity with a terrifying similarity to the music.

4
An elderly man was walking in the garden. Someone said he must be one of us: one of us who had evolved into a state where his only option was to defy the music. No: scientists of that age and demeanor don’t do fieldwork; they stay safe in their offices while we, the youngest and least skilled, are sent to lay claim to the evidence that they later use to display their minor genius. So, no, that’s not it.

The elderly man made his way through the palm trees and other flora with inhuman grace, as if rather than walking he was circling above the ground to the sound of the music— which at that moment was particularly awful: the constant tone of a busy telephone line with groaning in the background and superimposed explosions. And, incredibly, he was smiling; his wrinkled visage was like those faces children make by pulling down the corners of their eyes with their fingertips and lifting their cheeks with the palms of their hands. Still rotating on his axis, his arms open wide, he was smiling when a branch suddenly broke off from the trunk of a tree and, with the precision of an industrial blade, sliced him in two. There was no blood: just pieces of skin and viscera that, in the asepsis of distance, gleamed like latex.

Someone pointed out that it was our duty as medical forensic assistants to go out into the garden, gather the remains of the body, and add that scene to the remit of the one we’d been assigned to investigate. Someone else laughed aloud. The rest of us moved away from the windows and returned to our spinning-top tournament in another room.

5
We decided by unanimous vote to dismantle this crime scene until not a single brick was left standing. It’s a procedure with no juridical basis but infused with perfect logic: destroying the residence is the only viable strategy for halting the degradation of its evidence. Lacking a preconceived plan, we simply exploited the situation as we found it: we snorted the powder in the kitchen, scarred the floors with spinning-top tournaments, devoured the whitewash on the walls . . . Until one of us realized what was happening and said: We’re bona fide science students; we need to design a project. After that we drew diagrams, handed out hammers, chisels, and tweezers.

Someone said he must be one of us: one of us who had evolved into a state where his only option was to defy the music.

It’s going to be an arduous process. It might take us the rest of our lives or what remains of our working day. It’s an aggressive plan but destruction has its own music. Soon we’ll be free: when the walls fall and the ceilings of the crime scene we’re investigating finally give way and descend on our heads. We’re ashamed to admit it, but we’re content: our science is beginning to evolve into a religion.

Here are the winners of the 2020 World Fantasy Awards. 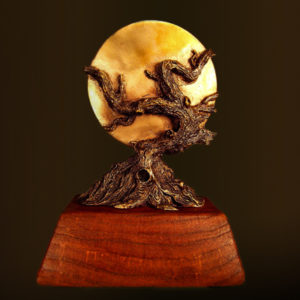