When Will Ben Lerner Admit He’s a Novelist?

The Topeka School as Gateway Book

In 2012, a colleague and I decided to curate an interview series for the website where we then worked; we boldly and cleverly titled said series The Future of American Fiction. Yes, imagine it in (internet) lights. Per the title, we asked a handful of young and formally or thematically interesting novelists if they’d answer some questions about the state and future of fiction. It being 2012, there was one very exciting young novelist we were particularly hoping to land: Ben Lerner, whose Leaving the Atocha Station had been a surprise hit the previous autumn.

At first, Lerner politely demurred, citing that he was over-interviewed (valid) and, well, not really a novelist, or at least not really qualified to speak on the topic we’d so grandly set. And while he did eventually agree to be interviewed, and while this story may be all via my colleague and therefore technically hearsay—ah, the post-truth book review—to me this is evidence of something essential to the extant work of Ben Lerner: he doesn’t really think of himself as a novelist. I mean, by now he must know he is. But it has always seemed, in both interviews and in his actual work, that he more or less considers himself to be a dedicated poet who accidentally wrote a couple of novels. The fact that he’s now one of the pillars of autofiction only makes sense—autofiction being the most instinctually available prose form for accidental novelists.

That said, Leaving the Atocha Station is a fairly straightforward novel on the surface—man, abroad!—though only on the surface; I remember loving the novel when it came out and not being able to really describe why, because everything I tried sounded annoying. “American poet in Madrid sleeps with people or doesn’t and thinks about it too hard;” “Book that questions the nature of poetry and art and existence,” etc. Still, it’s short and ruminative, and you can easily imagine it beginning as a diary entry or a letter to a friend; it seems like the kind of novel you could fall into writing. It was generally acknowledged to be semi-autobiographical, but this was before “autofiction” became the over-discussed literary genre that it is today.

Rereading Lerner’s debut in 2019, I have to admit I love it a little less. I’m still dazzled by Lerner’s intelligence, still moved by his exploration of the intersections of art and life, still charmed by his prose, which is sometimes acrobatic, sometimes shockingly plain. (This description, by the way, covers all three books, including The Topeka School.) But there’s something less interesting (and less funny) these days about a young, self-obsessed white man wandering around thinking about whether women want to have sex with him and self-flagellating and self-congratulating in equal measure—a fact that does not seem lost on Lerner, considering the content and stylistic choices of The Topeka School. (More on this later.)

10:04, Lerner’s second novel, explicitly grapples with his novelistic intention, or lack thereof—it opens with the narrator (“Ben”) eating octopus with his agent, after having sold a second novel (read: 10:04) based on a story that had appeared in The New Yorker (read: “The Golden Vanity”) for a “strong six figures” (read: probably between $500 and $600k, based on his calculation, later in the book, that his take-home pay would be about $270k). If you’re the kind of reader who loves metafiction and formal play, this novel is thrilling. (If you’re not, well, you’re not, and you’re probably not reading this essay anyway.) The book repeatedly points out its own artifice, its own book-ness, and lets you in on the secrets of its own formation, and the author’s anxiety thereof. Or, maybe not! Maybe it’s all just invented. Either way, it doesn’t seem like the project of a capital-n Novelist: it seems like the project of a poet who was bribed into writing a novel. Which, by all accounts, it is.

Is it still autofiction if you’re inhabiting voices other than your own?

But now, Lerner seems to be accepting the mantle that we’ve all been draping over him for years: The Topeka School is by far the most traditionally novelistic of the three, though it still hews somewhat to the more experimental autofictional style. Both Leaving the Atocha Station and 10:04 are told in the first person. In The Topeka School, Lerner takes a step back, cycling between three perspectives in third person: that of Adam Gordon (that same guy from his debut), and each of his parents, who closely resemble Lerner’s parents. The sections about his mother, Jane, are particularly good—in fact these are the best parts of the book, written as if told directly to Adam (“I bet you won’t put this in your novel,” she says, before an embarrassing gum-related anecdote); the sections about his father, Jonathan, are also fantastic; Adam himself becomes the least interesting character of the three. There’s also a fourth point-of-view character, Darren, a classmate of Adam’s with an unnamed developmental disability whose story acts as a kind of frame for the rest, appearing in short italic bursts before each section.

The Topeka School begs the question: is it still autofiction if you are inhabiting voices other than your own? But wait, what if they’re your parents (parents being about as close to the self as one can get in another person)?

My answer would be yes—but barely. Which is why The Topeka School feels like such an in-between book: a bridge from one phase of Lerner’s career to the next.

The very first scene in The Topeka School (also published in The New Yorker, by the way) speaks to what I can’t help but interpret as Lerner’s growing anxiety about continually talking about himself. Adam has been confessing his feelings to his girlfriend Amber while they drift in a boat on the lake in her subdivision—”for a long time he had been speaking”—when he looks up to find that she’s gone, slipped away without his noticing. When he finds her again, she tells him a story about doing the same thing to her stepfather, angrily ranting about China at the dinner table. “It would take Adam twenty years to grasp the analogy between her slipping from the chair and from the boat,” Lerner tells us.

The novel, which is about language in many ways, repeatedly returns to this anxiety about expression, or over-expression, and Lerner’s not wrong to engage with this. Mansplaining, etc.

But he doesn’t entirely escape his own trap. My biggest qualm about The Topeka School is the moment when Lerner reverts to that habitual first person—he waits until the very last section to do so, and despite the fact that we’ve been receiving narratorial hints and winks about the current state of politics throughout, it feels surprising and tacked-on. The section is a first-person account of “Adam” and his family at an ICE protest—and it reads like a performance, something akin to the virtue signaling you see all the time on Twitter: Lerner reassuring us that his politics are good, that he sees what’s going on and he condemns it. It feels like something Lerner couldn’t resist—but should have. I understand: it’s hard to create art in the midst of history like this. But I can’t help it: even the specter of Trump in contemporary fiction makes my eyes glaze over; it makes it seem less, not more, immediate and necessary. I don’t exactly know why that is, except maybe that we are so inundated already; maybe the glazing is a physical process of self-preservation. Rumaan Alam read my mind at the moment when I found out that Darren grows up to be a Trump supporter, writing in his review of the novel for The New Republic: “Do we now need to add literary fiction to the long list of things Donald Trump has ruined?” Let’s not, please; it’s just too on the nose.

That said, it’s not like Lerner’s alone. I heard from one literary agent that after Trump’s election, everybody wanted their drafts back; they needed to revise. Some things just didn’t seem important anymore; other things seemed suddenly, massively important. Another writer friend admitted to me that he added a bunch of references to Trump into his own (fairly autofictional) novel at the last minute; his agent made him take them out. They didn’t make the book better.

I heard from one literary agent that after Trump’s election, everybody wanted their drafts back; they needed to revise.

And that’s the issue—this last section doesn’t make The Topeka School better. For me, the inclusion of this section, and the frequent dropped-in references to the state of contemporary politics in the rest of the novel, reflects the same sort of anxiety we see in Lerner’s characters: they’re essentially self-centered and inward-looking, but too smart not to worry about their own myopia, or the appearance thereof. Clearly, The Topeka School came out of Lerner’s ruminations about toxic masculinity (and his, or “Adam’s” relative lack thereof—did you know he’s absolutely gangbusters at cunnilingus?) But in the end, the use of Trump, and of MAGA hats, and of ICE protests just feels like a hedge, a shield against any accusations of navel-gazing while the world burns.

It’s odd, because autofiction should be the perfect place for grappling with real-life events—after all, it’s the closest to nonfiction that fiction gets. But personally, I’d rather that the world kept its burning off my literature. And for me, something about the necessary interiority of autofiction—the emphasis on the single person, the ultimate reliance on authorial quality of mind for success or failure—clashes with larger social critique or even commentary. It’s too personal a form to tackle something so huge. (And for the record, this clash isn’t specific to autofiction—I loved every moment of Ottessa Moshfegh’s deeply interior A Year of Rest and Relaxation, but wanted to rip out and burn the last page, where she reveals it’s all been leading up to 9/11.)

But in the end, I can mostly forget about that last section—and the strange move that is the Darren frame, and the fact that the developmentally disabled character in the book becomes a Trump supporter, which has somewhat icky connotations. I can forget these things because they feel like growing pains.

Don’t get me wrong: I think Ben Lerner’s prose—and mind—is already among the most exciting in contemporary literature. (When I say “growing pains,” I don’t mean that he’s growing up, just out.) I’m perfectly aware of the arrogance and futility of asking a work of art to be something it isn’t (or asking an artist to do something they may or may not actually want to do). But I think it’s time for Ben Lerner to stop writing about Ben Lerner, and I think even Ben Lerner wants this. It’s obvious: The Topeka School pushes at the boundary of autofiction while making the most traditionally novelistic moves of all his work. It is, aside from the Trump stuff, wonderful—but it feels essentially transitional.

Maybe it’s just that I am a little tired of autofiction as it exists; but it seems as though Lerner is too, considering the external perspectives he’s gathered to support it. To include in autofiction your parents’ voices is a step indeed, but it feels like it’s a step that brings us so far around the other side that we’re nearing “regular” fiction again. The Topeka School is a very good novel—but I think the next novel will be better. 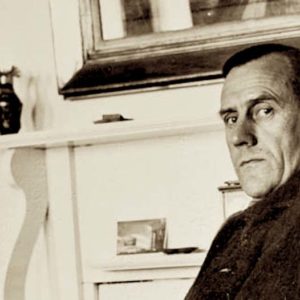 When I was 22 I was in love with a man who had a framed photograph of Patrick White hanging above his bed. I had grown up with...
© LitHub
Back to top