Confronting the Loss of Selfhood in the Face of MS

My mother used to bring old x-rays home from work. They unnerved me, those white blotches, blossoming across a surface like oil, seeming closer to the magic of the fantasy books I devoured than the realms of science. These feelings would vanish, however, when the games began; setting them on the floor, Mum would shout “heart!”, “liver!”, “stomach!”, and my brother and I would have to jump to the right x-ray and balance, giggling. Among our teddies, we had a chest cavity doll, into which we could plug smooth plastic organs, their shape and feel similar to the foods of my play kitchen. On weekends, she’d snuggle us as we watched a cartoon about anthropomorphized red blood cells journeying through the body. In these ways, I grew up thinking of the inner workings of humans as familiar, controllable and smiling.

Or, most of the time. Visiting Mum at work was disquieting. In the disjointed behavior of her patients lurked the same uncanniness of the x-rays. My mother, a geriatric psychiatrist, believed that it would only take enough ingenuity to chemically fix their frayed minds. I wasn’t so sure. Such people seemed crystallized. The question of who they had been never even occurred to me; they just were, inherently and eternally apart. Had I been told then that my mother was soon to become one of them, I never would have believed it.

What makes up a self? A person? My Catholic school proclaimed loudly that “a person is a soul: the soul is immutable, eternal and disembodied.” To question such truths was madness. So it was only when I started to study philosophy that I began to realize this “self-evidence” has more to do with its long history than incontestable fact.

The idea finds its first most prominent iteration in Plato and has been influential in every era since. In Medieval philosophy, it can be seen most strikingly in Avicenna’s “Floating Man” thought experiment, which asks the reader to imagine being suspended from all sensory contact with their own body. In this case, Avicenna argues, the reader would still have self-consciousness, meaning that the body cannot be essential to it.

Faced with death, disease or incarceration it is only natural to try to maintaining the integrity of the self by dissociating it from the body.

It is perhaps not inconsequential that Avicenna wrote his line of argument while incarcerated in a castle. Nor is it coincidental that Descartes refined the concept for the Enlightenment when haunted by illness. Faced with death, disease or incarceration it is only natural to try to maintain the integrity of the self by dissociating it from the body. And I would have loved to do the same in light of my mother’s illness, if only it weren’t so obvious that the disintegration of her body was resulting in the dissolution of her.

I was nine when my mother told my brother and me that she had MS—Multiple Sclerosis. She explained patiently that it was destroying the “fatty sheaths” around her nerves, disrupting the communication of her nervous system. I was not to be overly concerned, however; the symptoms of MS depend entirely on which nerves it attacks and very often will, at most, put a person in a wheelchair after decades. She failed to mention that in other cases, it takes everything.

We were unlucky. The next few years saw her progress from walking stick to wheelchair to near paralysis, but even these symptoms were nothing on the disintegration of her mind.

None of us wanted to admit it and so lapses were, at first, overlooked, such as the time she encouraged my brother and me to use a spray bottle of cleaner like a water-pistol to make chores more exciting. Dad rushed us under the shower when he found us; she’d failed to notice that the solution contained bleach. Then there was the time she ordered biscuits for her colleagues. One hundred tins. All chocolate chip. She didn’t last as a doctor much longer and returned home, defeated.

Retirement was tragic but necessary. Small mistakes can be lethal as a doctor and she was swiftly losing all discretion. When I admitted that I found one of her carers awkward, she told them that I hated them and to stay away from me. I was too young to understand that this was the MS speaking and never trusted her again.

Though, as immature as it was, wasn’t something of my thinking correct? MS was not a parasite, or even a cancer, secreted inside of her; it was a happening that was of her and no scalpel could draw a clear distinction between the two.

People often talk of life-changing books, but only one can claim that title for me: The Man Who Mistook his Wife for a Hat by Oliver Sacks. In it, I found painstaking portraits of people shattered by faulty neural wiring, but people nevertheless, bound up in the full and furious art of living. Sack’s works are psychological, philosophical and, undeniably, literary, and in them I found, at last, a reflection of my beautiful, broken mother.

One might imagine that Sacks, a neurologist, would equate the self with the brain, yet his own experiences wouldn’t allow such a reduction. He writes of a severe leg injury from a climbing expedition, “as a breakdown of memory, of thinking, of will—not just a lesion in my muscle, but a lesion in me.”

I had observed similar lesions in my mother. Her self atrophied not only through her nerves but the contraction of her mobility, which limited what she could do and be in a radical fashion. In a progressive disease of incremental changes, the point at which she was no longer allowed to work was a marked change. Trapped at home with its limited stimulation and diminished social connections, her once keen doctor’s intellect collapsed completely.

She would adopt the beliefs of the last person who had talked to her and when her carers began dolling her up in pink and pigtails, no case could be leveled at them for dressing her out of character; she was whomever you made of her. She was losing the plot of her own autobiography.

No surprise then that she sought solace in literature and would lose weeks listening to audio-books. Thanks to them, though trapped both in the house and her own flesh, in her last years she lived adventures as improbable as riding with pirates and a Roman legion. Such delusions weren’t always pleasant. One time she dissolved in tears, sure that she had stolen monkeys from the Berlin zoo in a mad moment.

The humanities were also Sacks’s palliative when recovering from his leg injury. “Faced with a reality, which reason could not solve,” he writes, “I turned to art.” He believed the nervous system and body to be “the first definers of ego or self,” given meaning by one’s personal narrative. This philosophy shines through his books, which work to respect the person by returning storytelling to medicine.

My own path followed a similar trajectory. After following Sacks’s thinking to studies in psychology and philosophy, I turned to fiction, where the self is not only interrogated, but can speak and heal.

My mother died five years ago, or, rather, died for the last time. She’d been dying, piecemeal, over the span of a decade, though the changes were too incremental to map. There had been the well mother and the one dismantled by disease, but how many had there been in between?

Perhaps the same question could be leveled at all of us. None of our family survived her illness unchanged and the carefree child I once was seems closer to a previous incarnation than a younger self. To be a person is to change and perhaps it is more truthful to think of a person bearing numerous fractured selves in a lifetime, with as many births and deaths.

So are we neurons? Bodies? Stories? Spirits? All of the above? Or none? Any answer strikes me as insufficient. It is more revealing to question, and there is no more fitting landscape for this than literature. My life’s work is scribbling around my mother’s contours, a police sketch of the fractured human self I glimpsed through her disease. At its best, my writing is an x-ray of it; black blotches, blossoming across a surface like snow.

Emma Geen is a speculative thinker and writer whose fiction draws on her education in Psychology and Philosophy. She is studying for a PhD in Creative Writing at Bath Spa University, where she won the 2012 Janklow & Nesbit Bath Spa Prize. The Many Selves of Katherine North is her debut novel. 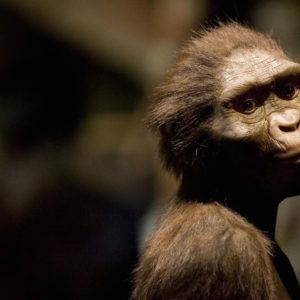 The first time I ever met a celebrity was on a June winter morning in Johannesburg. I was an undergraduate, a student...
© LitHub
Back to top