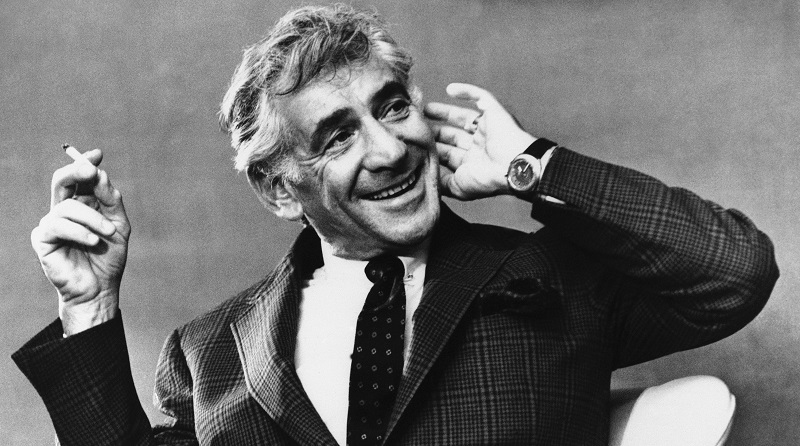 Leonard Bernstein’s first Japan tour in 1961—during which he performed ten concerts with the New York Philharmonic in Tokyo, Shizuoka, Nagoya, Osaka, Kobe, and Hitachi between April 24 and May 9—was shaped by the politics of the Cold War. As the needs of the government agencies fighting the cultural Cold War—including the State Department and the CIA—prevailed over those of the agencies and vigilante groups such as the FBI, House Un-American Activities Committee, and McCarthyite forces, Bernstein became a powerful advertisement for free, democratic America. The rise of his international fame and influence was propelled by the US investment in Cold War cultural diplomacy. During his years as the music director of the New York Philharmonic, Bernstein went on international tours to various regions under the State Department’s Cultural Presentations Program.

In the context of the Cold War, of particular interest were programs related to the Soviet Union. In 1959, Bernstein led the New York Philharmonic on a tour of seventeen European and Near East countries, including two weeks in the Soviet Union. Bernstein’s 1961 Japan tour was part of the East-West Music Encounter, an international conference and festival “conceived to demonstrate the irresistible affinity between performers and composers of the Eastern and Western worlds.” According to the event brochure, Japan was selected for the event because it “is the only country in the world where both Eastern and Western music have reached a high degree of development simultaneously.”

Opening with a gagaku ceremony, the program included a solo recital by violinist Isaac Stern, a concert of “Oriental [Indian and Thai] music and dance,” the Juilliard String Quartet, the Japan Philharmonic Symphony Orchestra, a kabuki performance, a concert of contemporary Japanese traditional music, and a concert of the NHK Symphony Orchestra. The festival was sponsored by the city of Tokyo, the Society for International Cultural Exchange (a Japanese foundation established in 1959 with the support of prominent businessmen and corporations), and the Congress for Cultural Freedom (CCF). The remaining expenses of the tour—approximately $350,000—were covered by Columbia Broadcasting Company, John D. Rockefeller III, and two of the directors of the Philharmonic.

Japan had recently experienced mass, often violent, protests against the 1960 revision of the US-Japan Security Treaty (Anpo), resulting in the cancellation of President Eisenhower’s scheduled visit to the country. Japanese leftists protested that the festival was organized by composer Nicolas Nabokov, an allegedly virulent anti-Communist, sponsored by a foundation that symbolized American capital, and had no representation of music and musicians from the socialist nations. Prominent music critic Ginji Yamane published a harshly worded op-ed in the country’s largest newspaper, Yomiuri Shimbun, asserting that the festival was designed primarily for the management organizations rather than the musicians. The organizers made little effort to integrate or feature local Japanese musicians, he pointed out, and so they failed to contribute to the growth of the local musical culture. Furthermore, he argued, the event was controlled by foreign interests despite the considerable funds coming from Tokyo taxpayers.

For the Japanese hosts, Bernstein’s tour with the Philharmonic was an occasion to showcase the nation’s modernity and the rise of its economic and cultural power.

It was not only the US government that was invested in Bernstein’s tour. The Tokyo concerts took place at Tokyo Bunka Kaikan, completed just a few weeks earlier to commemorate the five hundredth anniversary of the city. For the Japanese hosts, Bernstein’s tour with the Philharmonic was an occasion to showcase the nation’s modernity and the rise of its economic and cultural power.

The musical programming involved a different sort of politics. Just a year earlier, the Boston Symphony Orchestra’s Japan tour caused the Japanese presenters to feel “pushed around like in the days of the occupation.” This made the organizers of the New York Philharmonic tour particularly sensitive to the diplomatic aspects of the programming. They took extra care in consulting with the Japanese organizers and the local advisors before determining each concert program. Judging that “for diplomatic reasons. . .it would be better if performers avoided performing their own music,” Bernstein’s Jeremiah Symphony was not performed as part of the festival but rather at the Tokyo Gymnasium and in Osaka.

Nabokov had suggested Henry Cowell’s On Gaku, a quintessentially Orientalist piece using the pentatonic scale and other supposedly Asian musical elements, but later advised Bernstein in a telegram: “Advance Japanese reaction to proposed Cowell piece [Ongaku] but not to other Cowell music very bad. Japanese consider this piece condescending. Strongly urge its elimination. Another Cowell piece perfectly acceptable.” Bernstein decide to take Cowell off the program altogether, and after considering several suggested works of Japanese composers, he chose Toshiro Mayuzumi’s Bacchanale for the May 5 concert. Featuring Mayuzumi—a composer interested in amalgamating Western musical techniques with aspects of traditional Japanese music—was an especially apt choice for this cross-cultural festival and a meaningful gesture to the Japanese audience.

What made this tour particularly meaningful for the Japanese audiences was the presence of Seiji Ozawa as an assistant conductor. After studying under Hideo Saito at the Toho School of Music in Tokyo, Ozawa left for Europe in 1959 and won first prize in the International Besançon Competition for Young Conductors, which put him on the map of emerging classical musicians. When he won the Koussevitzky Prize at the Berkshire Music Center in Massachusetts, Ozawa caught Bernstein’s attention and was assigned to be one of his three assistant conductors for the following season.

At the time of the tour, Ozawa was still a 25-year-old conductor largely unknown to Japanese or world audiences. It was Bernstein’s faith in Ozawa’s talent and promise that enabled his homecoming and major debut in his homeland. Ozawa’s success bolstered nationalist pride in the midst of Japan’s rapid economic growth and reentry onto the world stage. Japanese critics enthusiastically reviewed Ozawa’s performance, stating that “with his unique performance style, he embodies a new type of conductor we have not seen among the Japanese thus far, and we have much to expect from him in the future. His performance with the Japan Philharmonic persuaded us of his superb sensibilities and grandeur.” Ozawa’s memoir, published in Japanese a year after the 1961 tour, Boku no ongaku musha shugyo—or “My journey of the way of music,” with the word musha shugyo invoking the apprenticeship in the way of martial arts—vividly depicts Ozawa’s first impressions of Bernstein and the warm support and love with which the American maestro showered him.

A serious intellectual of the Renaissance type, Bernstein already had some knowledge about Japanese history and culture, but his more personal interest in Japan was awakened by his young protégé. Ozawa taught him some Japanese phrases as well as customs and culture in preparation for the tour, and the maestro immediately fell in love with Japan and its people. He became a fan of kabuki, noh, and gagaku and made a point of going to see performances during all of his subsequent visits. He wrote his wife Felicia about the gardens, rooms in the Japanese inn, temple, castle,

And oh, the girls. . .crowd around, laughing, attending, bubbling, dressing and undressing you, preparing your kimono, your bath (oh, that wonderful bath of old scoured wood)—and with none of the artificial gaiety of the Geisha (who embarrass the wits out of me) but with a natural spontaneous joie de vivre and delight in making you happy.

Bernstein got more than a superficial tourist’s view of the country. Composer and music critic Heuwell Tircuit, who wrote for the Asahi Gramophone Japan, showed Bernstein a seedy part of Tokyo filled with drunkards, rats, and bar hostesses accosting foreigners. According to Tircuit, rather than expressing displeasure or disgust, Bernstein showed sincere empathy for those living in difficult circumstances.

Bernstein’s genuine interest in the country, efforts to engage the audience, and friendly and charismatic manner captivated his Japanese fans. Bernstein greeted audiences with Japanese sentences that Ozawa had taught him. After an acoustically disappointing and physically exhausting performance at the Tokyo Gymnasium, the staff told him that there were over a thousand people in line for his autograph, and they could not possibly accommodate all of them. Always eager to meet his fans, Bernstein insisted on generously and patiently interacting with the entire crowd.

The musicians and the orchestra staff were impressed with the cultural sophistication and attentiveness of their Japanese audiences. “We learned here that the Japanese audiences sit quiet as mice—might they be emulated by [New York audiences at] our Friday afternoons! At the intermission they applauded enthusiastically but not ecstatically. At the end they really applauded hard and long and simply refused to move until rewarded with an encore,” Keiser reported.

One of the last concerts of the tour was held in Hitachi, an industrial city seventy miles north of Tokyo. The Hitachi Company had built a fine concert hall on a hill overlooking the town and the sea in memory of its founder and offered a concert series for its employees. Clearly impressed, Keiser wrote to the board, “This is an example that I hope may be followed in the United States by similar manufacturers!” and again reported the enthusiasm of the audience.

Bernstein’s genuine interest in Japan, efforts to engage the audience, and friendly and charismatic manner captivated his Japanese fans.

Keiser’s reports about the positive responses of the Japanese audience may have been overly rosy, however. Despite all the political and financial investment in the East-West Music Encounter, the Philharmonic did not play to a full house in Tokyo. This may have been partly because of the controversial politics surrounding the tour, or because the final concerts fell on a holiday weekend. It may also have reflected the traditional preference for European conductors and orchestras among Japanese listeners of classical music.

But most likely, the issue lay in the programming. The festival concert consisted of Roy Harris’s Symphony no. 3, Bartók’s Music for Strings, Percussion and Celesta, and Ravel’s La Valse.28 In addition to this opening concert, the Philharmonic performed two additional concerts, the first consisting of Hindemith, Berg, Chavez, and Mayuzumi; the second featured Ives’s Unanswered Question and Symphony no. 2 and Stravinsky’s La Sacre du Printemps. Although such bold programming was chosen in response to the organizers’ request that the orchestra perform twentieth-century music, it was perhaps too avant-garde for the audience of the time. According to the recollection of music critic Sekio Tojo, the applause after the performance of Ives was sadly sparse. Even the eagerly awaited La Sacre du Printemps was, to Tojo’s ears at least, hollow and bland. Excerpted from Dearest Lenny: Letters from Japan and the Making of the World Maestro by Mari Yoshihara. Copyright © Mari Yoshihara 2019. Reprinted with permission from Oxford University Press.

Mari Yoshihara is Professor of American Studies at the University of Hawaii. She is the author of Embracing the East: White Women and American Orientalism and Musicians from a Different Shore: Asians and Asian Americans in Classical Music. 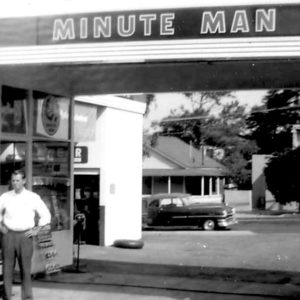 Elegy for Robert Frank I’ll never forget your gas pumps rusted, the sign rising above them shouting SAVE, never...
© LitHub
Back to top