When Art Cannot Console Us in Death

Emily Harnett on the Hard Art of the Death Memoir

All credit to Andrew Solomon in last Sunday’s New York Times book review: for the life of me, I couldn’t have read so many books about death. On the premise that mortality comes “in and out of fashion,” Solomon reads five recent memoirs concerning death or dying and, in one case, authored by the recently dead. It’s a heavy reading list, a syllabus of vicarious suffering with plenty of overlap. As Solomon notes, several of the authors quote Dylan Thomas. Two of them are hospice workers. All of them, as Solomon has it, are good writers. And one of them, Marion Coutts, is exquisite—the recipient of Solomon’s most lyrical praise.

From this set of memoirs, and primarily Coutts’s, Solomon spins out a set of elegant commonplaces: “that we strive towards intimacy in the anticipation of loss;” that being “in denial about death pushes us towards faith;” that, “anyone who is fully alive to his or her death need not worry that its meaning will be lost.” He suggests, as people often do, that “the transience of life is the engine of its meaning.” Such notions, he acknowledges, “may be the way of making the best of a bad situation.” But “what a way it is,” he tells us. Better threadbare consolation than no consolation at all.

Perhaps. But logic like Solomon’s—really, the standard secular logic for grappling with death—sounds less like consolation and more like a bad bargain. It would have us believe that death isn’t a robbery so much as an investment—mortality as down-payment on meaning. It’s easy enough to say that we’re willing to pay that price when we’ve already paid it. As it happens, we’re stuck with what we have: a life that ends, and an unjustifiable conviction that it matters.

There’s no consolation for the fact of death, and yet we try to conjure it in unlikely places, as though pulling a rabbit out of a hat. The hat that Solomon prefers is art: the “ringing lucidity” of Coutts well-wrought prose, which he offers as “evidence that we can die or lose each other beautifully, even as we try to prolong life.” Many of the available theories about why we make art offer similar consolation. They suggest that art is a form of immortality; that art is a refuge; that art is what we get in return for a world without God, and so on. In all of these theories, art suffers. Art might be immortality, but so is being cryogenically frozen—I know which one I’m betting on. Perhaps art is what we get in return for an absent God. But by that logic, art seems less consolation than a consolation prize.

All this to say that there might be value in being inconsolable, in being suspicious of consolation, which might, after all, be resignation with a smile. Solomon says as much, writing that “the cornerstone of optimism is the willingness to believe that the inevitable is desirable,” and that this is “the only fruitful view.” But this isn’t the only fruitful view—it isn’t even fruitful. It’s remarkably bleak as far as self-serving delusions go. If I were to cherry-pick something on which to stake the value of my entire life, I wouldn’t pick death. I would pick, literally, anything else—alligators, or unicycles. I would prefer not to pick anything at all. I don’t accept that mortality is a bargain, that the price we pay for everything good in life is life itself. I can’t attribute the things I love to what has most pained me, and I believe, if only intuitively, that life is valuable not because it ends but because it’s life.

Life for life’s sake—that would be an apt way to summarize my father’s approach to dying. For example: we both really loved sandwiches. In the last years of his illness, I remember him remarking on the fact that most banal pleasures remained intact for him. The world could be ending—his life could be ending—and he would still get out of bed to make himself a repulsive “cheese sandwich,” five or six slices of American on a dinner roll. He didn’t get out of bed because he was under a pall of mortal danger. He got out of bed because he liked sandwiches.

His death, for me, marked the end of consolatory ideas. I had believed in God, for instance, until he died—until his funeral specifically, when I looked at a wooden box that somehow contained my father and realized that I didn’t believe there was any life for him or me beyond that matter. I had always assumed that, after he died, I would be able to feel his presence somehow, remote but easily summoned, like a genie. But all I felt was his absence. I had to delete his number from my phone because, even with him in the ground, I still called it sometimes, just to listen to it ring.

Unsurprisingly, I stopped reading during this period, or at any rate started watching a truly staggering amount of television. Even by my standards—the standards of a person who’s seen almost every episode of Gilligan’s Island—it was extreme. I needed to be distracted, and I couldn’t be distracted by things that risked boring me or, paradoxically, by things that demanded my attention. I needed to inhabit the kind of twilight consciousness you can only enter under certain types of anesthesia or during back-to-back episodes of Real Housewives of Beverly Hills. My belief in God, happily free of doctrinal obligations, had really been a belief in an aesthetic—an intuitive sense that the world was designed, however indecipherably. The bare fact of this design meant the world had a soul, and so did I. Like all mystical presumptions, this notion was a comfort. There was nothing to replace it, but there was always more television.

I don’t believe that anyone who’s ever lost a loved one finds consolation. We just learn to live without it. And this—not rueful gratitude for our own mortality, or a desperate fetishization of art—is the fruitful view: that life matters because we’re alive, and art matters because it’s art. We don’t make art to compensate for death, to trade our pain for diamonds of prose. We make art because we like it. We would make art even if we could live forever. This is why Solomon’s piece moved me—not with its consolatory gestures but with its tender regard for its subject. Death, as Solomon notes, is the oldest, even the only, story in literature, which moves in and out of cultural fashion. But Solomon is too good a reader to dismiss this set of books as a literary fad—a mark of respect too often denied to memoir. He reads them seriously, as both documents of pain and as works of art.

Art for art’s sake—that was the rallying cry of 19th-century French aesthetes and the mission statement of a 20th-century Russian one named Vladimir Nabokov, a novelist famous for writing a very beautiful book about a pedophile and, less famously, a very beautiful memoir. What’s remarkable about that memoir, Speak, Memory, is how little it contained of Nabokov’s actual life. You don’t learn from reading Speak, Memory that Nabokov had a brother. But you learn very quickly that he had a polyglot vocabulary, a compulsive attentiveness to perceptual detail, and a cheerful sense of his own mortality: “The cradle rocks above the abyss, and common sense tells us that our existence is but a brief crack of light between two eternities of darkness.” This is how the book begins.

There’s nothing in Speak, Memory about Nabokov’s siblings and there’s little about his father, who was killed when Nabokov was young. Nabokov loved his father. He had, by all accounts, an idyllic childhood, whose contours and sensations Speak, Memory is devoted to reproducing. I had read this book before my own father died—it was my father who introduced me to Nabokov. I read it again a few years after. I had always thought of Nabokov’s aestheticism as a kind of fey idiosyncrasy, one which could be, at times, unbearable—like his contempt for critics, psychologists, socialists, for people who “move their lips when they read,” for “women writers,” quite possibly for women in general. All of those qualities become less bearable over time. But the aestheticism, the uncompromising commitment to verbal beauty, became less mockable.

Solomon’s observation of Coutts’s writing, that it turns the coal of her experience into a diamond, sounds Nabokovian—something you could lift straight from his oft-quoted lectures on literature, which are really lectures on the literature that Nabokov likes and why he likes it. Speak, Memory is full of such riches, fine sentences that aim to dazzle. That aim, with its sights set on art for art’s sake, seems less like an arid pretense to me. It seems like an act of love—a refusal to explain away the inscrutability of either loss or life while insisting on the beauty of the latter. We still read Nabokov for the same reasons we read any memoir: because beautiful writing produces a complicated joy. That joy isn’t the consolation of art; it’s a description of it. 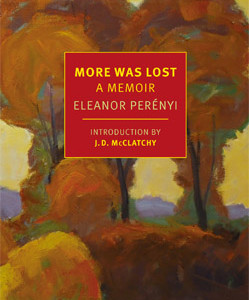 Little by little the outside world began to creep in to our daily lives. We couldn't help reading the papers, and Zsiga began...
© LitHub
Back to top