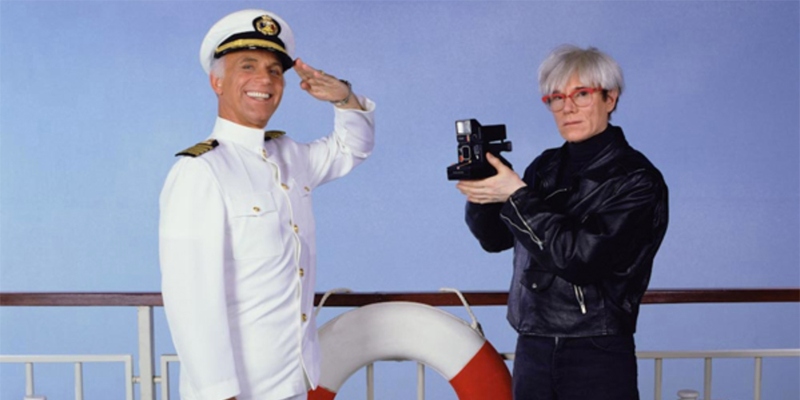 When Andy Warhol, Famous Artist, Was on The Love Boat

“No one knows if the famous artist really loved anyone. No one can really agree on a definition of love, anyway.”

For a few seconds, during the opening credits, the famous artist’s face appears inside a stylized blue wave. He’s wearing a tux like all the other male stars in the episode: Andy Griffith, Milton Berle, Raymond St. Jacques. He’s last in the credits because his name begins with W. Long ago his name ended in A, but he dropped it. No one seems to know where the A went.

The famous artist’s storyline in this episode is called Picture from the Past.

In all the most famous pictures of him, he looks like he is pretending to be a person. All the mannerisms of a person are there. And the accoutrement: hair, suit, shoes, a face. Beyond the fact that there is a face though, what? It is unreadable. In fact, it is aggressively empty. People have said it is boredom or shyness, aloofness or smugness. But it is the thing in the middle of all that, the “or.”

I would rather watch somebody buy their underwear than read a book they wrote—see how even his sentences sound like parodies?

The famous artist boards the MS Pacific Princess with an entourage bedecked with the most stereotypical of 80s fashions: a pair of headphones, a Bolero hat, a tight, shiny minidress. The famous artist is here to celebrate the ship’s 200th voyage. He is to pick a “lucky woman passenger” and paint her picture.

His entourage includes the actor Raymond St. Jacques, whose character is unnamed, and two waif-like women named Spock and B.F.D. played by Laura Dean and Vera Perez. The women’s characters have names yet are never referred to, nor do they speak. But they wave which seems important. They all wave from the balcony of the ship, smiling as it shoves off to Cabo.

When you watch it, you cringe and then whatever cringed in you cringes.

The famous artist waves with his right hand like a baby learning goodbye.

The fact that the famous artist appears on an episode of The Love Boat isn’t special. The famous artist shows up in dozens of movies and television shows. Sometimes he plays himself, sometimes he doesn’t. The actor Cary Elwes plays him in the 2018 film Billionaire Boys Club. Funnily enough, in this movie the famous artist is in town filming The Love Boat episode. As he dines with Kevin Spacey, they gossip about his episode’s co-star, Milton Berle’s, huge penis. The scene is smarmy, oily, predatory, awkward. When you watch it, you cringe and then whatever cringed in you cringes.

In I Shot Andy Warhol, Jared Harris plays the famous artist but is too sweet.

In Factory Girl, Guy Pearce plays the famous artist but is too handsome.

In Basquiat, David Bowie plays the famous artist but is too Schnabel.

In The Doors, Crispen Glover plays the famous artist but is too generous.

In Men in Black 3, Bill Hader plays the famous artist but is too silly.

In Watchmen, Greg Travis plays the famous artist but is merely a prop.

In Death Becomes Her, Bob Swain plays the famous artist but his bangs are too long.

In the 80s, my sister and I were sometimes invited to swim in our neighbor’s grandmother, Noreen’s, swimming pool in Brentwood. Once at Noreen’s, the actor Judd Nelson was in the mansion next-door filming the miniseries, The Billionaire Boys Club. He was the star. He was playing the main character, Joe Hunt. We barely knew who Nelson was, but what we knew most was that he was well-known. My sister and I take a photo with him. We hug him. I cannot remember what we look like in the photo—the photo is lost. Are we smiling? I remember feeling so shy that I wished I was anyone else, or maybe no one.

The famous artist is poolside. He is photographing subjects randomly, it seems. But it is not random at all. He is guided by the artistic aesthetic, that elite thing that cannot be questioned, a knowledge of what is beautiful that approaches divinity—off-limits to all but a few.

The most famous artist on Earth is playing himself on TV pretending to sign his name with a fake Hollywood pen for people pretending to adore him.

In many movies, photographs, and books the famous artist spends a lot of time on the telephone.

In The Doors, Crispin Glover holds a golden telephone. He tells Val Kilmer playing Jim Morrison that God is on the other end of the line. The famous artist admits he has nothing to say to God and hands it over to Jim. Perhaps someone else would have something boring enough to tell God?

The famous artist is on the phone with his friend Viva when two bullets ricochet around his ribcage.

The famous artist almost dies on the phone.

The ship’s photographer, Ace, has slipped the famous artist some of his own photographs. He confronts St. Jacques:

Ace: Did the famous artist see my photos?

St. Jacques: Yes, he called them the essence of crass commercialism.

St. Jacques: On the contrary, the famous artist says crass commercialism is what makes America great.

One cannot just speak to the famous artist directly. Talking to the famous artist requires playing that old familiar game, Telephone. It is a lot like praying to God through Jesus by the Holy Spirit. By the time your prayer gets to God who knows what the hell you’re asking for.

Near the end of the episode one of the characters calls the famous artist a “New York flake ball.” In this context, “New York” means “pretentious” and “flake ball” means “gay.”

Words being the best actors of all.

The more famous you are the more important the things you hide become.

The famous artist compulsively wore wigs—even wigs of various lengths to pretend he got his hair cut. In 2020 three of them were under glass at the Tate Modern. Shirley from the pancake house where I used to hostess wore wigs, too. I am sure they are in a landfill at this point.

Like in real life, the famous artist spends much of the episode lurking in the background taking photos. We seem him do this near the pool and on the deck. Famously, the famous artist centers himself by not centering himself. The famous artist’s absence is doubled when he is flanked by thin, beautiful women, gay people, people of color, and other things the great American audience finds extraordinary. All these people cement his presence.

At one point, the famous artist stops to sign autographs for the great American cruise ship passengers. The most famous artist on Earth is playing himself on TV pretending to sign his name with a fake Hollywood pen for people pretending to adore him. And, if you got this far, we’re thinking about it 37 years later.

Is anything ever really happening?

No one knows if the famous artist really loved anyone. No one can really agree on a definition of love, anyway.

Sommer Browning is a poet, writer, curator, and artist living in Denver. Her latest book is Good Actors (Birds, LLC; 2021). She's the author of two other collections of poetry, Backup Singers and Either Way I'm Celebrating, as well as the artist book, The Circle Book (Cuneiform Press), the joke book You're On My Period (Counterpath), and others. In 2017, she founded GEORGIA, an art space in her garage in Denver. Her poetry, art writing, and visual art have appeared in Hyperallergic, Bomb, jubilat, Chicago Review, Entropy, The American Poetry Review, and elsewhere. She is a librarian.

“I think I might have gone on drawing forever.” Annie Hartnett on Giving the Gift of Art 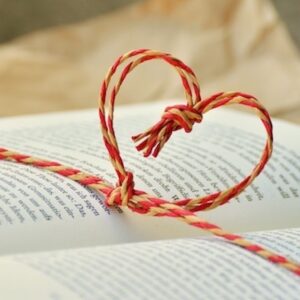 “I think I might have gone on drawing forever.” Annie Hartnett on Giving the Gift of Art

During the end of my MFA years, I asked one of my professors how to succeed as a writer in The Real World. He had two pieces...
© LitHub
Back to top