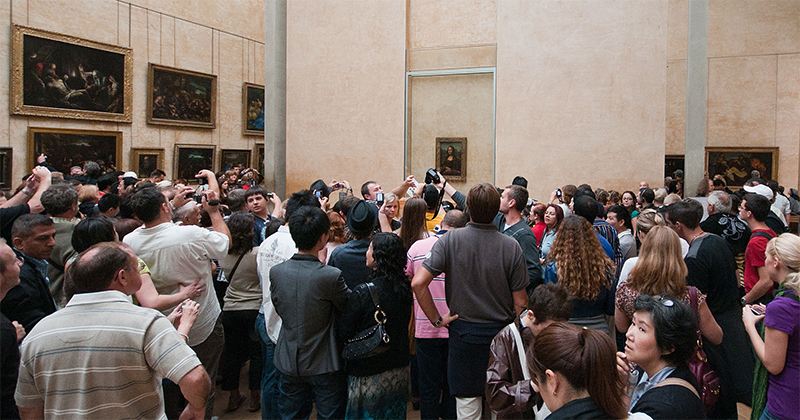 Whatever Happened to the Ecstasy of Art?

I recently went on a nine-day ayahuasca retreat in the Peruvian jungle. The retreat was extraordinary and somewhat indescribable. Our group of 22 pasajeros took part in five night-time ceremonies, in which we drank the foul-tasting potion, waited for the seasickness, then sailed off into our personal and collective subconscious, guided by the haunting songs of the Shipibo shamans. For a rationalist control freak like me, it was both terrifying and liberating to get out of my head. But the “integration phase” in the weeks afterwards was actually harder—and more rewarding.

We were advised to focus diligently on spiritual practices to help the integration. Meditation, yoga, prayer, journaling, time with loved ones; no sex, booze, or spicy foods; and lots of time in nature. I live in London and went for a few blissful walks on Hampstead Heath. But one day it was raining hard, and I decided the next best thing would be a trip to the National Gallery to immerse myself in artistic beauty.

But where precisely should I head? The Renaissance? The Impressionists? I didn’t have time to make a choice—I was immediately drawn to a large painting in which the trees seemed to breathe and glow. I sat down on a bench and marveled at it.

There were in fact two paintings on the wall, both by 18th-century English pastoralist Thomas Gainsborough. The lower painting, Mr and Mrs Andrews, showed a squire and his wife in front of a scene of propertied civilization. Shotgun cocked, fields ploughed, wife sedate, spaniel by his side, Mr Andrews seemed to be master of all he surveyed. But the upper painting, Cornard Wood, near Suffolk, subverted this order. Here, the trees dwarfed the human figures and pulsated with intelligent power. 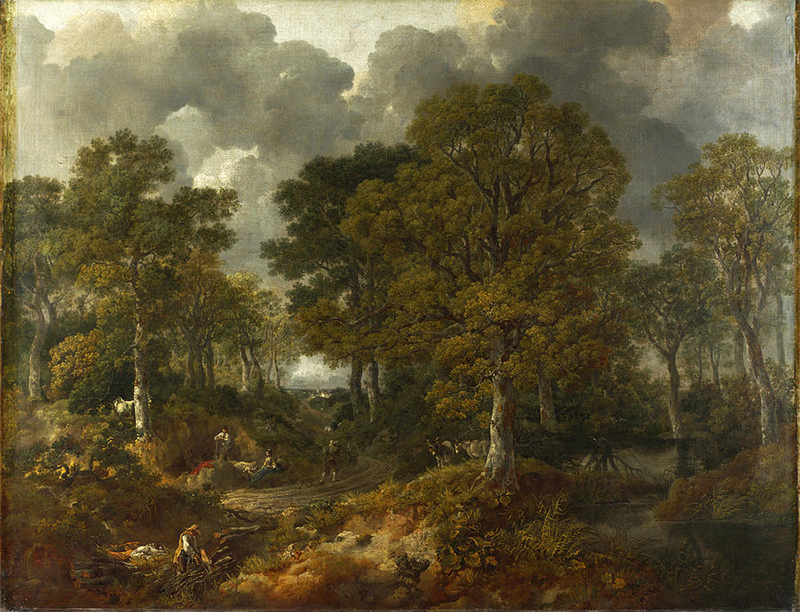 I walked from that room into the Sackler Room, filled with English pastoral scenes. These paintings, by Gainsborough, Stubbs, Constable and Turner, previously seemed to me the stuff of twee postcards and table mats. But now they were alive, they sang a psychedelic pastoralism, an ecstatic celebration of trees, sunlight, storms, horses, dogs, and the human form.

In that moment, it seemed to me that all art is “psychedelic,” a word coined by the chemist Humphrey Osmond, literally meaning “mind-revealing.” For doesn’t all good art involve an intensification of consciousness in the artist, an aliveness to light and color, to nature, to emotion and drama, to multiple meanings, to allegory, symbol and myth? Isn’t it the communication of souls—the artist with the divine energy of being, with the artists before them, and potentially with the viewer, if their consciousness is ripe for the encounter?

For most of human history, this would be a perfectly normal way to talk about the arts. Painting, sculpture, music, poetry, theater, and dance were understood as ecstatic techniques that could connect one’s spirit to the spirits of other humans (dead or alive), to nature and the gods. That’s how the Shipibo shamans of the Amazon understand their songs, pottery, and textiles. The ancient Greeks likewise knew the arts could be a means to ekstasis—a shift in consciousness beyond the ordinary self.

Artists and aesthetic theorists of the Middle Ages, the Renaissance, Romanticism, and Modernism all thought arts could be a means to spiritual ecstasy. There is, of course, a great difference between the aesthetic and metaphysical beliefs of Augustine and Edmund Burke, Marsilio Ficino and Emily Dickinson. But it was standard, until recently, to believe that the arts could connect human consciousness to a greater spiritual reality.

Today, this way of talking about the arts is extremely rare in western humanities and arts policy.

Take, for example, the Cultural Value Project, a flagship research project from the Arts and Humanities Research Council, which is the main funder of arts and humanities research in the UK. The project aimed to define and measure the value of the arts, beyond their economic value, and thus to justify their funding by the state. It took five years, cost several million pounds, and funded over 70 articles, reports, seminars and public events. The final report ably explores how the arts cultivate empathy, self-reflectiveness, civic consciousness, and well-being. But barely a word on transcendence or a sniff of ecstasy.

The only mention of this experience in the entire project came in a 2016 journal article that researched audiences’ experiences at a concert hall in Edinburgh. The authors found that all the people interviewed were drawn to the theater, in part, because they sought transcendence:

. . . they all referenced an experience that, at its best, is in some way transcendent. This might entail “losing oneself,” an overpowering experience of being in a crowd, reinforcing bonds with fellow audience members, or immersion in the music aesthetic. While the concert / gig does not need to attain this “transcendence” to have value, it is the potential for that which keeps people going back.

John Maynard Keynes, founder of the Arts Council, would have understood this appeal; his friend Clive Bell insisted on art as a “direct means to aesthetic ecstasy.” But arts policy, like all policy, is now dominated by the language of dispirited managerialism. John Tusa, former managing director of the Barbican in London, wrote in 2000: “We have lost a vocabulary. . . where inspiration is regarded as heaven-sent rather than an acceptable risk. Instead, we have a materialistic debate where the immaterial is dismissed as pretentious rather than welcomed as essential.” The closest arts policy came to ecstasy was in 2004, when then minister of culture Tessa Jowell wrote in passing of the “transcendent thrill” of great art.

Across the Atlantic, defenses of the arts are just as prosaic. Certainly, academics increasingly insist on the arts’ affective power—James Elkins’ Pictures and Tears (2004) is an example of this “affective turn.” Martha Nussbaum’s Not for Profit: Why Democracy Needs the Humanities (2010) championed the arts’ power to shape our moral emotions, like sympathy. Yet it’s noticeable that, in a book which constantly refers to the aesthetic and educational theories of Bengali writer Rabindranath Tagore, there’s not a word about ecstasy, transcendence, or rapture. Tagore’s writings overflow with rapture, but Nussbaum—the leading academic philosopher of emotions—is too buttoned-up to go there.

Why are western academics so transcendence-phobic? Western intellectual culture has, in general, an antipathy to ecstasy stretching back at least as far as the 17th century. Intellectuals privilege the rational-analytical and denigrate and pathologize non-rational modes of consciousness. The language of transcendence can sound vague, spiritual-religious, ahistorical, right-wing, and elitist. Humanities academics tend to be left-wing historical materialists, who pride themselves on their ability to analyze and expose hidden power agendas.

But while champions of transcendence can be conservative cultural snobs, like Roger Scruton or Harold Bloom, ecstasy can also be populist, transgressive, and subversive of hierarchies in taste, gender, class, ethnicity or empire. As the anthropologist IM Lewis noted, ecstatic cults are more often found at the margins than the center of society. Additionally, there’s a lot of interesting history to explore on the different cultural forms ecstasy has taken, from medieval mystics to 80s acid house, from the agnostic Sublime of the Romantics to the nature paganism of Ted Hughes and the geek-rapture of Ray Kurzweil. There are ecstatic materialists, like Philip Pullman, and ecstatic anarchists, like Simon Critchley.

Academics should include the ecstatic in their account of the arts because audiences and artists do. Don DeLillo, David Byrne, Marilynne Robinson, David Lynch, Brian Eno, Stanley Kubrick, Peter Brook, Marina Abramovich, and many of the great artists of the last few decades have spoken of the arts’ power to lift us out of our habitual egos, deepen our awareness, transport us into other worlds, and bring us catharsis, connection, and wholeness. The ayahuasca retreat helped to remind me of this extraordinary power, but we needn’t travel to the Amazon jungle to experience it—we can visit a museum, go to the theater, or open a book.

The author does not recommend anyone under 25 or with a history of psychosis tries psychedelics, and supports their legalization and careful use in safe, therapeutic contexts. For recent books on the history and arts of ecstasy, see the work of DJ Moores, Ann Taves, Hugh Urban and Jeffrey Kripal.

Jules Evans is policy director at the Centre for the History of Emotions at Queen Mary, University of London. He is the author of Philosophy for Life and Other Dangerous Situations, which was published in 19 countries and was a Times Book of the Year. Jules has written for The Times, Financial Times, Guardian, Spectator and WIRED and is a BBC New Generation Thinker. He also runs the London Philosophy Club, the world’s biggest philosophy club.

Is it Too Late to Save the Internet from Itself? 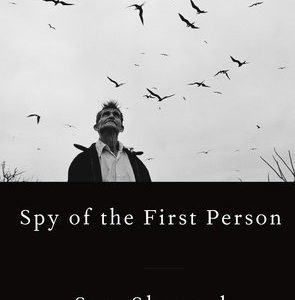 It was that time of day that I love so much. That people have written songs about. The time of day when afternoon is turning...
© LitHub
Back to top
Loading Comments...