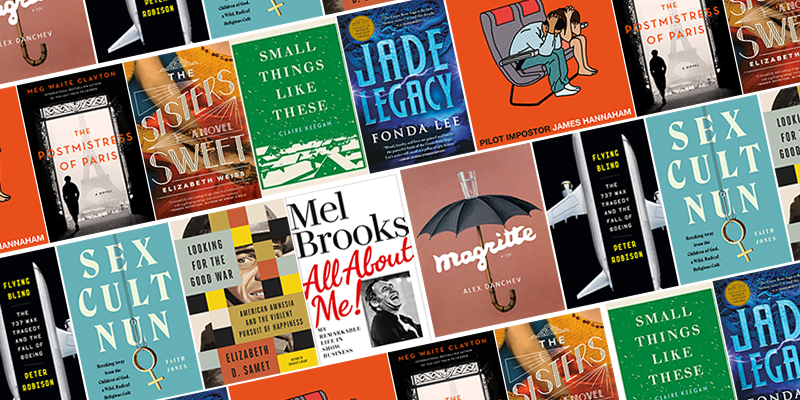 Claire Keegan’s Small Things Like These, James Hannaham’s Pilot Imposter, Mel Brooks’ All About Me!, and Alex Danchev’s Magritte: A Life all feature among the Best Reviewed Books of the Week.

This small, exquisite book leaves a large impression … Keegan knows how to weigh and pace her sentences, and her fine judgement delivers many subtle pleasures … Keegan fully exploits the power of understatement. Most of the big events either take place offstage or happened in the past, and if strong emotion is unavoidable, she displaces it with a verisimilitude in keeping with her characters … Keegan’s restraint in such moments has an amplifying effect … The climax of Small Things Like These is deeply moving … Masterpiece.”

“You fall into these books like a love affair—all rough physicality and surprise—but stay (across thousands of pages) because there’s so much more to it than that. Laughs. Heartbreak. Depths that loom unexpectedly. Friends that come and go … Mostly you get hooked because Lee has created a world that feels as real and logical and lived-in as the one outside the covers. Both more ordered and more chaotic at the same time. Deadlier and more beautiful. They are terrible temptations, these books. You pick them up and it’s hard to put them down … Thirty years of love and war and vengeance and betrayal—that’s what Lee is offering here. A long slide into an imaginary history glimpsed in explosive, Technicolor bursts, punctuated by the stutter of machine guns, sweetened by rice wine and almond tarts. There are deaths and defeats in Legacy that will rock any long-time Green Bone fan. Victories that feel so tenuous you want to dig your nails into the pages just to hold them tighter.”

2 Rave • 3 Positive
Read James Hannaham on why writers shouldn’t wait for permission to create the stories they want, here

“Hannaham’s book—not quite a novel, not quite a short story collection, not quite like anything else—is a clever series of reflections on art, doubt, race, and impostor syndrome … Hannaham can switch gears quickly from the tragic to the comic, and the ensuing whiplash the reader experiences is as fascinating as it is destabilizing. Each section of the book is beautifully executed in its own way, whether it’s about a pedophile who agonizingly fights his urges or a White police officer who pulls over a driver of color and recites the opening lines of famous poems at him. This book might be impossible to classify, but it’s easy to admire—Hannaham continues to be one of the country’s smartest and most surprising writers of fiction (or whatever this book actually is) … Unclassifiable, dizzying, and gorgeous.”

3. The Postmistress of Paris by Meg Waite Clayton
(Harper)

“Clayton expertly renders the story of a courageous American woman’s role in the French Resistance during WWII … Clayton’s lyrical, thought-provoking prose breathes life into her characters. This sterling portrait of a complex woman stands head and shoulders above most contemporary WWII fiction.”

“.. an elegant, immersive family saga … the city comes to vivid life beneath Weiss’s capable hand … Though slow-moving and often melancholy, The Sisters Sweet is an intimate exploration of sisterhood, identity, ambition and betrayal. It forces us to ask who we are if the very thing that should make us unique—our face—is shared by another who takes it and becomes famous in the process. The novel does a fine job of answering that question and gives us plenty of surprises along the way.”

“Far from underestimating Magritte, Danchev’s picture of him is pointillist and enormous in scope. It is full of shock, for the casual Magritte fan who knows little about his life … There is not much discussion of women in political terms in Magritte: A Life, although they appear in Magritte’s life plenty. This is perhaps the book’s one significant flaw, especially since its best surprises often occur at the intersection of Magritte’s politics and his relationship with other artists … Biographies usually attribute weight to moments or eras in a person’s life, building a narrative which will ‘explain’ the artworks, but this one attempts no such thing … Magritte: A Lifepaints scenes, all taken from life, but not forced into the realist mode which can constrain works of this type.”

2. Flying Blind: The 737 Max Tragedy and the Fall of Boeing by Peter Robison
(Doubleday)

“Through archival research, the benefit of the extensive reporting on the crashes and their aftermath, and interviews with many of the key players, Robison has produced an authoritative, gripping and finely detailed narrative that charts the decline of one of the great American companies … Robison’s history is complete, but at times excessive. Minor corporate dramas that took place decades ago get a bit too much attention. After the introduction, it is more than 100 pages before Flying Blind turns squarely to the fateful development of the Max. Once that happens, however, the narrative gains speed and hurtles toward its inevitable conclusion.”

3. Sex Cult Nun: Breaking Away from the Children of God, a Wild, Radical Religious Cult by Faith Jones
(William Morrow)

“… exceptional … Jones’s book is a truly inspirational account of questioning her upbringing (the only life she knew) and becoming a successful lawyer. She writes that her will to succeed pointed her toward a new, independent way of life that she was proud to call her own … A must-read memoir of self-discovery and reinvention that readers will find impossible to put down. Pass along to fans of Tara Westover’s Educated.”

4. Looking for the Good War: American Amnesia and the Violent Pursuit of Happiness by Elizabeth D. Samet
(FSG)

“… magisterial … there is nobility in celebrating the U.S. victory in a just war and honoring those who served. Samet reaffirms that truth while forcing our attention on a more complicated reality … The downside of Looking for the Good War is that it occasionally becomes a bombardment of cultural references, as if Samet cannot help finding validation for her arguments everywhere; stretches of the book are devoted to film and book summaries. But the strength of this approach is to remind us that there has always been an alternative to the simplistic mythmaking around World War II and its impact on our national psyche … And it’s clear that the more recent War on Terror was colored from the outset by World War II’s grip on our national consciousness, even if its reality has tracked closer to the nuanced accounts of war explored by Samet’s canon of countercultural voices.”

5. All about Me!: My Remarkable Life in Show Business by Mel Brooks
(Ballantine)

“Brooks is truly a legend of American comedy, and though it has taken him 95 years to write his memoir, it was certainly worth the wait … a narrative filled with hilarious digressions … Brooks has told many of these stories countless times over the years, but they remain as funny and endearing as ever, especially when presented in the full context of his life. It’s a story told by an inveterate writer in a wonderfully conversational style, with a hint of childlike wonder … A must-read for fans of comedy, film, and theater.”

Behind the Birth of a Poetry Collective

Neal Stephenson Has Some Opinions About the Metaverse 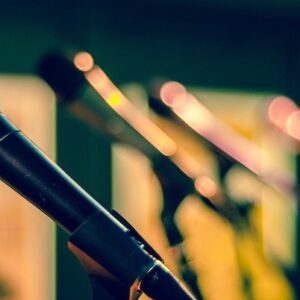 Behind the Birth of a Poetry Collective

A Friday in August, 2001. A bedroom on Fairmount Road, Brixton. Against the orange wall neat piles of jeans, along row of trainers....
© LitHub
Back to top
Loading Comments...