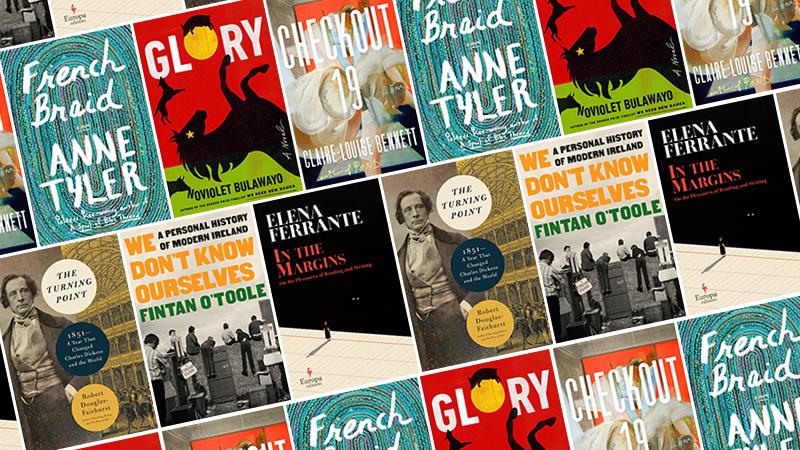 Claire-Louise Bennett’s Checkout 19, Anne Tyler’s French Braid, NoViolet Bulawayo’s Glory, Fintan O’Toole’s We Don’t Know Ourselves, and Elena Ferrante’s In the Margins all feature among the Best Reviewed Books of the Month.

“Look, the narrator says, offering page after page of funny, daring, poignant, accurate, truthful little things that upend the whole lot … I suppose you might call Claire-Louise Bennett’s novel Checkout 19 a bildungsroman if you cared about that sort of thing, but the more interesting experience is to follow the pointing finger …The narrator talks and talks, not separating her thoughts into paragraphs, but letting them run on and through and circle back and break off. I wonder if to some this would sound anxious, like rumination, but it’s not quite that, or always that. It’s more like someone trying to be precise and truthful, and teasing herself in the attempt … It’s not as if you can ever separate form from content, but in a novel about novels it seems especially important that the sentences are pleasurable—and that this pleasure, too, has something to say about how a novel works. There are a few times in Checkout 19 when you are barreling along, laughing, looking at the things the narrator wants you to look at, and you come upon a sentence, a short one perhaps, then realize you’ve come upon something harder, stranger, more mysterious than you expected … as it proceeds it’s less about reading and learning and more about writing and living … What’s amazing for the reader is to see a book so alive, so lively, so aware of what it is made of and yet so itself, so itself really that it eludes review, and ought simply to be read.”

“Tyler’s 24th novel is the latest addition to the remarkable human comedy she has spun over the last half century, mainly set in Baltimore. It is an artful mix of several recurrent elements in her work, along with some new twists, including the coronavirus pandemic. The appeal, as always, is in being privy to the feelings, insecurities, uncertainties, and peculiarities of ordinary people who come alive in Tyler’s hands. The wonder of French Braid is the easygoing fluidity with which Tyler jumps and floats between characters and decades to create what in the end is a deftly crafted family portrait that spans some 70 years … what a wonderful litter she’s sent out into the world.” 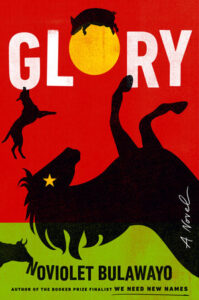 “Early on in NoViolet Bulawayo’s manifoldly clever new novel, Glory, she completely removes the vocabulary of ‘people’ from the story and the language of its characters, who are all animals … It is a brilliant, 400-page postcolonial fable charting the downfall of one tyrant—whose counterpart here is an elderly horse—and the rise of a new one … By taking humans out of the equation, Bulawayo eliminates the hierarchies that their presence would impose. She has succeeded in creating the anti-‘Babar’ … This is not Animal Farm. Not its remix, nor its translation. Glory is its own vivid world, drawn from its own folklore … by aiming the long, piercing gaze of this metaphor at the aftereffects of European imperialism in Africa, Bulawayo is really out-Orwelling Orwell. This is a satire with sharper teeth, angrier, and also very, very funny … This is also a satire in which female characters are not pushed to the margins, but hold the story together … In its depiction of transgenerational trauma, of the lineages haunted if not extinguished by the Gukurahundi genocide of the 1980s, the novel bears close literary resemblance to Art Spiegelman’s Maus … If We Need New Names was a call, then Glory is its answer. They paint a country’s past and its present.”

“One of the many triumphs of Fintan O’Toole’s We Don’t Know Ourselves is that he manages to find a form that accommodates the spectacular changes that have occurred in Ireland over the past six decades, which happens to be his life span … it is not a memoir, nor is it an absolute history, nor is it entirely a personal reflection or a crepuscular credo. It is, in fact, all of these things helixed together: his life, his country, his thoughts, his misgivings, his anger, his pride, his doubt, all of them belonging, eventually, to us … O’Toole, an agile cultural commentator, considers himself to be a representative of the blank slate on which the experiment of change was undertaken, but it’s a tribute to him that he maintains his humility, his sharpness and his enlightened distrust … O’Toole writes brilliantly and compellingly of the dark times, but he is graceful enough to know that there is humor and light in the cracks. There is a touch of Eduardo Galeano in the way he can settle on a telling phrase … But the real accomplishment of this book is that it achieves a conscious form of history-telling, a personal hybrid that feels distinctly honest and humble at the same time. O’Toole has not invented the form, but he comes close to perfecting it. He embraces the contradictions and the confusion. In the process, he weaves the flag rather than waving it.”

“[T]his collection of Ferrante’s lectures cannot be timelier in introducing Ferrante’s ideas and literary practices to a larger, global audience outside her immediate Italian-speaking following … Ferrante takes readers on a journey of discovery of writing practices. She coheres the realms of life and literature to assiduously pursue answers to questions that female writers might have, on how to blaze a trail of success in the patrilineal literary world … Ferrante does not give away definitive rules on how to write well, but she makes her definitive view on writing clear … Ann Goldstein’s translation of this collection of essays, for the most part, is also fluid and clear, emulating the familiar voice Ferrante’s English-language readers have become familiar with. The seamless collaboration between author and translator is an unmistakable triumph, and readers are surely hoping for more novels by Ferrante, translations by Goldstein, and adaptations on the silver screen to follow from this exceptionally fruitful and longstanding relationship.”

“Robert Douglas-Fairhurst isn’t an innovator in restricting his scope to a specific time-frame, but he is surely the first to compass the life of Charles Dickens this way … Douglas-Fairhurst is clear-sighted about Dickens’s failings, not merely in his treatment of Catherine but in his reactionary attitudes to class, race and women’s liberation … Yet for all the strictures on his character The Turning Point is more admiring than admonishing and the way it builds incrementally towards Bleak House, the great project that had been fermenting in his head all year, makes for a very satisfying finale. A manuscript page of the novel, dense with crossings-out and emendations, is reproduced as evidence of Dickens’s painstaking process of creation. Robert Douglas-Fairhurst has taken pains of his own and this wonderfully entertaining book is the result.”

It's the End of the World and I'm in My Bathing Suit by Justin A. Reynolds, Read by Nile Bullock 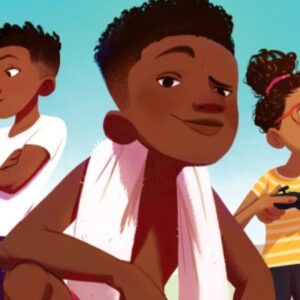 It's the End of the World and I'm in My Bathing Suit by Justin A. Reynolds, Read by Nile Bullock