He Had This Figured Out 25 Years Ago

The question of who we follow on social media is not only a question of who offers the pithiest tweets or the prettiest Instagram photos, but who creates the best digital story with their posts. From the proliferation of webcomics and blogs that allow for self-publishing, to high-profile literary experiments such as Jennifer Egan’s “twitter novel,” entitled “Black Box,” published in its entirety at The New Yorker in 2012, visual and written storytelling mediums have only become more entwined.

Scott McCloud, a cartoonist, comic book theorist, and author of the bestselling Understanding Comics, may have formed the basis for our modern understanding of how words and pictures can work together to create compelling art. Originally published in 1994, the book was meant to elevate comics and other sequential art forms as worthy of analysis in the same way great art or literature might be, by breaking down how words and pictures could be used on the page to create layers of meaning.

Today, McCloud’s book reads less like a primer in how to read and understand comics as a medium, and more like a way in which to think about how visual and written arts ought to blend together and tell a story, including on the internet. And by spelling out exactly how we understand comics, McCloud may have inadvertently created a vocabulary and set of rules for how we think about storytelling online.

McCloud’s definition of “comics” and sequential arts is purposefully all-encompassing. Rather than overly concerning himself with genre or content, he asserts that comics are “a vessel which can hold any numbers of ideas and images.” Sequential art panels partnered with words can make stories come to life because of their marriage of the visible and invisible: what we can physically see and what we can feel.

While McCloud could argue that a single post (or single panel) on social media might be considered a “cartoon” by his own definition, artists and writers often create an online persona that not only showcases their work, but entices followers to invest themselves emotionally in each and every update. An artist’s social media platform could be viewed as a curated narrative of the self that is every bit as artistic as a sequential art panel.

McCloud knew that “words and pictures together are considered, at best, a diversion for the masses, and at worst, a product of crass commercialism.” Plenty of digital storytelling, whether by influencers or artists or brands, involves creating a narrative in order to sell a product. However, that does not mean that every story told online is meant to turn a profit. The democratic nature of the internet lends itself to self-publishing, which remains popular, and that means anyone with access to the internet can share their art with an audience. The stories we tell online, whether in a YouTube video, an epic podcast, an Instagram feed (many of which could perhaps read like a comic book piece, complete with digital “gutter”), or anywhere else are as poignant or compelling as any art form in history. Scrolling through Instagram is, in a way, like reading a disjointed yet curated collection of sequential art pieces, but nowadays, there are far more voices that can make themselves heard.

The concepts laid out in Understanding Comics help to explain how, and why, multimedia storytelling has become even more expected from artists online.

Some writers in particular have embraced this art form, perhaps none more so than Rupi Kaur along with other so-called “Insta poets,” who often publish short poems with simple illustrations, easily read while scrolling. Kaur’s Instagram shows a beautifully arranged feed with short, illustrated poems interspersed with aspirational photos of Kaur on her travels around the world. McCloud might say that between the negative space in her poetry and the photos of her, there is space for the reader to create their own mythology surrounding Kaur. Her curated poems and images allow room for the reader to involve their own imagination. Followers can imagine the interior life that inspires these poems, and envision themselves traveling to beautiful places. Words and images provide the building blocks to Kaur’s brand and create a compelling narrative for her readers to follow.

Many comic artists such as Lucy Knisley, the author of several critically acclaimed graphic memoirs, post small photos or sketches of their lives to Instagram, often accompanied by witty captions. Knisley posts photos and illustrations that chronicle her daily life in an immediate, intimate way that graphic memoirs (written, drawn, and edited over long periods of time) can’t match. These posts are paired with punchlines to a visual joke, thoughts on motherhood, or news about her books and career. Knisley’s work has, in recent years, revolved around her experience as a new mother, and it is easy as a follower to feel a kinship with her through her online presence.

Followers can read, and see, vignettes of her life, from her complications post-birth to the everyday, endearing absurdities of motherhood. Her visual and written “voice,” as well as the “invisible” nature of her work, especially her references to issues surrounding motherhood, allow for readers to invest themselves in both her artwork and her family story. Beneath every post, many followers comment about how they can relate to her, or they tell anecdotes about their own children. And if they can’t relate, they often tag people who can.

McCloud could argue that this marriage of the visible and invisible that comes with making and posting sequential art in real time is what draws followers to her work.

The concepts laid out in Understanding Comics help to explain how, and why, multimedia storytelling has become even more expected from artists online. It would also explain why, in 2017, the “Dear David” Twitter story by cartoonist and writer Adam Ellis became a such a viral sensation. Ellis used Twitter to intermittently document a ghost he claimed was haunting his apartment. Using illustrations, photos, and videos, Ellis expertly created suspense using visual and non-visual clues, with the added urgency of a tweet that could immediately be read by (as well as shared and liked by) his hundreds of thousands of followers.

McCloud gave us a vocabulary for thinking about the ways pictures and words can work together in harmony.

Following the tenets of sequential art that McCloud expressed in Understanding Comics, Ellis strategically released certain pieces of information and media to his readers to deliver maximum storytelling impact (and maximum horror). McCloud might call this a serialized multimedia sequential art piece, even if Ellis claimed that he was merely updating what was happening to him in real time.

His choice to share the story in this way also allowed for “involvement” from his many followers—mostly fans reacting in horror, or dissecting his photos, sketches, and videos for evidence of being doctored. Followers feel involved because they have access to Ellis’ own fear and vulnerability (or the performance of it), therefore making it all the more personal. McCloud might argue that this access and involvement is what kept many fans of the story returning to his Twitter feed over time for updates. Ellis’ saga became so popular that he has even garnered a movie deal for “Dear David” from New Line Cinema.

Movie studios aren’t the only ones picking up on the popularity of multimedia online storytelling. As Rebecca Mead has reported in The New Yorker, many new media companies such as podcast incubator Pineapple Street Media are experimenting with multimedia ways of storytelling and figuring out how digital media products like podcasts can expand into movie and TV franchises, books and audiobooks, and beyond. The success of some multimedia crossovers, such as Amazon Prime’s TV series Homecoming (adapted from an fictional podcast series originally produced by Gimlet Media), means that the entertainment industry will likely continue to turn to, and invest in, digital storytellers, especially those working in more than one medium.

Proof of this strategy can be also seen in how older media companies are now viewing Instagram, Snapchat, and other platforms as vital avenues to finding new audiences for their products and stories. National Geographic, a print magazine that is more than 130 years old, has become hugely successful on both Snapchat and Instagram in the last several years, and in 2017, the company topped over 350 million followers across all social media platforms. In February of 2018, editor-in-chief Susan Goldberg told Marketing Magazine that nothing they produce is purely for print or for social media; instead, their staff repurpose text, photos, and videos to be shared in different ways to reach different audiences. This kind of strategy requires thinking not only in text and pictures, but also how a story will read in sequence (or out of sequence) both in print and online.

While McCloud could not have predicted what storytelling would look like on the internet a quarter century ago, he certainly gave us a vocabulary for thinking about the ways pictures and words can work together in harmony, invite the reader in, and allow them to participate, closing the gap between artist and follower. Sequential art analysis teaches us to read the visible and invisible as we begin to fill in the “gutter” for ourselves.

Sarah Rosenthal is a Nonfiction Writing MFA candidate at Columbia University. Her writing has been featured in McSweeney's Internet Tendency, The Toast, The Belladonna, The Citron Review, Mount Hope Magazine, and Columbia Journal. 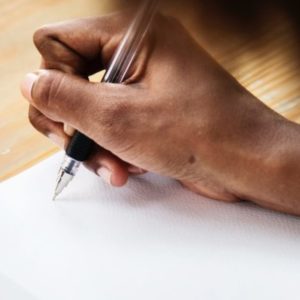 Before wokeness became a hashtag on the internet, there was a refrain on Erykah Badu’s “Master Teacher,” a collaboration...