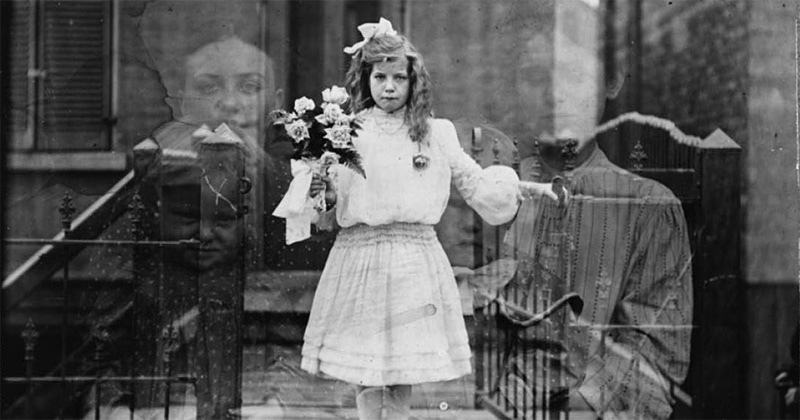 What Makes a Ghost Story Effective?

In the summer of my 36th year I made a daring change in my life and moved to a farming community in the Hudson Valley. I rented a 200-year-old Dutch stone house, all but empty except for the necessities. During the week days I was by myself and at night, I started to have a strange sort of dream experience. When I was on the edge of sleep, I found I could rise from the bed and float down the stairs and through the house, encountering figures who also lived there.

I never knew if they were going to be friendly or unfriendly. Sometimes one would slowly turn around and appear to notice me, but usually not. It became clear that these night figures did not exist on my terms. During some of my float-downs, the house and its environs were in a more primitive state. Once I came upon men working to build something, and one of them gave me a threatening scowl.

The other thing that happened during that time was that a friend had a late miscarriage for the seventh time. While she was in the hospital, a nurse mistakenly laid a new baby in her arms and said, “Here is your little boy.” Soon after, I wrote the story “Dream Children,” which combined my friend’s horrific experience with the story of a woman’s deep country life interrupted on weekends by the arrival of her husband with houseguests and city gossip. The woman clings fast to the weekday visits of a phantom boy who seems to be the same age as the one thrust into her arms that one time. She buttresses the validity of these night visits by reading about people like herself who can commute between worlds. From scholars, mystics, theologians, and novelists, she comes to accept that dream and reality aren’t competitors but reciprocal sources of consciousness.

Her discovery marked the beginning of my search for the kind of ghost story I myself could accept. Throughout my fiction, characters meet their ghosts, confronting them on the stairs, conversing with them while driving alone, discovering late in life that a powerful person’s spirit inhabits them. But not until Flora (2013) does a ghost keep audible company with her granddaughter throughout the entire novel. The late grandmother’s imperious comments and advice continue to guide ten-year-old Helen, influencing the child’s choices and actions.

In my new novel, Grief Cottage, 11-year-old Marcus never hears the ghost-boy, but sees him twice. Marcus sets out to court the lost soul trapped inside the ruined cottage, though he is not sure whether the ghost-boy is friendly or follows some sinister agenda of its own.

What are the hallmarks of a successful ghost story? The masterful ones are almost always founded in psychology. The ghost’s arrival usually coincides with a mental crisis in the protagonist’s life and the ghost usually affects a change in the person who has experienced the supernatural.

In Henry James’s “The Jolly Corner,” an American returns to New York after 33 years and wonders if he has made a mistake in living abroad so long. He’s determined to meet the man he would have become if he had stayed at home. When he at last corners the specter of what he might have become, the sight is so hideous that he faints. When he is found at daybreak by Alice Staverton, the devoted friend from his youth, it finally dawns on him what this woman means to him. Of the glaring, disfigured ghost Brydon tells her, “He has a million a year. But he doesn’t have you.”

In A.M. Burrage’s lesser-known masterpiece, “Playmates,” communing with ghosts also changes the character for the better. A misanthropic bachelor who treasures his solitude takes on the care of a joyless young girl who begins to play with “imaginary friends” when they move to an old country house. While the ghost-children are a comfort to the girl in her time of loneliness, the local Vicar believes the girl would develop a gift that might eventually harm her if she continued to see and converse with “wretched souls.” The bachelor makes arrangements to send the girl off to school, but when she leaves, he begins to feel shy little presences in the empty house. “Don’t be afraid,” he whispers to the ghosts, “I’m only a very lonely man. Be near me after Monica is gone.”

But in James’s “The Turn of the Screw,” an insecure young governess, is undone by her experience, causing the death of one of her charges by her hysterical insistence on the presence of the ghosts. In Chekhov’s “The Black Monk” too, an exhausted young scholar, (“Andrey Korvin, MA”) is bewitched by a monk in black robes who floats across the landscape to soft-talk him into what he must do next. The murmurings of the black monk destroys the happiness of the loving family Kovrin has married into, and finally destroys Korvin. (“The monk floated past and stopped in the middle of the room. ‘Why didn’t you trust me?’ he asked reproachfully, looking affectionately at Kovrin. ‘if you had trusted me when I told you that you were a genius, you wouldn’t have spent these two years so miserably, so unprofitably.’”

A really effective ghost story rests solidly within the purview of the stuff of real life, the grounding details of everyday routines. Henry James, who liked to speak of “the terrors of the cheerful country home,” said that a good ghost story must be “connected at a hundred points with the common objects of life.” In the stories cited above there are houses and furniture and routines and a specific milieu. 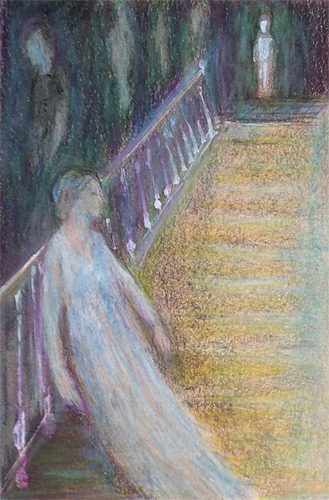 Connoisseurs of ghost stories maintain that the supremely satisfying ones leave a window open for the possibility of an as-yet unknown reality. Walking home after his meeting with the Vicar in “Playmates,” the bachelor realizes he looks no longer into the face of a blank and featureless wall but through a curtain beyond which there lie further manifestations of life. (“His footfalls on the ground beat out the words: ‘There is no death. There is no death.’”)

Since my “float-downs” four decades ago in the 200 year old house, I have never again seen people in another dimension. Like my character in “Dream Children,” I read the books she read in order to understand what was happening to her, and I came to the same conclusion: “dream and reality aren’t competitors but reciprocal sources of consciousness,” and, “I understood that when the mystics tell us that the mind is a place, they don’t mean it as a metaphor.”

So, do I believe in ghosts? I believe in the experience Brydon had in “The Jolly Corner,” and I believe Monica learned to play from the little girls who answered her need, and I believe the governess saw the ghosts of the former servants. And I believe I did see those people, in all their particulars, going about their business in the history of that old house. In an unusually receptive state of consciousness, brought on by deep country silence and the shock of my daring break from a safer life, I was somehow able to journey from my bed and float around the outskirts of their world.

While I was writing Grief Cottage, I studied the James stories closely to see what language he chose to describe the actual confrontations with the ghosts. I copied down passages: The governess thinks when she sees the man on the tower: “What arrested me on the spot was the sense that my imagination had turned real . . . ” And when Brydon in “The Jolly Corner” crosses into the territory of his ghost, “he tasted a sensation more complex than had ever before found itself consistent with sanity.”

Something in my personal development must have set me up to seek a concept of personality that includes other dimensions of being. I expect, I hope, that characters in my books will continue to confront their ghosts and bring me back their findings. When Marcus as an adult finally tells a close friend about the ghost-boy in the ruined cottage, the friend says: “It’s like he needed you and you needed him and there was some kind of collapse in time . . . it’s got something to do with how time interacts with spirit, only you’re going to have to figure it out . . . “

Gail Godwin is a three-time National Book Award finalist and the bestselling author of The Grief Cottage and critically acclaimed novels including Violet Clay, Father Melancholy's Daughter, Evensong, The Good Husband, and Evenings at Five. She is also the author of The Making of a Writer, her journal in two volumes (ed. Rob Neufeld). She has received a Guggenheim Fellowship, National Endowment for the Arts grants for both fiction and libretto writing, and the Award in Literature from the American Academy of Arts and Letters. She lives in Woodstock, New York. 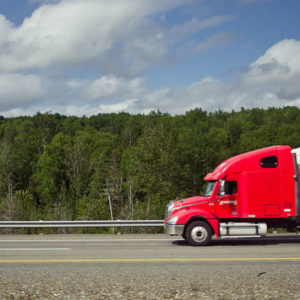 I've lived a good part of my life in an odd netherworld. Working people are suspicious of my diction and demeanor,...
© LitHub
Back to top
Loading Comments...