Writing Fiction came about by a fluke. In 1972, I left England and Sussex University, where I had been teaching such things as Chaucer, Romantic Poetry, and Tragedy, and came to Florida State, where as a novelist and new hire in the embryonic Creative Writing Program I was assigned “Narrative Techniques,” the first course in fiction.

I had no idea how to teach it. I was familiar with the form of the workshop from my undergraduate days at Barnard, but this was intended as an instructional first course, including lectures and the discussion of concepts. I inherited the subject from Michael Shaara, who was apparently very successful at it, but he had left as guidance no more than a couple of pages of cryptic notes. There were (it is difficult now to imagine) virtually no books to serve as guidance. Strunk and White’s Elements of Style was a mainstay, but it took, as White notes, a barking tone toward its writer novices. I reread E. M. Forster’s lovely Aspects of the Novel, but it was mostly too abstract and too advanced for my Florida 18-year-olds. I combed Eric Bentley’s The Life of the Drama for clues to plot. I read another how-to, the name and author of which I no longer remember, but which memorably assured me that women use a lot of exclamation points but men should not.

For a few years I floundered toward coherence in the course, until it occurred to me that such concepts as character, plot, point of view, and setting—what we discussed in a literature class—were of necessity elements put there by the writer. If I could turn around and consider how the writer went about that putting—how do you develop a character, shape a plot, settle on a point of view, produce an atmosphere that is organic to the whole and not mere description?—I should be able to direct an intelligible and helpful classroom conversation. And, gradually, it worked. By the end of the 70s my students were learning how to ask about technique, critique each other’s style and structure, and adopt the vocabulary of craft as their own.

My novels were at that point being published by Little, Brown in America, and my editor was friends with an editor in its textbook division who was headed to Tallahassee for a sales talk. My editor told Chris Christensen to take me out to lunch, which he did, and over shrimp and hush puppies I described my dilemma and my solution. Now that the burgeoning of creative writing programs was well established in America, I asked, did he think there might be a market for a college text in fiction writing? He said, “I don’t know, what do you think?” I said, “I don’t know, what do you think?” By the end of the meal he said, “Let’s try it”—which was all the contract I had when, the following year, as I guest-taught at the Iowa Writer’s Workshop, I put together the first draft of a college textbook at first called Narrative Techniques.

There has of late been a good deal of pushback against the explosion of creative writing as a college subject. The negative view has appeared in print, in both literary and glossy magazines and some full books, such as Mark McGurl’s The Program Era; the answering and further-analyzing collection After the Program Era, edited by Loren Glass; and MFA vs NYC, edited by Chad Harbach. It comes from academics who think creative writing undeserving of university credit, from writers who disdain academia, from celebrity authors who count fame as the only true success, and from self-styled outliers who disdain the notion of a “degree” as inimical to the calling. Such polemics may argue that only fiction writers read fiction, only poets read poetry, and only writers for “little” or literary magazines read those magazines, assuming that such closed communities must be pointless. Like the parents of many of my former students, they may argue that writing is a dead end if you can’t make a living or a fortune at it.

All this is in error. We are, I believe, at a point in history where, the computer and the internet having reintroduced writing as a constant activity, the elite again becomes the demotic, with both good and bad consequences. In the 18th century, education was not widespread, but all the educated in the Western world wrote. People “naturally” learned to write by reading, though it was universally assumed that the more specialized arts—music, painting, sculpture—required apprenticeships and conservatories. Women of means, locked out of the profession of writing altogether, wrote diaries and letters often and at length—luckily, since much of our sense of daily life is now retrieved from such of their manuscripts as have survived.

A university has two distinct purposes. One is to get its students ready for life in the “real” world. The other is to keep, in a cool dry place, the knowledge and wisdom that the real world isn’t buying at the moment.

Over the last two centuries, society has experienced the increasing professionalization of authorship through agenting, marketing, and the takeover of the publishing industry by corporations not primarily concerned with literature. Film, television, and the internet have all had roles in promoting fame and fortune—or rather, celebrity and money—as the proper goals of authorship. At the same time and at the same pace, the respect with which society regards literature has declined. (Norman Mailer thought he could change the world. What contemporary author would make that claim?) Women of the 1950s broke into the writing profession at just the moment when corporatization began to sour the industry. Movies and the sitcom became the major forms of storytelling. The popular authors of the Saturday Evening Post and the Ladies Home Journal became less popular, those sources of authorial income dried, and when some colleges and universities tried to teach their storytelling skills, the schools were decried as fostering pop and pap.

In the face of this, it amazed me, as a young teacher, to find that my (by and large poorly read) students were passionate about writing fiction. What was it that motivated them? Was it a superficial and selfish fantasy? Or did they somehow perceive that their passive absorption of the sitcom and the soap had left them wanting? Was this a lazy alternative to academia, or were we in fact the monks of the new dark ages, keeping the culture alive?

An answer is suggested in two interestingly contrasting articles that appeared in the Atlantic in December 2017: “What’s College Good For?” by Bryan Caplan, and “The Desirability of Storytellers” by Ed Yong.

Caplan, a professor of economics, argues that college graduates earn more than non-college-educated people mainly because of the “signaling” of preexisting traits, not anything they’ve learned; a student who completes a PhD in philosophy, for example, has shown herself to be “brilliant, diligent, and willing to tolerate serious boredom,” all eminently employable traits. That philosophy might be a passion, or a desirable study in itself, does not figure in Caplan’s system of values. “Why do English classes focus on literature and poetry instead of business and technical writing?” he asks, not rhetorically. He complains that students spend 12 hours a week “socializing with friends.” It does not occur to him that, for young adults living on their own for the first time, socializing represents the process of socialization.

Yong, on the other hand, recounts the experience of social scientists among preliterate societies of hunter-gatherers in the Philippines and Bolivia. Among the Tsimane of Bolivia, they showed that stories conveyed important information about food, weather, and animal behavior, as well as reinforcing norms and ethics. Among the Agta of the Philippines, they found to their surprise that storytellers were likely to be judged the most desirable living companions and mates, enjoying prestige greater than the best hunters and warriors. An analysis of the tales they told suggested that for nomadic people who had neither religion nor government, which rely on punitive methods of instilling good citizenship, it was the stories’ function to promote cooperation, gender equality, and the cementing of social bonds.

A university has two distinct purposes. One is to get its students ready for life in the “real” world. The other is to keep, in a cool dry place, the knowledge and wisdom that the real world isn’t buying at the moment. In a world of global capitalism, I would argue, the desire to write well is to be celebrated, and creative writing must remain a college subject because, like philosophy and history (and similarly unremunerative studies), it is neither taught nor learned without pedagogical effort.

People read a great deal, but they do not read skillfully written and edited text as a part of daily life. Of literary readers there may be precious few, but the computer and the internet have made writers of all the generations present and to come. To write emails, messages, posts, tweets, and blogs is all to the good. To write a grammatically accurate post, an alliterative tweet, a metaphorical blog entry, will salvage just a little of our culture. To recognize the tools of grammar, alliteration, and metaphor will salvage a little more.

In Sapiens: A Brief History of Humankind, Yuval Noah Harari points out that it is not language itself but the related capacity to imagine what is not immediately present that distinguishes the human species. To imagine what is not immediately present allows us spirituality, nationhood, commerce, and law, and it is of course the essence of story. To write better and better stories may promote cooperation, gender equality, and the cementing of social bonds. If an aspiring writer has natural talent, so much the better. If she gets published, even paid—wonderful. Her mother is probably right that she’ll need a day job. She may even find one with her literary skills, in PR, marketing, or law. (My best friend in college, hoping to break into journalism, ended up as the first female chief justice of the Supreme Court of New York . . .) But in any case, it is good for a full-blooded life and good for the culture that human beings should continue to study the craft of fiction. 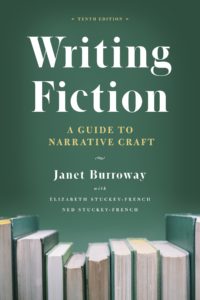 Janet Burroway is the author of plays, poetry, children’s books, and eight novels, including The Buzzards, Raw Silk, Opening Nights, Cutting Stone, and Bridge of Sand. Her collection of essays, A Story Larger Than My Own, was also published by the University of Chicago Press. She is Robert O. Lawton Distinguished Professor Emerita at Florida State University. She lives in Chicago and Lake Geneva, Wisconsin. 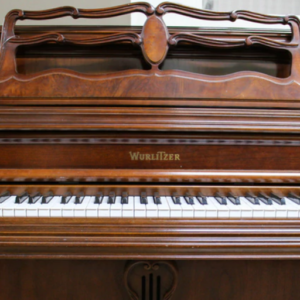 Advertised in the laundry room, a Wurlitzer spinet from ’46, abandoned by a tenant who couldn’t make the rent: The...
© LitHub
Back to top
Loading Comments...