What is the Future of Film in Gaza?

Another feature of Gaza’s cultural life historically is cinema and film, and there have been consistent, albeit largely unsuccessful, attempts to revive it. The first time I ever went to a cinema was in February 2020 in Arizona. My cousin Abdallah, who was born in Saudi Arabia the same year I was born in Gaza, invited me to stay with him for two days in Tempe, where we spent some time walking in the mountains and then watched a film in a nearby cinema. It was a crucial experience for me. I could sit next to my cousin in a hall full of people and watch a newly released film on a screen bigger than our orange tree.

Back in Gaza and during my studies at the Islamic University of Gaza between 2010 and 2014, I walked around in my free time. I always passed by a long-abandoned building with broken windows and some burn marks on its outside walls. Empty cans, plastic bags, and dust covered its entrance. Every time I passed, I would see a young man selling watermelons, batteries, and flashlights. The building was Al-Nasr Cinema. You needed to look carefully to read the fading letters on the sign in front.

Unfortunately, there is no definitive record of the history of cinema in the Gaza Strip except for stories in the memoirs of some well-known Palestinian figures and what has been circulated orally from one generation to another. Most Gazans will tell you that the first cinema in the Gaza Strip opened in 1944, when Hajj Rashad Al-Shawwa, former mayor of Gaza, obtained a license for Al-Samer Cinema.

He brought white sheets from the Palestinian city of Majdal for a screen and curtains. He purchased equipment from Europe, and films were brought from Egypt by train. People sat and watched films while planes flew overhead during World War II. Among the most famous visitors were the singer/composer Farid al-Atrash and his sister, the singer Asmahan. The cinema was packed with people eager to see them.

After the 1948 Nakba, UNRWA showed films aimed at the refugee audience, using mobile projectors. The agency transported these cinemas-on-wheels to the different camps and showed a variety of films, some about personal hygiene and health.

“Suddenly the world of cinema was opened to us. To an impoverished boy from a refugee camp, it was an amazing thing.”

After 1953, Al-Nasr Cinema expanded to three thousand square meters to accommodate the demand. Following the 1967 war, some cinemas closed temporarily since they relied on Egyptian films and companies, which Israel prohibited. Thereafter, all films came from Israel. During the 1970s, the number of cinemas continued to grow, reaching ten in total. The most well known were Al-Nahda, Al-Salam, and Sabrin in Rafah; Al-Huriyya in Khan Younis; and Al-Nasr, Al-Jalaa, Al-Amer in Gaza City (Al-Samer Cinema in Gaza City was closed in 1969, following the 1967 war). All of the cinemas were privately owned and there was a healthy competition among them.

However, the 1980s witnessed the escalation of mosque-led opposition to these cinemas. Some buildings were destroyed and others closed permanently, effectively restricting if not ending the presence of film in local life. Najah Awadallah, whose filmmaking credits include The Ember Holder and Brides, believes that religious groups take advantage of the community’s lack of exposure to cinema when they claim that film leads to decadence and moral corruption. She argues, “How can we have cinema in Gaza when our films are subjected to government censorship and sections cut out, in the event that they are allowed to be shown in the first place?”

Another producer-director from Gaza, Khalil al-Muzaien, recounted: “When cinema first came to Rafah, it was as if fireworks went off in the neighborhood. There was no television or electricity at that time, and the people of the towns would gather around a single radio and listen. Suddenly the world of cinema was opened to us. To an impoverished boy from a refugee camp, it was an amazing thing. I used to scavenge copper from abandoned British rubbish left behind from the mandate on the border between Rafah and Egypt and sell it at a low price so that I could make enough to buy a ticket to the cinema.” That was in the 1970s.

Al-Muzaien added: “Religious incitement against these cinemas started early on with the ascendance of political Islam in its fight against the secularists and leftists whose military presence was waning. Hence, political Islam groups focused on social change in the late 1970s and showed their strength in the 1980s by burning the cinemas and converting others into club houses and wedding halls. Also, the advent of television reduced people’s interest in the cinema at the time.”

Another important cinema was Al-Amer. Established in 1952, it closed down in 1996, when a group attacked and sabotaged it. Al-Amer Cinema used to show films twice a day, two days a week/Friday and Saturday/so that Gazan workers could watch them with their families. Layla Sarhan, a Palestinian critic and film director, observed: “With the rise of the Muslim Brotherhood in Egypt in the mid-seventies, and when its ideas appeared in the Gaza Strip, calls and incitement against cinemas by extremists and Islamists increased in the early 1980s. Cinemas were attacked, destroyed, and burned, such as what happened to the Al-Amer Cinema, the Al-Samer, and the Al-Nasr Cinema in the mid-nineties. They considered the presence of cinemas as an offence to Islamic values.”

Sheikh Abdullah al-Masri, a founder of the Salafi Dawah in Gaza, heads the Qur’an and Sunnah Society in Khan Younis in southern Gaza, which used to be the site of Al-Huriyya Cinema. Sheikh Masri told Al-Monitor that the cinema showed pornographic films that did not fit with its conservative surroundings. This prompted the religious community to gather the signatures of university professors, doctors, government officials, families, and clerics to close the cinema and convert it into the headquarters for the Qur’an and Sunnah Society.

Sheikh Masri recalls what transpired, saying: “In 1985, we heard that al-Huriyya Cinema was showing a certain film. We gathered in Ahl al-Sunnah Mosque located 150 meters away from the cinema and agreed to storm it. We smashed the equipment and tore the screen, but we did not set fire to anything or injure anyone.”

In Gaza, culture is not only a site of expression but also a site of oppression imposed both by external and internal forces.

Islamist opposition continued after Hamas assumed control of Gaza in 2007. One notable example of the difficulties the community encountered is found in the account of the Red Carpet Human Rights Film Festival. The festival was established in the Shuja’iyya neighborhood in 2015, one year after Israel’s fifty-one-day war on Gaza. The theme of this inaugural festival was “Gaza Dignity.”

At that time, Amer Cinema was opened for cleaning; one could see posters of Egyptian, Indian, and Western films hanging on the dusty and burnt walls. Days before the festival started, volunteers worked hard to get the film theater ready. The initial plan was to hold the screenings at the theater, but the owners reversed the decision and insisted on holding the opening in front of the theater instead. After that event, no one in the Hamas government commented whether there was any plan to reopen the cinema.

A year later, the festival was held again. Al-Muzaien writes about his experience:

We placed a very big screen in Shujaeeya and there were 2,000 seats for guests and attendants. However, the number of attendants reached 12,000 people. After the success of last year, we wanted to do the festival in Mina (Gaza’s old airport), and we agreed with the artist Muhammad Assaf to launch the festival. The festival’s slogan was “We Want to Breathe; We Want to Live.” Our message was not only about the siege and the occupation, but was about Hamas limits as well. We want freedom of expression. We filed a permit request to the Ministry of Culture. They sent it to security.

During the period of preparation for the festival, security summoned me while I was in the yard of the “Unknown Soldier.” I was with my seven-year-old daughter, Yara. A military vehicle stopped and took us to the police station. They told me, “We are not against the festival, but our problem is in gathering the huge number of people and in mixing males and females.”

The following day, they asked to watch all the films. The Ministry of Culture intervened that night and asked me to bring the films to the Ministry. They gave orders about what films to show, and what scenes to remove. They prevented us from using the Mina area and banned the festival activities in the streets. They only allowed us to work in the hall of Rashad Al-Shawwa Center, which only accommodated 1,500 seats. They asked me to sign a pledge to separate women and men in the hall.

Two of Al-Muzaien’s films were banned by the Hamas authorities.

The first, Masho Matook, was banned in 2010 because it showed, for a few seconds, a young, attractive Palestinian woman in a dress with no veil, walking in front of Israeli soldiers, who kept watching her and whistling at her as she moved. In 2013, another film, titled 36 mm, was banned because it was said to “slander the Muslim Brotherhood.”

Yet, despite the challenges, the Red Carpet festival continued to be held. During its fifth year, whose theme was “I’m Human,” “300 films worldwide were submitted, from which only 45 films were selected and showcased,” according to the filmmaker Montaser al-Sabee.

In an interview with Al-Aan TV in 2010, Adnan Abu Beed, the former director of Al-Nasr Cinema, was found selling onions and garlic on the streets of Gaza: “I lost my work because the cinema has been closed. Look how different my customers are now,” Adnan sadly explained.

In Gaza, culture is not only a site of expression but also a site of oppression imposed both by external and internal forces. Israel bans books and the Islamists ban music and film. The repression has been and continues to be met with popular critique and resistance/sometimes at considerable personal cost/that both Israel and Hamas want to silence. What do such restrictions and lack of experimentation and access to other ideas, forms of creativity, and ways of thinking mean for Gaza’s people going forward? How can their vision be nurtured? 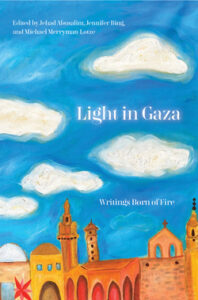 Excerpted from Light in Gaza: Writings Born of Fire, published by Haymarket Books.

Mosab Abu Toha is a Palestinian poet, scholar, and librarian who was born in Gaza and has spent his life there. A graduate in English language teaching and literature, he taught English at the United Nations Relief and Works Agency (UNRWA) schools in Gaza from 2016 until 2019, and is the founder of the Edward Said Library, Gaza's first English-language library. Things You May Find Hidden in My Ear is his debut book of poems.

Giving People What They Want: A. Natasha Joukovsky on Her Debut Novel 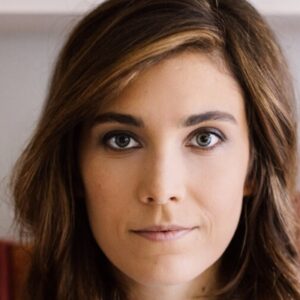 Giving People What They Want: A. Natasha Joukovsky on Her Debut Novel