Something happened in Europe at the start of the 20th century. What happened was, human beings began to sense the reality of hyperspace. The thing called hyperspace, in movies like Star Wars, the thing that you reach by traveling faster than light—it started to shimmer into existence in the early 1900s. Like a gorgeous mirage, hyperspace wavered into being, in philosophy, science, literature and art. The science is Albert Einstein’s general theory of relativity. There are two kinds of art I want to share. First, the water lily paintings of Claude Monet. Secondly, there’s that amazing innovation in narrative prose—the stream of consciousness. Let’s start with the paintings. They make it so obvious.

The Orangerie is a pair of oval-shaped rooms in the Jardin des Tuileries in Paris. In these rooms, you can visit Claude Monet’s astounding water lilies paintings. It’s more than visiting. It’s being inside them. It’s not an experience you can forget. Immersive, strangely anticipatory of VR, you find yourself surrounded by gigantic ovals of color. An oval is a circle that’s been squeezed, just like spacetime isn’t totally regular but is squeezed and stretched by gravity. An oval is also an egg, an obvious container that isn’t just a container, but a living habitat for an embryo. The visitors are the embryos. And Monet’s paintings are the yolk, a gorgeous, mauve-blue-green yolk.

Floating in the yolk are little blobs, the water lilies. The water lilies appear not as objects in empty space. They melt into the water. It’s as if they are manifestations of the warp and flow of Monet’s beloved pond at Giverny. It’s as if the water lilies are an intrinsic part of their habitat: go figure. Ecological thought holds this to be true, a truism, even. But imagine what it was like to see that, first. You’re Claude Monet, and you’re seeing the slowly rippling, smooth, transparent liquid of your pond at Giverny. The pond contains so much else—water weeds, shadows, the sky… and water lilies.

The way Monet paints them, it is as if the lilies emerge out of this medium. They don’t just sit in it or on it. It is as if they are symptoms of the water itself, growing out of the mauve or blue or green liquid.

It’s not evenly always the same. It has contours. It is palpable. It is creamy.

Think about it. It’s not like the lilies are dots or solid objects. They appear more like liquids, liquids that are mingling with the water of the pond. And that’s how Albert Einstein imagines planets, stars and galaxies. The things that inhabit our universe are just like the water lilies in Monet’s pond.

This is just like how Einstein imagines spacetime. It’s a rippling, flowing liquid that emerges from the massive qualities of things in the universe. So tight is the connection that it’s correct to say that stars and planets and black holes are pockets and wells and holes in spacetime. And you can say the inverse: that spacetime is a deep property of the things that make up the universe. Pond, lilies, lilies, pond.

It’s also just like how some experimental novelists imagined prose. When I teach my how-to-read-literature classes, I start with the idea that prose is really poetry with really, really long lines that have to be turned into parcels called paragraphs (nowadays anyway). It seems easy and helpful to do so. But at some stage there’s a flip, when I determine the students are ready for it, and instead of teaching prose as really long poetry, I teach prose as the overall medium which sometimes can become “hotter” or more “lumpy” or “reified” as poems. On this view, poems are little islands like planets or water lilies in a more general liquid like a pond or spacetime. “Prose” is the basic stuff. Water is the basic stuff. Spacetime is the basic stuff. Hyperspace is the basic stuff—hyper no longer in the sense of beyond, but in the sense of concentrated or condensed, like condensed milk or consommé.

There was a special kind of prose that arose in English literature around 1900, the kind we call stream of consciousness. We associate it most with the work of Virginia Woolf and James Joyce. Of the two of them, Woolf is the most radical. Her streams of consciousness appear wide enough to contain more than one person’s mind, as if everyone were capable of flowing into everyone else through some kind of telepathy. Woolf’s genius was to push a logical consequence of narrative realism to its limit. Realism, as she herself argued, isn’t about detailed descriptions of things. It’s about a feeling of reality.

Through a brilliant narrative technology that Jane Austen developed (it’s called untagged indirect speech and it would sadly be a digression to describe it in detail), the reader can have something like a telepathic-seeming experience with a totally unreal person, a fictional character. In this way all realist stories are ghost stories. But if you can get inside one character’s head, why not several, all at once? And since “mind” or “soul” isn’t really a kind of smoke trapped in a bottle (the soul or mind versus body dualism of Medieval patriarchy), why not?

The point is, stream of consciousness shows you something very interesting. It shows you that along with thoughts, there’s an entity that is having the thoughts, in which the thoughts are appearing. It’s not so much what you’re thinking, but the fact that you’re thinking it. The fact that your thoughts are taking place “within” a liquid-like consciousness.

Hyperspace is in a way regular old space, but imagined as a phenomenon along the lines of Edmund Husserl, the philosopher who realized that ideas and thoughts were also “objects.” Hyperspace is imagined as a thing with specific characteristics, not just a blank slate. We tend to think that space is supposed to be what contains all other phenomena. It’s as if we haven’t yet figured out how to fold Einstein into our lives. But we ought to, and the water lilies and streams of consciousness show us how.

But if space itself isn’t different from other phenomena such as planets and people reading a book called Spacecraft, it means that it’s not omnipresent, and that omniscience and omnipotence are therefore impossible. It’s not evenly always the same. It has contours. It is palpable. It is creamy. The way hyperspace is visualized as kind of roaring blue and white cream is a wonderful sign of real political, intellectual and artistic progress. The creamy phenomenology of hyperspace means that space is palpable, not different from galaxies and gnus. It means that the “whole” of the universe is one thing, the same as its parts (black holes and boots), so that the whole is amazingly “less” than the sum of its parts. It’s not a scary infinite mouth at all. It’s not swallowing everything and being ontologically bigger than everything. It’s a swirl with blobs called quasars and cockatoos.

The term hyperspace was first coined in 1867. Thirty years later, the term had evolved to suggest the two essential ingredients of the geometry of the luminous ambient realm I am discussing here. First, hyperspace can refer to any space of more than three dimensions. Spacetime is four-dimensional since time is treated as a fourth dimension. Secondly, hyperspace can refer to non-Euclidean space. Einstein used the geometry that the mathematician Carl Friedrich Gauss (1777–1855) had devised in order to describe it, because like Monet’s pond, spacetime is curved, rippling, flowing.

Gauss had figured out how to create an entirely new geometry, based on curved surfaces. If you draw two parallel lines on a piece of paper, they will never meet—they will “meet at infinity” as the Euclidean saying goes. If, however, you take a felt tip pen and draw two parallel lines on an orange, they will eventually meet—at the navel. This is Gaussian geometry. It was pivotal in Einstein’s description of spacetime. To get the notion of squishy, rounded spacetime across, his text charmingly refers to “reference mollusks,” as if spacetime were made of mussels and oysters. The aliveness and wetness of these images is what hyperspace is all about. Spacetime isn’t like Newtonian space at all, frigid and dry. Spacetime is damp, and hyperspace is also luminous and glistening. 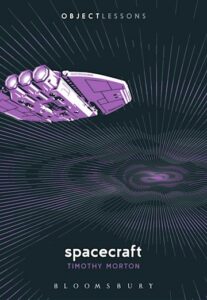 Adapted from Spacecraft, by Timothy Morton, which will be published in Bloomsbury’s Object Lessons series on September 23.

Timothy Morton is Rita Shea Guffey Chair in English at Rice University, USA. They are the author of 16 books, including Being Ecological (2018) and Humankind: Solidarity with Nonhuman People (2017), and 200 essays on philosophy, ecology, literature, music, art, architecture, design and food. www.ecologywithoutnature.blogspot.com @the_eco_thought 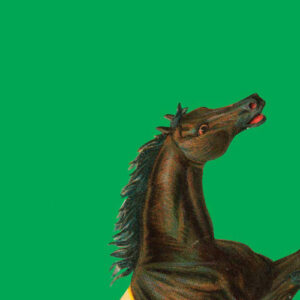