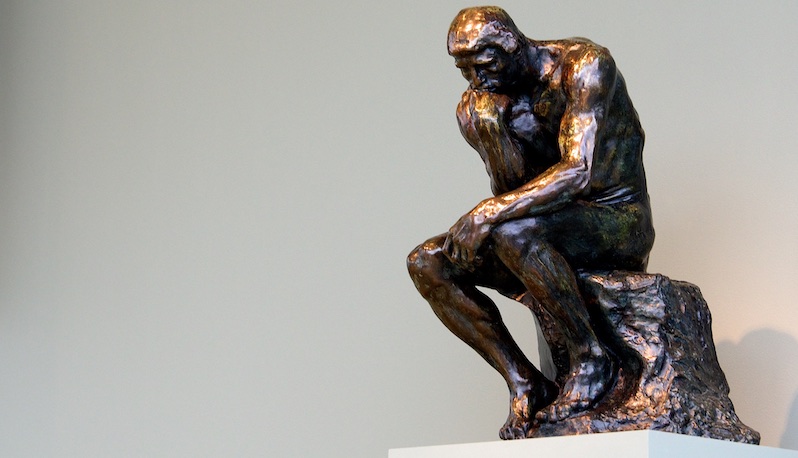 What is a Philosopher? A Laughingstock, an Absentminded Buffoon?

Simon Critchley is Unafraid to Ask the Hard Questions

There are as many definitions of philosophy as there are philosophers—perhaps there are even more. After three millennia of philosophical activity and disagreement, it is unlikely that we’ll reach consensus, and I certainly don’t want to add more hot air to the volcanic cloud of unknowing. What I’d like to do is to kick things off by asking a slightly different question: What is a philosopher?

As Alfred North Whitehead said, philosophy is a series of footnotes to Plato. Let me risk adding a footnote by looking at Plato’s provocative definition of the philosopher that appears in the middle of the Theaetetus, in a passage that some scholars consider a “digression.” Far from being a footnote to a digression, this moment in Plato tells us something hugely important about what a philosopher is and what philosophy does.

Socrates tells the story of Thales, who was by some accounts the first philosopher. He was looking so intently at the stars that he fell into a well. Some witty Thracian servant girl is said to have made a joke at Thales’s expense—that in his eagerness to know what went on in the sky he was unaware of the things in front of him and at his feet. Socrates adds, in Seth Benardete’s translation, “The same jest suffices for all those who engage in philosophy.”

What is a philosopher, then? The answer is clear: a laughingstock, an absentminded buffoon, the butt of countless jokes from Aristophanes’s The Clouds to Mel Brooks’s History of the World: Part I. Whenever the philosopher is compelled to talk about the things at his feet, he gives not only the Thracian girl but the rest of the crowd a belly laugh. The philosopher’s clumsiness in worldly affairs makes him appear stupid or at least “gives the impression of plain silliness.” We are left with a rather Monty Pythonesque definition of the philosopher: the one who is silly.

But as always with Plato, things are not necessarily as they first appear, and Socrates is the greatest of ironists. First, we should recall that Thales believed that water was the universal substance out of which all things were composed. Water was Thales’s philosopher’s stone, as it were. Therefore, by falling into a well, he inadvertently pressed his basic philosophical claim.

What is a philosopher, then? The answer is clear: a laughingstock, an absentminded buffoon.

There is a deeper and more troubling layer of irony here, however, that I would like to peel off more slowly. Socrates introduces the digression by making a distinction between the philosopher and the lawyer, or what Benardete nicely renders as the “pettifogger.” The lawyer is compelled to present a case in court, and time is of the essence. In Greek legal proceedings, a strictly limited amount of time was allotted for the presentation of cases. Time was measured with a water clock, or klepsydra, which literally steals time, as in the Greek kleptes, a thief or embezzler. The pettifogger, the jury, and, by implication, the whole society live with the constant pressure of time. The water of time’s flow is constantly threatening to drown them.

By contrast, we might say, the philosopher is the person who has time or who takes time. Theodorus, Socrates’s interlocutor, introduces the digression with the words, “Aren’t we at leisure, Socrates?” The latter’s response is interesting. He says, “It appears we are.” As we know, in philosophy appearances can be deceptive. But the basic contrast here is that between the lawyer, who has no time, or for whom time is money, and the philosopher, who takes time. The freedom of the philosopher consists in either moving freely from topic to topic or simply spending years returning to the same topic out of perplexity, fascination and curiosity.

Pushing this a little further, we might say that to philosophize is to take your time, even when you have no time, when time is constantly pressing at your back. The busy readers of The New York Times will doubtless understand this sentiment. It is our hope that some of them will make the time to read The Stone. As Wittgenstein says, “This is how philosophers should salute each other: ‘Take your time.’ ” Indeed, it might tell you something about the nature of philosophical dialogue to confess that my attention was recently drawn to this passage from Theaetetus in leisurely discussions with a doctoral student at the New School, Charles Snyder.

Socrates says that those in the constant press of business, like lawyers, policymakers, mortgage brokers and hedge fund managers, become “bent and stunted” and are compelled “to do crooked things.” The pettifogger is undoubtedly successful, wealthy and extraordinarily honey-tongued, but, Socrates adds, “small in his soul and shrewd and a shyster.” The philosopher, by contrast, is free by virtue of otherworldliness, by the capacity to fall into wells and appear silly.

Socrates adds that the philosopher neither sees nor hears the so-called unwritten laws of the city—that is, the mores and conventions that govern public life. The philosopher shows no respect for rank and inherited privilege and is unaware of anyone’s high or low birth. Nor does it occur to the philosopher to join a political club or a private party. As Socrates concludes, the philosopher’s body alone dwells within the city’s walls. In thought, the philosopher is elsewhere.

Nothing is more common in the history of philosophy than the accusation of impiety.

This sounds dreamy, but it isn’t. Philosophy should come with the kind of health warning one finds on packs of European cigarettes: philosophy kills. Here we approach the deep irony of Plato’s words. Plato’s dialogues were written after Socrates’s death. Socrates was charged with displaying impiety toward the gods of the city and with corrupting the youth of Athens. He was obliged to speak in court in defense of these charges, to speak against the water clock, that thief of time. He ran out of time and suffered the consequence: he was condemned to death and forced to take his own life.

A couple of generations later, during the uprisings against Macedonian rule that followed the death of Alexander the Great in 323 BCE, Alexander’s former tutor, Aristotle, escaped Athens, saying, “I will not allow the Athenians to sin twice against philosophy.” From the ancient Greeks to Giordano Bruno, Spinoza, Hume, and right up to the shameful lawsuit that prevented Bertrand Russell from teaching at the City College of New York in 1940 on the charge of sexual immorality and atheism, philosophy has repeatedly and persistently been identified with blasphemy against the gods, whichever gods they might be.

Nothing is more common in the history of philosophy than the accusation of impiety. Because of their laughable otherworldliness and lack of respect for social convention, rank and privilege, philosophers refuse to honor the old gods, and this makes them politically suspicious, even dangerous. Might such dismal things still happen in our happily enlightened age? That depends on where one casts one’s eyes and how closely one looks.

Perhaps the last laugh is with the philosopher. Although the philosopher will always look ridiculous in the eyes of pettifoggers and those obsessed with maintaining the status quo, the opposite happens when the non-philosopher is obliged to give an account of justice in itself or happiness and misery in general. Far from being eloquent, Socrates insists, the pettifogger is “perplexed and stutters.”

One might object that ridiculing someone’s stammer isn’t a very nice thing to do. Benardete rightly points out that Socrates assigns every kind of virtue to philosophers apart from moderation. Nurtured in freedom and taking their time, there is something dreadfully uncanny about philosophers, something either monstrous or godlike, or, indeed, both at once. This is why many sensible people continue to think the Athenians had a point in condemning Socrates to death. I leave it for you to decide. I couldn’t possibly judge. 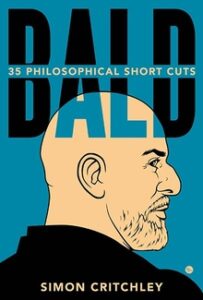 Simon Critchley is Hans Jonas Professor of Philosophy at the New School for Social Research. His many books include Very Little . . . Almost Nothing, The Book of Dead Philosophers, The Faith of the Faithless, and Memory Theater. He is the series moderator of “The Stone,” a philosophy column in The New York Times, to which he is a frequent contributor. 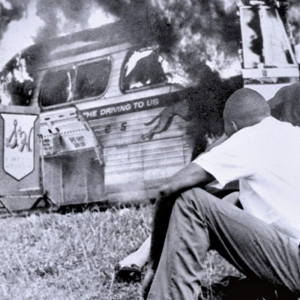 Well, what're you waiting for? These books aren't going to read themselves. * Jhumpa Lahiri, Whereabouts (Knopf) "Lahiri's...
© LitHub
Back to top
Loading Comments...