What Stories Can Teach a New Generation of Black-Indigenous Farmers

Leah Penniman on Healing the Land at Soul Fire Farm

Twenty-one pairs of dark brown eyes were glued on the instructor during agroforestry class at Soul Fire Farm’s residential program for Black-Indigenous farmers. They sat cross-legged and sprawled on the dewy grass, encircling a peach tree laden with ripe fruit, hungry for the story.

“Once upon a time,” the teacher began.

“Grandmother Pine Tree was in mourning. All her life she longed to be tall, but in the sunset of her days remained stout at just six feet. In her yearning to touch the sky, she taught herself the delicate art of drinking sunlight and inhaling carbon dioxide to create her own sugars. But, it was not enough. Now, she spilled those glucose tears of defeat onto the earth.

“Brother Mycorrhizae, his tender threadlike tubes snaking just below the surface, felt the splash of those tears and asked, ‘Why do you weep Grandmother?’

“‘I weep because I long to be tall and while I can drink sunlight, I have not found a way to drink rocks. The rocks whisper to me that they entrap the minerals I need for stature.’

“‘Oh, well why didn’t you ask earlier Grandmother? With my chemical exudes, I can sip rocks with ease, liberating the phosphorus, nitrogen, and micronutrients. Here, just soften your root hairs and let me encircle you, let us join ourselves beneath the soil and become as one. Your tears nourish me and with just a small share of your sugars in exchange, I can feed you all of the rock juice you need, scavenged from my mile-wide networks.’

“And so it was. Grandmother Pine Tree and Brother Mycorrhizae formed a super organism, linked together in a web of mutuality, sharing sugars, minerals, and messages in a subterranean dance. Grandmother grew tall and Mycorrhizae grew wide, and there was contentment for a time.

Oral storytelling as a transmitter of values is a tens of thousands of years old practice because it speaks directly to the heart.

“Now that Grandmother Pine could see out beyond the finite bounds of her forest cradle, she gazed for the first time upon the farmer’s monocropped corn fields and her heart grew heavy. She called down to Mycorrhizae.

“‘Brother, I know the humans have forgotten and forsaken us, but they are still our children and I mourn to hear their silent soils, barren of nematode banter and earthworm laughter. I am burdened to witness the erosion and near annihilation of organic matter. Do they realize they are starving their grandchildren and great-grandchildren with this harsh treatment of the land?’

“Mycorrhizae groaned. ‘While the spiteful part of me wants to rot their ungrateful cities, you Grandmother are awakening my compassion, and because you are my elder, I will help you to save them. Let me send a message through my networks to gather all the creatures of the forest. You come up with a strategy to make those lands hospitable to me, and I will travel there and join them into our network of mutuality’ And so it began.

“By nightfall, vole, hawk, bear, and rabbit arrived, followed by sparrow, coyote, groundhog, owl, and the others. They gathered at Grandmother Pine’s roots as she recounted the story and whispered the plan. Murmurs of agreement and readiness passed through the crowd of cousins.

“A dawn, the burrowing creatures brought mouthfuls of decomposing wood and forest litter to spread around the farmers fields, trapping moisture and creating habitat and food for soil organisms.

“The flying creatures dropped seeds of apple, cherry, and nut trees to intersperse with the annual crops, holding the soil in place and liberating nutrients from deep below the surface.

“The running creatures darted through the fields, legume seeds sloughing off of their furry coats as cover crop to restore the nitrogen and carbon in the soil and allow the land some rest and recovery.

“Brother Mycorrhizae saw that the land was healing and reached his fungal hyphae out to bind the farmer’s fields into the forest’s web of belonging.

“The soil inhaled sharply at the moment of her re-awakening, then exhaled the sweet smell of humates over the land. She grasped the crops firmly and pumped life-giving nutrients into their fruits.

“Grandmother Pine was again content and in the twilight of her life, released all the sugars, minerals, and nutrients she had accumulated through her long days into the network of Mycorrhizae to share with her kin in gratitude for their generosity. She allowed her body to compost and return.

“To this day, farmer’s great grandchildren bring flowers and tobacco to the resting place of Grandmother Pine and offer their songs of thanks.”

Now the instructor could have simply said to the farmers gathered, “Research shows that mycorrhizal fungi in the agroecosystem produces glomalin which binds organic matter to mineral particles preventing erosion. Further, fungal dominance supports the mining of subterranean minerals and water, and the exchange of those resources within and between annual and perennial crops. Therefore, I recommend interpersing trees in your crop fields, using leguminous cover crops, and laying down wood chip mulch as practices to encourage mycorrhizal fungi. Combined with reduced tillage, this will help you sequester carbon and make your operation climate resilient.”

So, why did they choose to tell a story rather than summarize peer-reviewed scientific articles?

It is because story contains three ingredients essential in catalyzing action: magic, inspiration, and wonder. It is also because our ancestors have long used story as the vehicle for transmitting history, cultural, and ethical codes across generations. 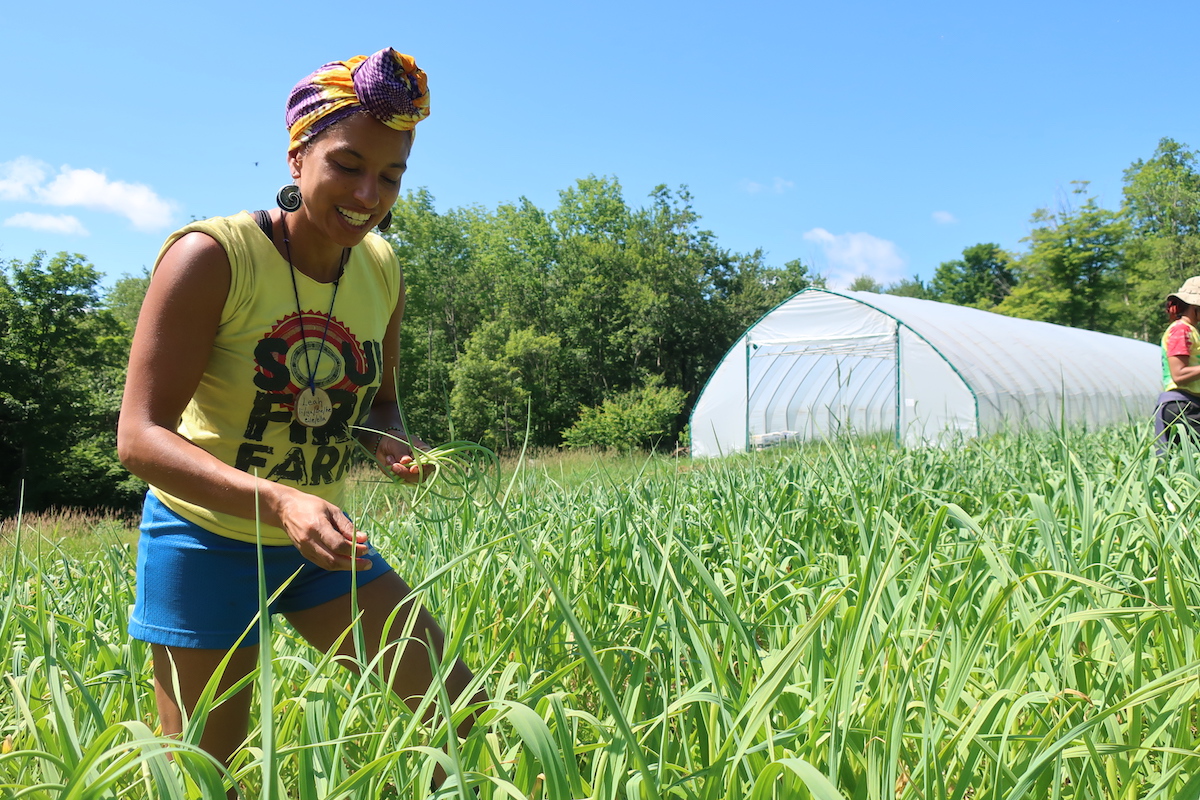 The recent IPCC Special Report on Climate Change and Land stated unequivocally that land use is critically important as both a source of greenhouse gas emissions and a climate change solution. According to the report, the land sequesters nearly one-third of all anthropogenic carbon dioxide emissions. Further, afforestation and enhancing soil carbon are the top solutions for land-based carbon removal. While these data are indispensable in defining and quantifying the task ahead, they are limited in their capacity to catalyze on-the-ground action. These data speak to the head, but bypass the heart.

Among the Mande, Mali, Hausa, and other West African societies, griots are the storytellers, musicians, historians, praise singers, and repositories of community lore. The word for griot in the Manika language is “jeli,” which also means blood, representing the intergenerational wisdom transmitted via this hereditary role. People gather around the griot to be reminded of who we are and instructed as to who we are to become.

The Inuit people use storytelling instead of scolding as preemptive discipline for children. Rather than admonish a child not to go near the ocean, parents tell a story of an ocean monster with a special pouch for stealing away wayward youth. Storytelling is also used by indigenous people to teach respect for elders, attentive listening, and conflict negotiation.

At Soul Fire Farm we use storytelling as a strategy for transmitting technical knowledge about Afro-indigenous regenerative farming practices. Each year, we welcome over 150 aspiring farmers from across the country for weeklong intensives on climate resilient, sustainable agriculture. Techniques like leguminous cover cropping, agroforestry, and mulching are essential for sequestering atmospheric carbon in the soil, but can be labor intensive and technically difficult. Leaning on the griot and oratory tradition of our Black churches, indigenous council fires, and Malika jeli history-keepers, we revive story as a soul-stirring teacher and motivator. 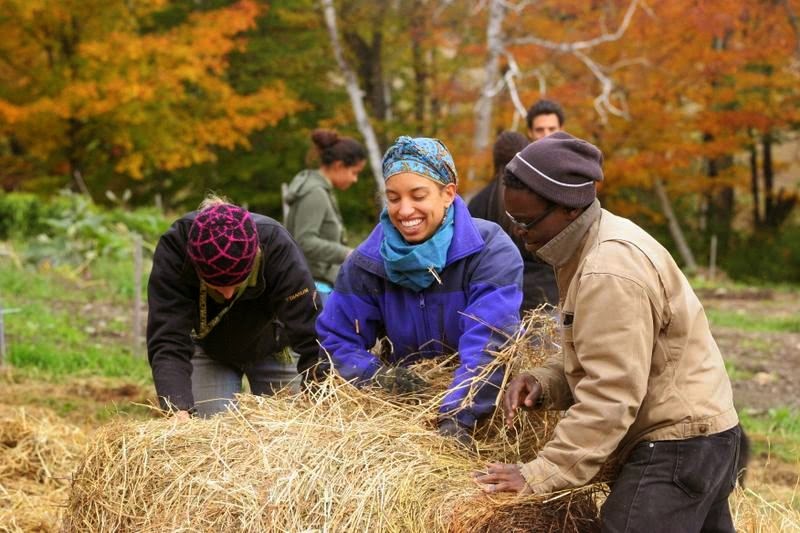 Oral storytelling as a transmitter of values is a tens of thousands of years old practice because it speaks directly to the heart. Perhaps we are “wired” to learn from story. Perhaps in using fables like “Grandmother Pine” as teaching tools, we can tap into a basal, ancient yearning in people that opens them to shifting behaviors in favor of climate health.

The bell for lunch rang, extracting the aspiring farmers from their reverie. They scrambled to their feet, brushing unwittingly against the blanket of herbal medicine that stabilized the hillside, inhaling deeply at the minty aromas released by their touch. They walked past the “milpa”—a three sisters intercrop of corn, beans, and squash planted in honor of the Mohican people, the original inhabitants of this land. They snacked on handfuls of husk cherry tomatoes, one of the dozens of vegetable crops that would be doorstep delivered for free to low-income local families. Their footsteps were supported by soils that had increased in depth 300-fold over 10 years through carbon-capture farming techniques.

As they walked, they envisioned their own future farms—where an abundance of mulch, cover crops, and intercropped trees would be established in honor of Grandmother’s story.

Leah Penniman is a Black Kreyol educator, farmer/peyizan, author, and food justice activist from Soul Fire Farm in Grafton, NY. She co-founded Soul Fire Farm in 2011 with the mission to end racism in the food system and reclaim our ancestral connection to land. Her James Beard award winning work is encapsulated in her book, Farming While Black, a love song for the land and our people.

Anne Boyer: What is the Language of Pain? 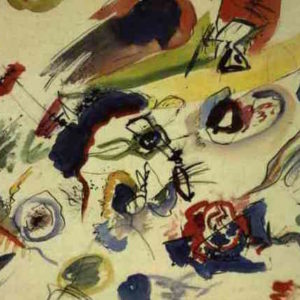 Anne Boyer: What is the Language of Pain? To be a minor person in great pain at this point in history is to be a person who feels inside their body when most people...
© LitHub
Back to top
Loading Comments...