Dana Schwartz, aka @GuyInYourMFA, on Namedropping, the Canon, and More

I started the parody twitter account @GuyInYourMFA because I was scared I would never be him. That’s the truth of it. I was 21, a pre-med college senior who just came to the life-shattering realization that she didn’t actually want to be a doctor. What I wanted to be was a writer. It was a secret, impossible dream I had barely been able to admit to myself, made ludicrous by the fact that I was a 21-year-old college senior who hadn’t yet taken a single upper level English lit course.

The Brown college campus was littered with the archetypal pretentious literary bro I sought to represent in my faux-twitter persona’s profile picture (that picture was first a random google, “man with hat,” before remembering copyrights exist and asking a friend to pose for me.) They leaned, leggy and supine along the stairs and railings of the neo-Brutalist campus library, flicking cigarette ash and staring into the distance with dark eyes over hollow, gorgeous cheekbones.

When I took my first creative writing workshop, that type of boy was there as well, namedropping authors I had never heard of. He was there in the professor who had written an acclaimed book of prose-poetry who told me that I might have a chance at eventually becoming a successful commercial writer. He was in every page of assigned reading, whispering with whiskey breath that it was too late for me, that no matter what I did, I would never be able to catch up.

I started the parody twitter account @GuyInYourMFA because I was scared I would never be him. That’s the truth of it.

And so, I took a monster and made him into a joke: I plucked the worst impulses of the literary world at its most insular, its most sexist, its most navel-gazing, and constructed a character I could control. I pretended to be the thing I thought I never could be in order to teach myself that I would be just fine, even if I never finished reading Infinite Jest.

In the five years since I created @GuyInYourMFA, here is some of what I have earned:

Everyone has pretentious and terrible ideas sometimes
We all do. We’re trained as writers that serious stories are ones about sad white men. The brilliant stuff comes when you can unlearn those boring tropes and come up with something honest to your experience. That’s not to say you have to write about yourself, or someone who looks like you: but the best writing I’ve read has an emotional authenticity that’s hard to duplicate.

You don’t need an MFA
About every three weeks I lie awake in bed with my laptop propped open on my chest, frantically googling MFA programs. By morning, I usually realize that an MFA is not the solution to whatever problem I’m dealing with at the moment (writer’s block, frustration, messy room, loneliness). I sort of feel like getting an MFA is like purchasing an expensive gym membership: there are some people who will really benefit from the routine and the commitment, but there are some of us who imagine that it will be a magic spell that will instantly turn you into the type of person who actually exercises when all we need to do is lace up our gym shoes and go on a jog.

Pretentiousness comes from insecurity
The only reason to make someone feel bad about their lack of knowledge is if you feel as though you’re lacking in certain respects, as if their shame and diminishment makes you smarter. It doesn’t. People who gatekeep the literary world, (“You’re not a real [reader/writer/literary citizen] unless you’ve read [insert whatever book here]”) are fundamentally desperate for those sorts of gates, a clear marker to let them know that they are in the “in” group. The truth is, those gates don’t exist. It’s nebulous and terrifying.

Some people are worse than parody
There’s no arguing with some people, the kind who are awful and terrible and sexist and smug about it—that’s the worst part, that they’re smug in their awfulness, proud of it. As someone who spends an excessive amount of time on the internet, I see plenty of them. Sometimes it’s not worth the energy or the headache to argue with them. Just remember they don’t get to enjoy the joke.

No one is paying attention to the books you’ve read
When you die, the angel at the pearly gates isn’t going to judge you with a cosmic list of the books you made it to the final page of. No one is keeping score. If a book doesn’t connect with you, regardless of how “important” or “canonical” you think it might be, you’re allowed to put it down.

Life is so short, and the number of books a human can possibly read in a lifetime is limited. Spend the time on books you enjoy and don’t let anyone judge you for it. 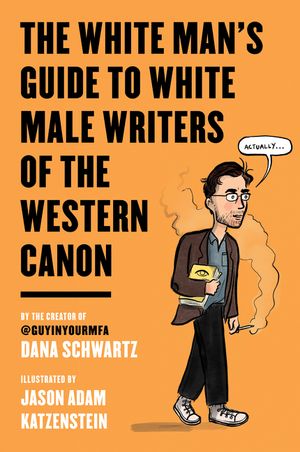 Dana Schwartz’s The White Man’s Guide to White Male Writers of the Western Canon is out now from Harper Perennial.

Dana Schwartz is the author of CHOOSE YOUR OWN DISASTER and the forthcoming humor book THE WHITE MAN’S GUIDE TO WHITE MALE WRITERS OF THE WESTERN CANON. She’s also the host and creator of the podcast "Noble Blood." 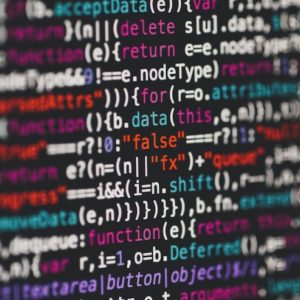 “I’m escorting you off the property,” my liaison informs me, her face flushed with anger. “Sure, I’ll just grab...
© LitHub
Back to top