What Does it Mean to be Presidential?

John Dickerson on One of the Hardest Jobs in the World

What does it mean to be presidential? Basically, to act in keeping with our highest expectations of the office. “Moral nature is a part of our humanity and people crave the maintenance of principles that have ensured order and prosperity,” wrote the conservative political scientist James Q. Wilson about our modern public life. For the ceremonial jobs only a president can perform, we expect behavior consistent with the scope of their duties, just as we’d expect a minister performing a wedding not to hit on the coat check girl at the rehearsal dinner. Whimsical gun instructors and leadfoot babysitters also demonstrate behavior at odds with their duties.

The president’s allies and press secretary say this is part of being a “counterpuncher,” an excuse that is beneath the traditional office and has no connection to the values of the office or duties of public life. “The standard in the executive branch was supposed to be different, higher, than for the legislative and judicial branches,” wrote Bill Bennett in The Book of Virtues. He was right. John Adams, who helped create that standard, agrees: “Because power corrupts, society’s demands for moral authority and character increase as the importance of the position increases.”

President Washington felt the country looking over his shoulder. That’s why he was so agitated about the fuss made over his inauguration. The scrutiny is written into the office. “From the very circumstance of his being alone,” Hamilton wrote, the president “will be more narrowly watched and more readily suspected.” Washington did not want the ceremonial pomp to overshadow his duty to the republic, which was to resist the posture of a monarch.

Franklin Roosevelt said to the famous actor Orson Welles, “Mr. Welles, there are two great actors in the United States, and you’re the other one.”

Washington’s concern carried over even to the way he dressed, because he knew the country was watching. As the historian Joanne Freeman writes, based on “the logic of the time, if national leaders dressed and behaved like aristocrats, the government would take on an aristocratic tone, the American people would adopt it, vote more such people into office, and in no time, the republic would fall.”

The idea of acting presidential was around before the presidency even existed. When George Washington arrived in Philadelphia for the Constitutional Convention in May 1787, he was greeted with the same flourishes and fuss that would later accompany his inauguration. Mounted dragoons accompanied his final mile. Young boys and Revolutionary War veterans lined the cobblestone streets and the bells pealed in the tower of Christ Church. Thirteen cannons announced his battered coach, which had traveled 150 miles, jostled by storms and mud. The forced shiatsu from the bad roads was another reminder of the weakness of the government. States, aligned in a loose archipelago of sovereignties, had no central authority able to create an infrastructure of connecting roadways. (The roads were so bad farther south that delegates from the Carolinas and Georgia traveled north by ship. )

His head and stomach aching from the ride, the 55-year-old Washington did not pause to rest. Instead, his journals record, he visited Benjamin Franklin moments after putting down his bags. Franklin, the president of Pennsylvania, was perhaps the only American more famous than the retired general. Washington’s visit showed respect. Their combined stature and reputation lent credence to the entire risky effort. “A union of abilities of so distinguished a body of men, among whom will be a FRANKLIN and a WASHINGTON, cannot but produce the most salutary measures,” wrote the New Hampshire Gazette of the Convention. “These names affixed to their recommendations… will stamp a confidence in them” that the opposition “will not dare to attack or endeavour to nullify.”

Visiting Franklin was the first of Washington’s symbolic moves in a public role that he had not formally been assigned, but that he intuited would be crucial to building support for the delegates’ radical new direction for American government. Washington’s role at the Constitutional Convention was not to quote Greek philosophers, or to negotiate difficult language in the new governing compact. His “colloquial talents were not above mediocrity,” as Thomas Jefferson put it, having “neither copiousness of ideas nor fluency of words.” His contribution in Independence Hall would be to light the quiet gray walls and baize- covered desks with the glow of his reputation and character, lending legitimacy and credence to a bold experiment.

Before the delegates started debating the new national government, they had to pick a president of their convention. Washington was the unanimous choice to take the speaker’s chair, a finely carved seat with a half sun painted on its crown. Each time Washington walked to the front of the room, his colleagues showed him deference. It was a rule of the order of the proceedings that “every member shall stand in his place, until the president pass him.” The ordered behavior was not superficial decorum, but a symbol of all that Washington had accomplished. All that he stood for in battle, but more important, what he stood for as a national leader who had repeatedly sublimated his personal ambition for the good of the republic. A proceeding that paid daily homage to those ideas into their work product.

Washington’s aura was ever present in the minds of his countrymen as they did their work. Like a model at the front of a figure-drawing class, Washington was there in that room – the same room where the Declaration of Independence had been signed eleven years earlier—to inspire. John Adams called Washington the finest political actor he had ever seen.

Other great presidents have embraced that title or been given it. Ronald Reagan asked how a president could not be an actor. Franklin Roosevelt said to the famous actor Orson Welles, “Mr. Welles, there are two great actors in the United States, and you’re the other one.”

The delegates were about to decide the matter of the presidency with no discussion.

The power of Washington’s example was so strong that it almost killed the discussion. As delegates addressed the issue of the chief executive of the new government, they weighed whether to create a single president or a committee. Delegate James Madison, who took careful notes during the summer, described the moment when nothing nearly happened:

The committee of the whole proceeded to Resolution 7, “that a national Executive be instituted, to be chosen by the national Legislature for the term of – – years… to possess the executive powers of Congress &c…”

Mr. WILSON moved that the Executive consist of a single person.

Mr. C PINCKNEY seconded the motion, so as to read “that a National Ex. To consist of a single person, be instituted.”

A considerable pause ensuing and the Chairman asking if he should put the question.

A considerable pause ensuing. The delegates were about to decide the matter of the presidency with no discussion. In the previous days of their deliberations, they had picked over every little question they came upon as they obsessed over how to distribute power so that it would not be abused. In this moment, though, they were ready to decide quickly.

The members of the convention took that “considerable pause” because they all assumed George Washington would take the job they were creating. (As David O. Stewart put it, the framers of the Constitution “wrote General Washington’s future job description.”) Since that was the case, there was no reason to debate whether the executive should be one man or a committee. Anyone arguing that the executive had to take the form of a committee would be implying that Washington wasn’t up to the job, or that he was susceptible to the corruption that a committee was intended to prevent. To argue for a committee would be to argue against Washington’s capacity for virtue, the whole reason he’d been put at the head of the class in the first place. Only Benjamin Franklin was brave enough to break the impasse and encourage more debate on the issue. 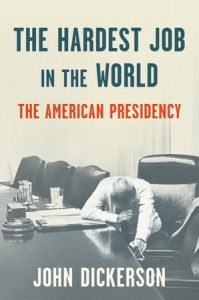 Excerpted from The Hardest Job in the World: The American Presidency © 2020 by John Dickerson. Published by Random House, an imprint of Penguin Random House LLC. No part of this excerpt may be reproduced or reprinted without permission in writing from the publisher.

John Dickerson, author of The Hardest Job in the World, is 60 Minutes correspondent. Prior to that, he was a co-host of CBS This Morning, the anchor of Face the Nation, and CBS News’s chief Washington correspondent. Dickerson is also a contributing writer to The Atlantic, co-host of Slate‘s Political Gabfest podcast, and host of the Whistlestop podcast. Dickerson won the Ford Prize for Distinguished Reporting on the Presidency as Slate‘s chief political correspondent. Dickerson covered the White House for Time during his twelve years at the magazine. The 2020 presidential campaign will be the seventh he has covered.

James McBride on 'The America that I write about when I write my books.'

A Brief History of the Policing
of Black Music 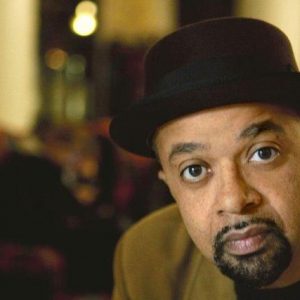 James McBride on 'The America that I write about when I write my books.'

Bum-Bum, Elephant, Hot Sausage, and Sportcoat. Just a few of the characters created by the brilliant mind of James McBride,...
© LitHub
Back to top
Loading Comments...